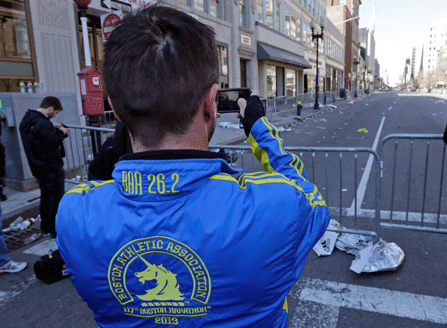 Paul McRae, who finished the Boston Marathon before bombs went off near the finish line, takes a photo of Boylston Avenue near the end of the marathon course. Photos and video of both before and after the blasts led to the suspects. (AP)

Video was a critical component in finding the bombers responsible for the Boston Marathon bloodbath. Even as first responders arrived on the scene, police were already securing video footage from the vast network of surveillance cameras keeping watch over downtown Boston.

Since 9/11, law enforcement agencies have used federal grants to buy surveillance cameras for areas across the country plagued by crime or potentially targeted for terrorism. A surely outdated count from 2007 said downtown Boston was watched by a network of at least 147 police surveillance cameras. On the marathon route, it's likely that most businesses have surveillance cameras, along with every ATM and red-light traffic device with a license plate reader. Not to mention every spectator with a camera phone.

Combing through video evidence is the new standard in dealing with crime in public, says Grant Fredericks, a forensic video analyst who teaches forensic video technique at the FBI National Academy in Quantico, Va.

“Video holds more evidence than any other source: more than DNA, crime-scene analysis or eyewitness testimony,” Fredericks said. “There are people sitting at home with key evidence sitting on their hip. I think the concern going forward is getting to the video before people erase it, and ensuring that the best evidence is recovered.”

The buildup of the police surveillance network has not gone unchallenged. An effort by the Electronic Privacy Information Center thwarted the installation of 5,000 surveillance cameras in Washington, D.C., in 2008 after the D.C. Council refused to appropriate $866,000 to pay for it, citing privacy concerns. Activists in Seattle have for more than a year prevented a surveillance camera system from being installed along the waterfront of Puget Sound.

The task for police was daunting. So far, there is no software capable of singlehandedly processing large amounts of video. Analysts must watch the thousands of hours of video footage collected from surveillance cameras and spectators.

But there is gold to be found. “If you look at events in Boston,” Fredericks said, “how many people were down at the site for setup or cheering on racers? Hundreds of thousands. And how many of those people had cameras? Practically everyone…There are hundreds of hundreds of still photos and videos of the suspect and police don't know quite how to get at it. But it's there, guaranteed.”

By late last week, law enforcement had zeroed in on the Tsarnaev brothers. Making their photographs public scared them into the second crime spree that left one of them dead and the other in the hospital and charged with the Boston Marathon casualties.

Boston's camera saturation is the norm in major cities. Grants from the Justice Department, Department of Homeland Security and other smaller grants to the Port of Boston allowed the city to amass hundreds of cameras since 9/11, both to monitor for national security and to deter street crime.

In the 1990s, Chicago was one of the first major cities to use police cameras to monitor high-crime areas plagued by gang violence and street-level drug crime. The cameras have also been part of policing in all major cities. In a study of police cameras in Baltimore, researchers found that after four months of setting up the cameras downtown, crime in that area was down by about 25 percent, according to a study from the Urban Institute.

The key isn't just having cameras; real-time monitoring and full integration of the cameras must be part of regular policing, said Nancy La Vigne, lead author of the report. It would be a struggle to find an area without at least some surveillance cameras, said La Vigne, but the saturation necessary to see every activity isn't typical.

In other mass attacks, the video system was the key investigative tool that police used to identify suspects.  It was video analysis that led police to the perpetrators of the 2005 London subway bombings in the city's Tube system. Researchers in 2006 estimated that the United Kingdom was saturated with about 4.2 million surveillance cameras, or one camera for every 14 people, according to a study from the British Home Office.

After riots broke out in Vancouver after the Vancouver Canucks lost the Stanley Cup final to the Boston Bruins, a team of 52 analysts led by Fredericks, the FBI instructor, reviewed over 5,000 hours of video to identify 60 individuals engaging in criminal rioting by infusing metadata on the video. That means embedding data and time stamps into the video, or inserting GPS information on people's location on a sidewalk and tracking what direction they're travelling.

The video then went into a searchable database which identified 15,000 individual criminal acts. Police said more than 1,000 charges have been filed against 351 people since riots on June 15, 2011.

That metadata will be the key in making sense of the mountains of footage from the Boston bombings, says Ron Brooks, the former director of the Department of Homeland Security's San Francisco fusion center, an information-sharing operation.

“It goes beyond cameras—it's our ability to use license plate reader systems, facial recognition technology, time stamping to develop a timeline, location data to develop a map of the scene and track the movement of people, placement of packages and layer in other data, like eyewitness accounts, to develop the picture and chronology of the event.”

That analysis, often described as “big data”, comes with a lot of privacy concerns, says Amie Stepanovich, director of the domestic surveillance project at the Electronic Privacy Information Center. Many worry that this video is stored indefinitely in databases without rules for how it can be used.

“(The bombing) is a terrible thing. We want to make sure the right person gets caught. We're hoping that law enforcement will use this technology in a legally responsible manner,” Stepanovich said.

But few police departments have policies on data retention, and these videos will likely be stored permanently since the bombings will probably be a death penalty case, Fredericks said. Even though the privacy concerns are legitimate, he said, they're not needed.

“When you have an ongoing investigation, the target is the terrorist, not the watcher of the race,” Fredericks said. “There's a target (in the investigation) and there's no way to keep track of all the people's movements who aren't a criminal.”

The future of evidence

Much of the video analysis of the footage collected in Boston occurred at state fusion centers, created by the Department of Homeland Security to be the funnel point for intelligence from agencies at all levels of government and across the country.  In the Boston investigation, the fusion centers in Massachusetts, New Hampshire and other New England states immediately stepped up to help process evidence and review video to develop leads. Brooks said this collaboration is the result of 12 years of emergency preparedness policymaking.

“On 9/11, we had not developed the protocols and ability to share information,” said Brooks. “Now today, you saw an immediate collaboration between ATF, FBI, Boston police, Massachusetts state police, the fusion centers, and the Department of Homeland Security. Everyone came together quickly and understood their roles, and we didn't see any infighting.”

Going forward, Fredericks expects that every police department, no matter how small, will have to get comfortable analyzing video evidence, just like they evaluate other kinds of forensic evidence.

“When you have crime in public areas where public is aroused to crime, you can guarantee there will be video evidence on cell phone or a camera,” he said “Video provides a chronology from before an event was planned until the arrest if you get to it soon enough. You don't know yet what you have, so you have to get everything.”