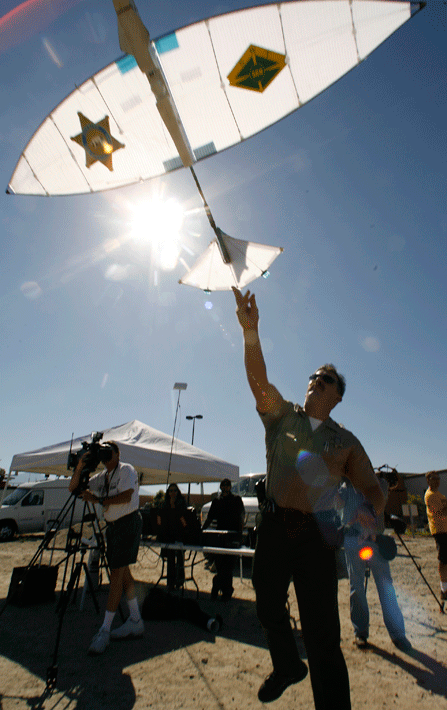 Los Angeles County Sheriff's Deputy Troy Sella launches an autonomous drone aircraft used by the military and law enforcement for surveillance and reconnaissance. Two states recently restricted the use of such drones, and several others are set to follow suit. (AP)

Two states recently restricted the use of domestic drones, and several other states look ready to follow suit before their legislatures adjourn.

Earlier this month, Virginia enacted a two-year moratorium on drone use by police and regulatory agencies. The law includes exceptions for missing-person searches and National Guard training exercises.

And last week, Idaho became the first state to require police to obtain warrants before using surveillance drones over homes, businesses or farm fields. In Florida, a similar measure is awaiting the governor's signature, and lawmakers in Montana and Tennessee are moving in the same direction. In Virginia, Idaho and Florida, lawmakers voted unanimously in favor of the drone limits.

Other legislation that would limit police drone use is still active in 29 state legislatures, according to the American Civil Liberties Union.

“Privacy should be protected,” Florida Gov. Rick Scott, a Republican, said after the Florida House approved that state's bill. The warrant requirement in the measure does not apply to imminent terrorist threats, missing-person searches or the pursuit of fleeing criminal suspects. “This law will ensure the rights of Florida families are protected from the unwarranted use of drones and other unmanned aircraft. I look forward to signing it.”

Lawmakers are responding to the proliferation of drones in domestic policing. Nine law enforcement agencies in six states already use drones, and another nine have applied to the Federal Aviation Administration for permission to do the same, as Stateline has previously reported. Police in Miami-Dade County have a Honeywell T-Hawk drone, which is about the size of a small office trash can and runs on a fan about as loud as a leaf-blower. The Federal Aviation Administration has given Miami-Dade police permission to use the drone to survey crime scenes.

The bills requiring warrants would exclude any evidence a drone obtained without a warrant. In Idaho, people who are illegally watched can sue for damages.

These bills are being debated even as states are competing to be one of the six Federal Aviation Administration test sites for drone integration into domestic airspace. At least 37 states are in competition to be selected for the program, which they hope will bring jobs and drone manufacturing companies to their states, according to the Los Angeles Times.

"It's the chance to get in on the ground floor of what may be the next big business,"  Peter Singer, a robotics expert at the Brookings Institution, said in an interview with the Associated Press. "The states competing hope it might make them the robotics equivalent of Detroit for automobiles in the 20th century or Silicon Valley for computers."

Despite the potential for job growth, privacy concerns are driving the debate in states and in Washington, D.C. At a Senate Judiciary Committee hearing in March of this year, Republicans and Democrats expressed the same concerns about constant government surveillance and the need for privacy limits before drones become more ubiquitous.

“We would all like to see new jobs,” California Sen. Diane Feinstein, a Democrat, said at the hearing, “but I've seen drones do all kinds of things (in warfare) and I think those things should bring us great caution.”

“Government should not be able to engage in constant surveillance,” said Iowa Sen. Charles Grassley, a Republican. “Always hearing buzzing drones is counter to what it means to live in a free society.”