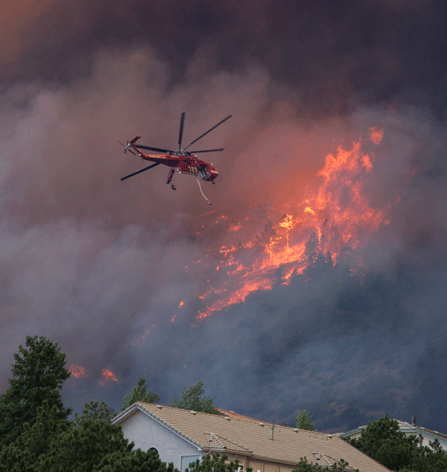 The Western Governors Association wants the U.S. Forest Service to do more to protect millions of acres of federal forests ravaged in recent years by invasive pests and wildfires.

How might the cash-strapped agency do that? Expand public-private partnerships, the governors say.

“We have been concerned for some time that federal forest lands throughout the West are experiencing serious environmental stresses that affect the health and vitality of these ecosystems,” wrote Utah Gov. Gary Herbert, a Republican, and Colorado Gov. John Hickenlooper, a Democrat, in a letter delivered Tuesday to Agriculture Secretary Tom Vilsack. “They are overgrown; they exhibit all the symptoms of an unhealthy ecosystem; and they demand urgent attention.”

“Now is the time for the U.S. Forest Service to accelerate its efforts,” they wrote.

The governors asked Vilsack to form a “forest industry task group” to find ways for private loggers to help manage the forest and lessen the government's workload. For example, loggers might help remove dead branches and trees that can easily ignite, while marketing salvageable wood. The governors said more needs to be done to prevent problems before they spread and grow more costly.

Western bark beetles, led by the mountain bark beetle, chewed through more than 46 million acres of forest between 2000 and 2012, according to the Forest Service. And last year, an ongoing drought helped produce fires that burned more than 9 million acres of U.S. land, much of it in western forests. This year, those fire threats are expected to remain high across Colorado, New Mexico, Arizona, and Southern California.

Together, the beetles and fires have claimed lives, destroyed homes and animals' habitats, and harmed a timber industry key to rural economies. They also have cost federal and state governments billions of dollars: Last year, the federal government spent about $1.45 billion just on fire suppression.

According to the governors' letter, in 2010 the forest service used just 30 percent of its budget for forest management, down from nearly 70 percent three decades ago. Currently, most of the agency's budget pays for fire suppression, administrative support and research.

“The current approach to resource allocation results in fewer funds available to manage the more than 193 million acres of national forests for forest health and fuels reduction,” the governors wrote.

Meanwhile, sequestration has eaten away at the agency's firefighting resources, which it says it must cut by 37 percent. On Tuesday, U.S. Forest Service Chief Tom Tidwell told a U.S. Senate committee the agency will lose 500 firefighters and 75 fire engines and have less money to spend on aircraft.

In a statement emailed to Stateline, the Forest Service said it “has adopted an aggressive forest restoration program.”

That includes its recently released Forest Restoration Strategy, a plan to protect more acres by using controlled burns to thin brush and remove dead and dying trees, while selling any salvageable wood.

“Over the last four years, the Forest Service increased the amount of timber sold over the previous four years and has set ambitious targets for continuing to treat additional acres on the National Forests,” the agency said. “The Forest Service is already working with municipalities, water utilities and private corporations to increase funding for restoration treatments.”

They agency says it has also spent more than $100 million each year to combat the bark beetle epidemic.  Since 2009, the beetles' reach has diminished by nearly 60 percent, according to its data.

The governors support those efforts, but in their letter they request state-by-state specifics on how the agency plans to meet its benchmarks.

“Achieving the goals of this strategy will require developing and implementing new, more efficient ways of doing business,” the governors wrote.