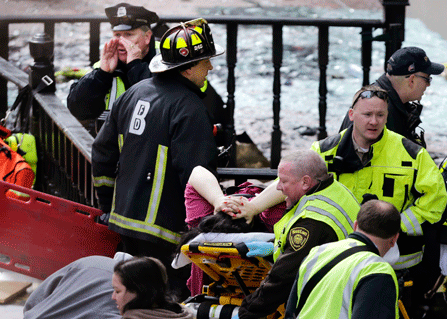 Medical workers help a wounded woman after the Boston Marathon bombings, while firemen and police help direct the chaos. Homeland Security grants to the states have been gutted since 2010. (AP)

In the aftermath of the Boston Marathon bombing, the state of Massachusetts, the city of Boston and federal authorities quickly joined together to respond to the emergency. But in recent years, federal funding for state homeland security efforts to respond to emergencies has been gutted.

The grants are intended to help states purchase equipment and create plans for responding and recovering from terrorist attacks or other catastrophes. 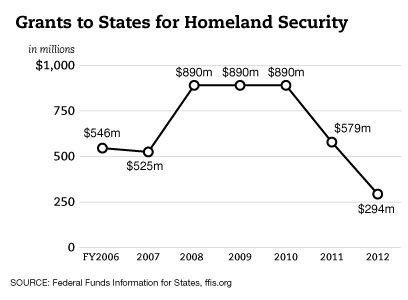 Not only is the overall funding down, but domestic attention has not been placed on responding to bomb threats, said Ben Bawden, a government affairs consultant representing state and local public safety organizations, including the National Fusion Center Association and the Association of State Criminal Investigative Agencies. Bombing has traditionally been an overseas concern, said Bawden, and state and local agencies aren't getting training on how to respond to bomb emergencies.

On the likelihood of a domestic bombing, Bawden said, “It's been a fatalistic view by state and local law enforcement agencies. We just don't have a good way to increase the level of awareness or ability to detect and mitigate bomb threats and they (law enforcement officers) are all saying, ‘it's just a matter of time before someone explodes a bus, a car or a trash can.'”

At the federal level, the Homeland Security grants have been a frequent subject of critics decrying spending waste and abuse. The arguments against the grants are staggering. According to a report assessing the usage of federal grants on homeland security spending in cities, officials in Michigan used DHS grants to purchase 13 sno-cone machines and officials in Cook County, Ill., spent $45 million on a failed video surveillance network. And in the landlocked city of Columbus, Ohio, officials used a $98,000 grant to purchase an “underwater robot” which local officials explained would be used to assist in underwater rescues.

In per capita spending, the grants were disproportionately awarded to smaller states with fewer homeland security risks. Of the top five states in per capita funding, only Washington, D.C. is a likely terrorism target. New York, which took the brunt of the 9/11 casualties, is ranked 10th.

Oklahoma Sen. Tom Coburn has led the charge against waste in the DHS grant programs, which he says lack clear intent. “We cannot secure liberty and guarantee security simply by spending more and more money in the name of security,” Coburn wrote in a Senate oversight committee report in December. “Every dollar misspent in the name of security weakens our already precarious economic condition, indebts us to foreign nations, and shackles the future of our children and grandchildren.”

Despite the momentum of cuts at the federal level, Bawden said he expected that in the coming days the success – or not – of interagency collaboration could inform DHS grant allocations and guidance.

“We are going to see state and local law enforcement, lawmakers and governors saying that they want to take steps to minimize this; that need the resources to train people to respond, and minimize this from happening again,” he said.