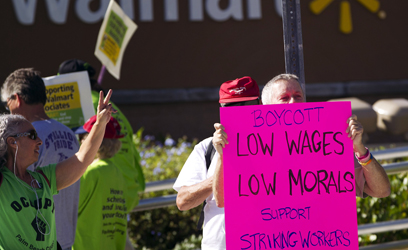 Walmart workers and supporters launched demonstrations and walkouts at hundreds of stores across the country on Black Friday. Labor leaders are discussing ways to support and harness the energy of worker groups that are not traditional collective bargaining units.(AP)

CHICAGO — Organized labor is no longer in denial about its dwindling numbers and diminished political power: Unions lost 400,000 members last year, and states like Indiana and Wisconsin have clipped the organizing rights of state employees and others. These changes are driving traditional unions toward innovative, but potentially risky, new approaches.

The new ideas being explored are rooted in the belief that many more workers than the 14.4 million who currently belong to labor unions would organize in some way if they had the opportunity. Jorge Ramirez, president of the Chicago Federation of Labor, said the fact that 60 million workers say they would join a labor union today if they could often gets lost in the public dialogue about labor's future. “They write the obituary and they throw out these numbers as if this is really what the state of labor is,” he said. “But what they don't say is how many people want one.”

Labor leaders see the largest growth potential in the private-sector — the overwhelming majority of the country's workforce — where union membership as fallen farther and more quickly than in the public sector. According to Bureau of Labor Statistics data, only 6.6 percent of private-sector workers belong to a union, compared to 35.9 percent of public-sector workers.

The trend of declining union membership in general over the past 20 years continued in some states that passed right-to-work laws last year allowing workers to decide whether they want to join or financially support a union. Total union membership in Indiana declined by two percent in 2012, from 11.3 percent to 9.1 percent of all workers. Similarly, Wisconsin saw a two percent decline in union membership in 2012, following major restrictions on collective bargaining rights championed by Governor Scott Walker in 2011.

Labor leaders see reason for hope in the growth of non-union groups that are finding unconventional ways to represent workers in difficult-to-organize industries such as warehouses, retail and restaurants, and are exploring ways to partner with and support those efforts. “(These groups) work with a big portion of workforce that is underrepresented and exploited and potentially could represent a renaissance in the labor movement,” said Bob Bruno, director of the University of Illinois Labor Education Program. “Those workers are being served by a lot of organizations that aren't unions but are working for the empowerment of the working class.”

Richard Trumka, president of the AFL-CIO, was blunt about labor's challenges at a conference here last month that brought together key labor leaders, academics and community groups to discuss “New Models of Worker Representation.” The AFL-CIO is a federation of 57 labor unions that represent more than 12 million private- and public-sector workers.

“This subject, new models and ways to represent workers, carries an implicit criticism of the model the labor movement uses today,” Trumka said. “Some people think accepting criticism is a mark of vulnerability, but I'm really not concerned about appearing vulnerable because working people and labor unions have been vulnerable for years. No amount of bluster or head-in-the-sand insistence that everything is fine will change that reality.”

AFL-CIO leaders have launched a 6-month-long planning effort to come up with more viable union models. New approaches will be discussed and finalized at its convention in September.

The industry sectors that are most difficult to organize using traditional methods have high turnover rates, a high proportion of temporary workers and often involve large corporations. They are also growing far more quickly than historical organized labor strongholds, such as manufacturing and construction.

Organizers of these unrepresented groups are encouraging workers to exercise their rights under the National Labor Relations Act, even if they can't secure formal collective bargaining rights. According to some at the conference, it has become almost impossible to get the National Labor Relations Board to certify a new bargaining unit, especially since the board is so understaffed. Therefore, they argue, it makes sense for workers to pursue more immediate forms of representation. On Friday, the U.S. House of Representatives voted to freeze all NLRB decisions until a legal dispute over President Barack Obama's recess appointments to the board, which he made in January 2012, is resolved.

“While there are gains to be made using the current system, ultimately we need to figure out a way to build worker power outside of the current system of labor law in this country, which is broken,” said Mark Meinster, campaign director for Warehouse Workers for Justice, a nonprofit group that works to promote better conditions for employees who work in the supply chain of major retailers, including Walmart.

“Change is going to happen by workers coming together in the workplace and taking action to hold their employers accountable, and we're starting to see that,” Meinster said.

One example of these efforts was the Walmart worker demonstrations on Black Friday, which Dan Schlademan, director of Making Change at Walmart, said brought out thousands of workers and crippled store operations at a time when high sale volumes are critical to overall profit margins.

“Too often we just think about the question of a union as collective bargaining,” he said. “We define what a union is or what a worker organization is just under the terms of collective bargaining.” Schlademan said Walmart workers “are using collective action every single day in the stores to fight against Walmart, to make changes. They're using their ability to strike, to build a bigger message about what is wrong with this company.”

Walmart spokesperson Dan Fogleman said the Black Friday job action had no impact on store operations and participants were not representative of Walmart's 1.3 million employees nationwide. “If you look at the number of people who work for us that have actually taken part in some of the union-led demonstrations, it's a very small number,” he said. “To give you some context, on Black Friday last year there were only a few dozen associates who participated in the handful of union-led demonstrations that took place."

Still, the company is seeking a permanent injunction against what Fogleman calls “illegal trespass activity in our stores.”

“They have ignored trespass warnings from police, as well as cease and desist letters sent to their lawyers,” he said. “So, we felt it was important to seek assistance from the court in order to protect our customers and associates from further instances of business disruptions by the union's unlawful actions. The union's illegal activities have to stop.”

Percent of all workforce represented by unions in 2012

Some are hopeful that the labor movement might be able to harness the energy of these groups by persuading the National Labor Relations Board to affirm “minority” or “pre-majority” unions. Under that framework, warehouse workers or retail employees would sign up members and bargain on behalf of a smaller group until they reached the 50 percent threshold and went through the traditional certification process.

Charles Morris, a professor emeritus at the Dedman School of Law, supports requiring employers to bargain collectively with unions representing less than half of workers. “From the beginning, their organizing cry will be ‘union now,' rather than ‘union maybe if we have an election,'” he said. Any negotiated agreements would apply only to members.

Morris argues that minority unions are allowed under the National Labor Relations Act and were commonly used in the 1930s and 1940s to organize autoworkers, steelworkers and other groups. They went out of favor only because unions chose to rely on elections instead.

Morris told Stateline he was impressed by the efforts of Walmart retail and warehouse workers. But he believes his approach is the only way these workers could achieve meaningful change.

A range of unions and legal scholars have endorsed the concept in the past, but they would be unlikely to push the issue with the National Labor Relations Board until the board is fully staffed and functional.

Still, the concept of minority bargaining appears to be gaining traction. “Charles Morris' work has really impacted the way that people are thinking about the National Labor Relations Board and what the law can do,” said Liesl Orenic, director of American Studies at Dominican University and a participant in the conference. “There's this kind of pocket of opportunity that needs to be tested.”

What the relationship between organized labor and the newer models will look like is a complex question. Some of the new groups involved don't see themselves as a steppingstone to union membership.

Catherine Murrell, a spokesperson for Fight for 15, a group representing low-wage food and retail workers in Chicago, said one of the reasons her organization's approach works is that organized labor is just one piece of a larger community alliance that is helping workers.

“Our real focus isn't on partnering with unions per se,” she said. “Our real focus is on growing our membership and on folks just finding their voice.” Murrell said that there's no easy model for them to follow, because unions typically don't represent fast food or low-wage retail workers.

On the organized labor side, too, forming close working relationships with outsiders doesn't come naturally and will take time. Bruno, of the University of Illinois, said it's remarkable that the AFL-CIO is considering more formal partnerships with outsiders, possibly including some form of dual membership. "What the labor movement is opening itself up to is becoming a labor movement instead of labor institutions,” he said.

Such partnerships will be tricky because organized labor and community groups haven't always seen eye to eye, Bruno said. Some union members might not like the idea of a portion of their dues going to help people who may never become full, dues-paying union members. They might say, “We understand if we're organizing them into our union, but if not, why are we doing this?” Bruno said.

Trumka has a standard answer for skeptics within labor's ranks, he said in an interview with Stateline. “I keep asking this question, 'So, all this stuff you've been doing, how's it been working out for you?'”