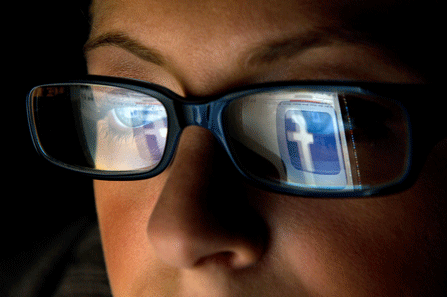 Facebook's logo is reflected in the eyeglasses of a user in San Francisco. Facebook is working with state attorneys general on an online safety campaign for young social media users. (Getty)

Facebook's safety team will provide video tutorials and a privacy tip sheet. Maryland Attorney General Douglas Gansler, who serves as president of the National Association of Attorneys General, announced the initiative Monday at a summit on digital privacy that brought together attorneys general from around the country.

“Teenagers and adults should know there are tools to help protect their online privacy when they go on Facebook and other digital platforms,” Gansler said. “We hope this campaign will encourage consumers to closely manage their privacy and these tools and tips will help provide a safer online experience.”

Facebook is used to being in the spotlight over privacy issues, but in a less favorable light as critics have blasted its practices as invasive and needlessly complex. In August, the social networking giant agreed to make major changes in a Federal Trade Commission settlement over charges that it deceived customers by telling them that they could keep their information on Facebook private, and then repeatedly allowing it to be shared and made public anyway. The settlement requires Facebook to undergo regular privacy audits and to give consumers clear and prominent notice and obtain their consent before sharing information beyond their privacy settings, among other changes.

In the public service announcements, state attorneys general and Sandberg encourage teens and parents to actively consider privacy issues on Facebook and in the broader online world.

“At Facebook, nothing is more important than keeping young people safe online,” Sandberg says in the announcements, which will be marketed online beginning later this week. “That is why we are working with the Attorneys General to provide parents and educators with advice and resources about online safety …  I hope you and your family find them useful in making safe, smart and responsible choices online. The Internet is an amazing place. Let's help our kids get the most out of it.”

The broader issue of young people's right to privacy on the Web was a key focus of the attorneys general summit.

Some participants praised an updated Federal Trade Commission rule issued in December that expand protections for children under 13 under the Children's Online Privacy Act of 1998 but worried about the privacy for teens who fall outside of that age range. The rule requires operators of websites and online apps directed at children to obtain parental consent before collecting or sharing personal information, including everything from first and last names and addresses to geolocation data, photos and videos.

Jim Steyer, CEO and Founder of Common Sense Media, urged the attorneys general to go beyond public education and take direct action to hold companies accountable for their privacy practices.

He voiced particular concern about the privacy practices in the increasingly popular world of mobile apps, which he called the “Wild West” of privacy. “A lot of the apps makers don't care a bit about privacy issues, particularly as they relate to children and teens,” he said.

Marc Rotenberg, executive director of the Electronic Privacy Information Center, also voiced concerns about the efficacy of public information campaigns absent other action. “Consumer education is among the least effective things you can do with this particular issue,” he said.

“The reason for that is there is no simple message.”  Safety campaigns asking consumers to fasten their seatbelts or “reduce, re-use, recycle” work because they are clear and actionable, he said.

He said the onus shouldn't be on consumers to keep up with every-changing policy practices. “There is no reason that a customer should have to go back and check their privacy settings when a company changes its business practice,” he said.