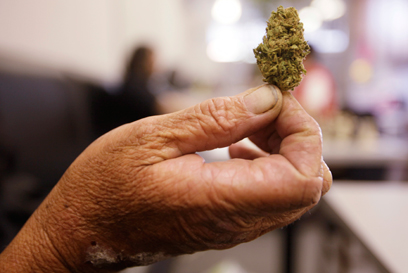 Consumers in 21 states can, under state law, legally use marijuana for medical or recreational use, all while the substance remains illegal under federal law. For federal authorities, trying to invalidate those state laws could prove difficult, according to a new report. (AP Photo/Eric Risberg)

The federal government may not have much choice but to continue its mellow attitude toward legal marijuana in Washington and Colorado.

New laws legalizing recreational marijuana use in Washington and Colorado probably fall under the states' "power to decide what is criminal and what is not," according to a new report from the Congressional Research Service (CRS). The report analyzes court precedent and lays out what the Justice Department and the Obama administration might do to enforce federal law now that several states have passed marijuana laws that contradict it.

The agency's conclusion:  The feds face an array of unappealing options.

The Justice Department could choose to challenge the marijuana laws in federal court, according to CRS. However, the researchers cast doubt on the argument that that the state laws preempt federal authority, or directly violate the intent of the federal Controlled Substances Act, which classifies marijuana as a Schedule I drug, just as dangerous as heroin and LSD.

But if a legal victory is a long shot, so is trying to enforce federal law without one, according to CRS.  Without the cooperation of the states, CRS notes, federal agents simply do not have the resources or manpower to arrest and prosecute every person who violates the federal Controlled Substances Act by growing, selling or using marijuana.

At the same time, according to the report, declining to enforce the federal law may "pose a threat to federal supremacy by acknowledging that states are free to make policy decisions in direct conflict with those made at the federal level."

In November 2012, voters in Washington and Colorado agreed to directly challenge the federal marijuana prohibition and legalize the growing, selling and consuming of marijuana for all people age 21 and older. State officials have spent the last few months working on regulatory schemes that would not run afoul of federal authorities, who have so far taken a hands-off approach to marijuana enforcement in both states.

Attorney General Eric Holder still has not given any indication of the administration's response to the laws and has remained silent since testifying at a Senate hearing in March that "we've had good communication (with Colorado and Washington) … I expect that we will have an ability to announce what our policy is going to be relatively soon."

The legal ambiguity laid out in the report hasn't stopped more states from moving forward with changes to their marijuana laws. Maryland lawmakers just approved a bill allowing the medical use of marijuana, and New Hampshire lawmakers seem to be heading in the same direction. Nevada lawmakers are debating a medical marijuana law and a bill to legalize and regulate marijuana that is similar to the laws passed in Colorado and Washington. Vermont also is well on its way to decriminalizing the possession of small amounts of marijuana.

Since 2009, the Justice Department has made prosecuting individual marijuana users a low-level priority, which has made the states feel more comfortable loosening marijuana restrictions.  Currently 19 states and the District of Columbia allow for some medical marijuana use.

States also are responding to evolving public opinion. For the first time since polling began on marijuana legalization in the 1960s, a majority of Americans now favors legalizing marijuana, according to a new Pew Research Center poll. The poll found that 52 percent of Americans say that marijuana use should be legal and 45 percent say its use should remain illegal.