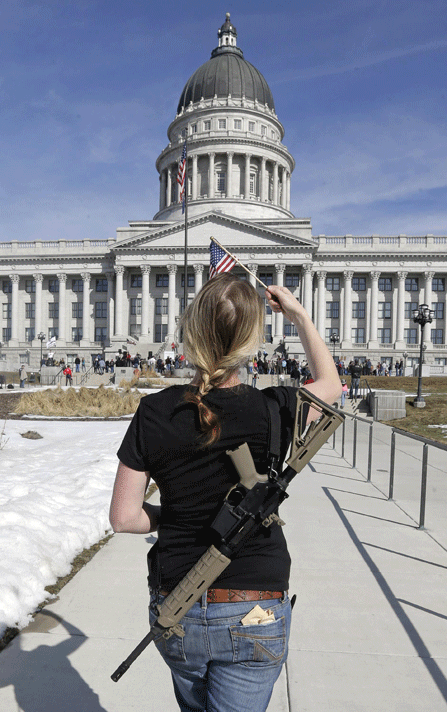 Gun rights activist Siri Davidson carries her AR-15 as she walks toward the Utah State Capitol at a gun rights rally on March 2. So far this year, 15 states have adopted laws to loosen gun restrictions and four states have passed laws to tighten gun regulations. (AP)

New this year: South Dakotans can now carry concealed pistols while riding their snowmobiles. And Arkansas and North Dakota residents are now free to bring their guns to church, as long as their pastors say it's alright.

A dozen other states also have eliminated some gun restrictions this year. Four states have gone in the opposite direction, tightening their gun laws in the wake of the mass shooting last December in Newtown, Conn (see table below).

The speedy passage of gun laws in the states reflects the fact that in many of them, one party dominates the political landscape. Following the 2012 elections, a single party now controls both the governor's mansion and the legislature in a whopping 37 states—sometimes with a nearly unbeatable “supermajority.” The result has been a torrent of new laws related not only to guns but other issues ranging from abortion to taxes.

The action in the states stands in stark contrast to the situation in Washington, where split party control has slowed gun-related legislation—and all other legislation—to a crawl. The U.S. Senate, led by Democrats, began debate Thursday on a bill expanding background checks, making gun trafficking a federal crime and boosting federal funding of school security programs. But it is unclear whether that measure—or any other gun-related proposal—will clear the House, where Republicans hold the majority.

“At the same time Washington, D.C. is getting more gridlocked, we're seeing this historic moment of supermajorities in the states and legislation is speeding through the statehouses,” said Thad Kousser, professor of political science at the University of California at San Diego. “Government wouldn't be working well if, in states where they wanted more or less gun regulation, that wasn't reflected in the laws being passed.”

“Nothing focuses your attention like 20 babies being killed,” said Connecticut Gov. Dannel Malloy, speaking about his change in legislative priorities following the mass shooting at Sandy Hook Elementary School in Newtown, in an interview with Stateline.  Last week, Malloy signed a measure that expands Connecticut's assault weapons ban and requires anyone who already owns gun with a high-capacity magazine to register with the state. It also allocates $15 million for school safety and mental health programs.

Despite the fact that Democrats have a solid majority in Connecticut and did not need Republican support, the bill passed with bipartisan backing.

Even though the Newtown shootings took place in neighboring Connecticut, New York was the first state to tighten its gun restrictions after the tragedy.  New York lawmakers passed a series of new gun restrictions that banned large-capacity magazines, increased the penalty for using a gun during the commission of a crime and increased restrictions keeping guns away from people with mental illness. Democratic Gov. Andrew Cuomo signed the bill within two days of the opening of the legislative session, with support from a group of conservative Democrats who caucus with Republicans to control the state Senate.

Colorado, which had just switched to one-party Democratic control after the 2012 election, followed suit at the urging of Democratic Gov. John Hickenlooper, whose stance on gun control evolved in the days following a mass shooting at a movie theater in Aurora, Colo., last July.

In Colorado, one-party control made all the difference, said Seth Masket, professor of political science at the University of Denver.

“It was surprising to me and others that Colorado passed these gun control bills so readily, even under Democratic control, given the state's political culture and the large number of gun owners in the state,” Masket said.

Maryland, where Democratic Gov. Martin O'Malley has overwhelming Democratic majorities in both the House of Delegates and the Senate, also recently passed a bill to limit the size of gun magazines and require additional licensing of gun owners.

While some Connecticut Republicans supported the states' new gun restrictions, most Republicans in other states have been solidly opposed to any additional gun regulations.

In Tennessee, where Republicans control both the legislature and the governor's mansion, permitted gun owners can now keep their guns in their cars, no matter where they park them. Wyoming approved a law allowing judges to carry guns into their courtrooms. And several GOP-dominated states approved laws recognizing concealed carry permits from other states.

Earlier in the year, when it looked as though Washington might take dramatic action on gun policy, lawmakers in at least 15 states specifically drafted bills that would have made it a crime to enforce new stricter federal gun laws. None of these bills has become law, however.