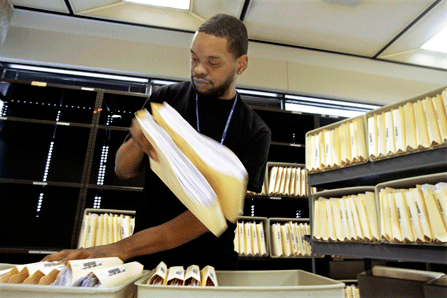 State worker Michael Taylor files tax returns in Illinois. Many states offer free online filing if you use the correct website in an effort to promote more electronic filing. (AP)

Haven't filed your state income tax yet? There's a good chance your state allows you to file it online for free.

More than 20 states offer “State FreeFile” programs that are similar to the federal IRS FreeFile Program. Both use outside vendors to prepare free returns for taxpayers with incomes below a certain threshold.

But there's a catch: Eligible taxpayers must follow the link from the state website, not any other link. If you don't follow the precise instructions, you could find yourself with a charge of as much as $19.99 when you are ready to click the “send” button, said Verenda Smith, deputy director of the Federation of Tax Administrators.

“You have to navigate some pretty rough waters to make sure you get your free tax filings,” Smith said. FTA has a 50-state map showing which states have these programs and provides links to the websites.

The remaining states that levy an income tax offer their own free web-based forms that generally allow any taxpayer to file directly with the state, regardless of income. But these forms are just online versions of the paper tax forms, and aren't connected to outside tax preparation companies or their software.

Like the feds, state officials prefer that taxpayers file electronically. The IRS has estimated that e-filed returns cost less to process—about $3.50 less per return. More than 80 percent of federal returns were filed electronically in 2012.

California is the only state that has a free online tool that generates the return itself; you don't even have to enter the numbers. The program ReadyReturn pulls the information from wage reports and past tax returns and then completes a return online. The state touts ReadyReturn as an easy program that allows taxpayers to finish state tax returns in minutes, rather than hours.

But not many Californians are using it. Of the 2 million taxpayers who were eligible to use ReadyReturn, just 89,000 used the program last year, according to the state Franchise Tax Board. Some 244,000 Californians used CalFile, the state's other online tax program, which requires that taxpayers enter their own information, the board said. In a nutshell, ReadyReturn is for filers with under about $250,000 in income and CalFile is for wealthier taxpayers.

ReadyReturn is not without controversy. It started out as a pilot in 2005, but faced opposition from the industry, particularly Intuit, producer of TurboTax. In a recent investigation, ProPublica reported that Intuit has opposed efforts at the federal and state levels to make return-free filing easier. The company spent more than $3 million on overall lobbying and political campaigns in California, including fighting ReadyReturn. 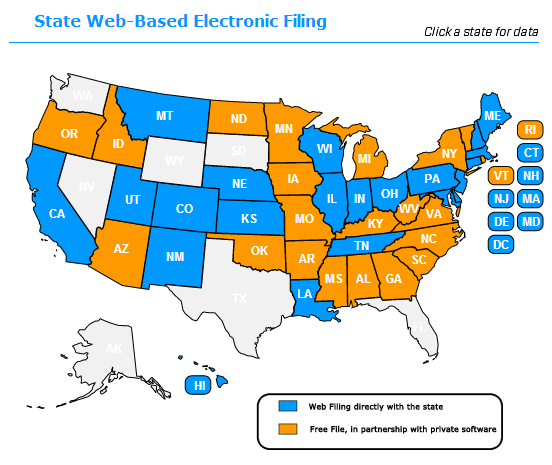 Intuit said it supports the FreeFile Program, the partnership between the IRS and several online tax programs, including its TurboTax.  “Why spend money the government doesn't have when every American can get free online tax preparation and e-filing right now at no cost to consumers or the government?” the company said in a statement in response to the ProPublica story.

A case in point is Massachusetts. Just 3 percent of taxpayers in Massachusetts used the state's free program in 2012, The Boston Globe reported, suggesting many taxpayers are either unaware of the free software or think that commercial versions are easier to use.

New York is the only state that has a law barring tax preparation companies like H&R Block and TurboTax from charging extra to file state income tax returns electronically. But even here, taxpayers get tripped up and find they end up paying if they don't go through the New York website. This happened to New York Daily News columnist Bill Hammond when he used TurboTax for his daughter's return. He was told: “TurboTax Online has always charged a tax preparation fee — not an e-filing fee — to prepare and file federal and state returns. E-filing is included for free.”

New York state is none too pleased. “It's clearly a consumer issue that we are looking into,” Geoffrey Gloak, a spokesman for the New York Department of Taxation and Finance said.