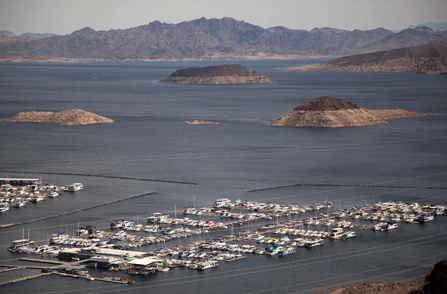 A bathtub ring is seen on islands that dot the background behind Lake Mead Marina in Las Vegas. The man-made lake, fed by the Colorado, provides about 90 percent of Southern Nevada's water. But climate change is causing levels to drop, prompting officials to look elsewhere for water, such as the Snake Valley aquifer below Nevada's border with Utah. That has fueled tension between the states. (AP)

Utah has sent a message to Nevada: What flows into Utah stays in Utah, even if Las Vegas is thirsty.

Four years after the states crafted a landmark pact to divvy up more than 43 billion gallons of water beneath their shared border, Utah Gov. Gary Herbert said last week he would not sign it, dealing a setback to the desert metropolis that has long eyed the resources.

The decision nixes a pact that was a decade in the making, creating uncertainty over how the states will share the supply. It could lead to the country's next drawn out, costly water war. Or, perhaps, a massive sale of Utah's excess water rights along the Colorado River.

“Anyone who says they know what's happening next is exaggerating,” said Daniel McCool, a University of Utah water rights expert and author of “River Republic: The Fall and Rise of America's Rivers.”

But one thing is certain: The agreement's apparent demise provides a window into the West's complicated water politics, which are growing more so as climate change and rapid development further strain scarce supplies.

In 2004, Congress required Utah and Nevada to reach a compromise before transferring any water in the 120-mile-long Snake Valley, an area of mountains, canyons and rolling foothills straddling the states' borders that is home to Great Basin National Park.

The states produced a plan by 2009, splitting the rights down the middle. Utah had already appropriated about 18 billion gallons, more than four times what Nevada had. Under the agreement, Nevada would have received another 12 billion gallons per year, with Utah getting 2 billion more.

Nevada quickly signed. But Herbert, a Republican, long put off his decision amid legal challenges and further study.

The pact would allow Nevada to send Snake Valley water to Las Vegas through a proposed pipeline that could also include straws to nearby communities.

Some 90 percent of Southern Nevada's water comes from Lake Mead, the Hoover Dam reservoir fed by the Colorado River. Studies have shown, however, the supply is shrinking by as much as 7 percent each year, exacerbated by recent severe drought.

The Southern Nevada Water Authority has called the pipeline a safety net, only to be built if Lake Mead becomes dangerously low, which some water experts say could happen within a decade. But questions have arisen about whether the authority could finance the multi-billion project.

In Utah and parts of Nevada, the pipeline prospect has proved unpopular, spurring loud protests from a variety of groups, including environmentalists, Native American tribes, farmers and ranchers who worry the project would damage the communities and threaten their way of life.

“The project would create a massive dustbowl,” said Zach Frankel, executive director of the Utah Rivers Council, which has opposed the pipeline and the pact.

The ultimate fear is that Snake Valley would face the same fate as California's Owens Lake, which catastrophically dried up nearly a century ago when officials diverted its water source — the Owens River— to feed booming Los Angeles. Today, though some flow has returned, the vast salty area northeast of Los Angeles remains the largest single source of dust pollution in the U.S.

Last October, a trio of water attorneys advised Herbert that the agreement was the preferred option to a lengthy legal battle.

“The agreements, while not perfect, provide a framework to protect the interests of water users and citizens as a whole in each state and provide a process to address adverse impacts early on if detected to avoid significant harm to anyone,” the report said.

But on Wednesday, after visiting locals who would be impacted by a water transfer, Herbert announced he would not sign.

“There is no more complex and emotional issue with which I have grappled as governor of this great state,” he said. “I won't impose a solution on those most impacted that they themselves cannot support.”

Now, it's Nevada's move, but it's unclear what it will do.

The Southern Nevada Water Authority said it was disappointed in Herbert's decision. “In the coming days and weeks, we will evaluate our options to address this unprecedented action,” it said in a statement.

Nevada governor Brian Sandoval's office referred questions to the state's Division of Environmental Protection, which did not answer messages.

McCool, the water expert, said Las Vegas' water crisis, along with the political and financial challenges of proposed projects to meet its needs, could spur Utah to sell some of its unallocated rights along the Colorado to Nevada. Or, further in the future, perhaps all seven states will rework the 91-year-old Colorado River Compact to give Nevada a bigger share.

Under the compact, Nevada only receives 4 percent of the allocations. That's because no one in 1922 anticipated some 2 million people would eventually make their lives in the desert.

“The straw that breaks the camel's back is going to be Las Vegas,” said McCool, who dubs this period in western water history “the big shakeout.”

“This is where we'll figure out who has the political will and connections to get this thing done.”