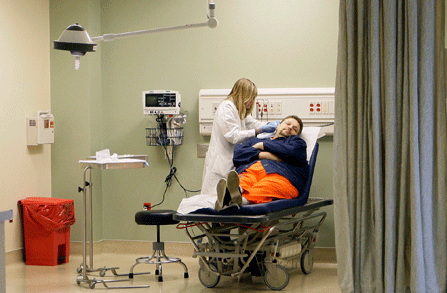 Inmates get health care while they're in prison, such as this prisoner at San Quentin. Starting in January, ex-convicts will be eligible for health care provided through Medicaid. (AP)

Newly freed prisoners traditionally walk away from the penitentiary with a bus ticket and a few dollars in their pockets. Starting in January, many of the 650,000 inmates released from prison each year will be eligible for something else: health care by way of Medicaid, thanks to the Affordable Care Act.

A sizeable portion of the nearly 5 million ex-offenders who are on parole or probation at any given time will also be covered.

The expansion of Medicaid, a key provision of the health care reform law, is the main vehicle for delivering health insurance to former prisoners.

Researchers and those who advocate on behalf of ex-convicts hail the change as monumental, saying it will help address the generally poor health of ex-offenders, reduce medical costs and possibly keep them from sliding back into crime.

“It potentially revolutionizes the criminal justice system and health system,” said Faye Taxman, a health services criminologist at George Mason University. “We now have a golden opportunity to develop and implement quality interventions to both improve health outcomes for this population and also reduce the rate of criminal activity.”

Medicaid is the federal-state health insurance partnership for the poor. Under federal law, states must provide Medicaid to children, pregnant women and disabled adults who fall below certain income thresholds. The states are not now required to extend Medicaid to adults under 65 who are not pregnant or disabled. A small minority of states does so; most states do not.

Since most recently released prisoners are not pregnant or disabled, the vast majority of them do not have Medicaid or health insurance of any kind. As a result, studies show, many do not receive treatment for chronic conditions or continue on medications prescribed in prison. They also do not generally see primary care doctors, relying instead on emergency rooms, an expensive way of delivering medical care.

The ACA could change that. Beginning in January, states that agree to the Medicaid expansion will be required to provide Medicaid to all non-elderly low-income adults. For the first time, many of the 5 million ex-offenders on parole or probation will be eligible for the assistance. It applies to those released from either state or federal prisons. The exceptions will be former prisoners living in those states that currently have limited Medicaid eligibility for adults and that ultimately opt out of the Medicaid expansion, a choice accorded the states in the U.S. Supreme Court's ACA ruling last June.

Ex-cons with jobs who make too much money to be eligible for Medicaid could still qualify for federal tax credits to purchase health insurance through the new state exchanges. Under the ACA, like everyone else, they will be required to have health insurance of some kind starting next January.

Although extending benefits to ex-offenders may not be the most popular aspect of the ACA, the expansion to ex-cons is seen as significant because this population is generally in worse health than the overall population. They have higher rates of chronic and infectious disease (in particular, asthma, hypertension, tuberculosis, diabetes, hepatitis and HIV/AIDS), addiction and mental illness. Those ailments and the lack of treatment on the outside contribute to the high mortality rate among former prisoners noted in a 2007 study published in The New England Journal of Medicine.

The study found that in the first two weeks after release, the rate of death among former inmates was more than 12 times greater than the rate for the general public. The leading causes of death for the ex-cons were drug overdose and cardiovascular disease.

Health insurance coverage for ex-prisoners by way of Medicaid should help reduce high mortality, researchers say. Given the high rate of addiction and mental illness among ex-prisoners, another vital law that helps them is the federal Mental Health and Addiction Equity Act, which requires health insurers to provide benefits for mental health and substance treatment that are on par with those they offer for medical and surgical services.

The corrections system is obligated to provide prisoners with health care, both physical and mental. New prisoners usually receive health screenings early in confinement. Although the quality of treatment varies across states, prison affords the best health care for many inmates that they've received in their lives.

Many of the 650,000 prisoners released next year will be eligible for Medicaid. To ensure continuity of care, researchers and advocates are urging states to help these prisoners enroll in Medicaid and link them to health care providers before they walk through the prison gates.

“When people are on their own, the likelihood of them taking that first step is not high,” said Paul Samuels, president of the Legal Action Center, which advocates for those with histories of addiction, HIV/AIDS or criminal records. “Their lives are very disordered. Many don't have an ID, so enrolling in programs can be very difficult.”

New York, Oklahoma, Florida, Illinois and California are among the states that already have pre-release programs aimed at connecting at least some outgoing prisoners with Medicaid. Some states, including New York, are also investigating ways of connecting ex-prisoners with full-service medical homes that coordinate health care services to manage patients' care.

“The states that get out ahead of this, they're going to have fewer people incarcerated and healthier societies,” said Joshua Rich, a professor of medicine and community health at Brown University, who studies the health of ex-offenders.

The Medicaid expansion will apply to prisoners getting out of jails as well as penitentiaries, although the turnover in jails is much faster with fewer pre-release programs. Those getting out of jail may be eligible for Medicaid, but they may have to find their way to it themselves.

Improved health can also afford former prisoners better prospects in the outside world. “Lots of times when people come up on supervised release, part of the conditions for their release is that they find employment,” said Anita Marton, deputy director the Legal Action Center. “We find people who try to engage in job searches but their illnesses prevent them from being able to succeed, whether it's because of untreated addiction, HIV or mental illness.”

Treatment might not only help them land jobs but also keep them from a return trip to prison. Addicts who no longer use drugs no longer need to be involved in illegal activities to finance their habit. Those with mental illness who are taking medication or seeing therapists are less likely to act out in ways that land them back behind bars. Research has shown that health care, particularly in the areas of substance abuse and mental illness, reduces the likelihood of ex-offenders returning to prison.

Researchers and advocacy groups say the benefits of providing health care to ex-felons do not end with the ex-felons themselves. Prisons have high rates of hepatitis C, HIV and tuberculosis. Untreated former prisoners carry those diseases into communities on the outside and spread those infections.

Health treatment could reduce the infection rates in the areas where ex-felons tend to settle. Since prison populations are disproportionately high in African-American and Hispanic populations, the Medicaid expansion to former prisoners could also reduce the health disparities among those groups.

And finally, if former prisoners are linked up with primary care providers or community health centers, they may turn to emergency rooms less for their health care needs, which would contribute to an overall reduction in medical costs.