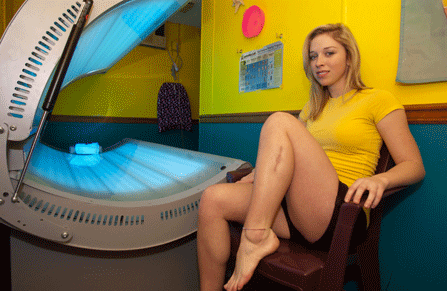 Katie Donnar, pictured at age 18 in 2010, shows the scar from where melanoma was on the calf of her leg, in front of a tanning bed like the one she used in her home and in tanning salons. At least 29 state legislatures are debating youth tanning this session. (AP)

“This is government run amok,” LePage wrote in vetoing a bill that would have made Maine the latest state to institute a ban on indoor tanning for some teenagers, even if they have permission from their parents. “Maine parents can make the right decisions for their families.”

Teens under 18 are banned from tanning beds in California and Vermont. In New York and now in New Jersey, home of the famously tanned cast of MTV's Jersey Shore, the minimum age for tanning beds is 17, regardless of what a teen's parents may say. For Texas teens under 16.5 years-old and Wisconsin teens under 16, the same rule applies. Four additional states ban teens under age 14 from using tanning beds (see map below).

New Jersey Governor Chris Christie, who signed his state's law earlier this week, said the measure there was inspired by the tabloid-sensation “tanning mom,” Patricia Krentcil, who was accused of putting her five-year-old daughter in a tanning bed. Krentcil, of Nutley, N.J., pleaded not guilty to charges of child endangerment and a grand jury chose not to indict her.

Despite LePage's refusal to bar teens from tanning booths, the trend seems to be headed in the opposite direction. California, Vermont and New York all enacted their bans in 2012, and in the current legislative session, lawmakers in 29 states have introduced measures that would tighten restrictions on teen tanning. Some would require parental consent, while others would institute outright bans, according to analysis from the National Conference of State Legislatures.

Legislators are responding to research that directly links indoor tanning to skin cancer. Tanning booths deliver 10 to 15 times the UV radiation of natural sunlight, boosting the user's risk of developing deadly melanoma by at least 75 percent, according to the American Cancer Society.

Teenage girls, the most frequent tanners, are more susceptible to melanoma than other groups, according to the National Cancer Institute. Their research found that melanoma is the most common form of cancer for young adults aged 25 to 29 years.

In response to that same research, tanning beds are also subject to an additional 10 percent tax under the Affordable Care Act. While the tax was put in place to discourage indoor tanning, it hasn't made much of a dent in demand for indoor tanning, according to a study from researchers at Northwestern University Feinberg School of Medicine. But according to the Indoor Tanning Association, it's hurt many small tanning businesses.

“These businesses have paid this unfair tax for the past two years and the results are in: over 3,100 tanning businesses closed; over 35,000 jobs were destroyed,” according to a press release from the Indoor Tanning Association. “Since the tax went into effect, we estimate $145 million has been taken out of the pockets of consumers and main street businesses and remitted to the Federal Government.”

The U.S. Food and Drug Administration, which regulates tanning beds, has not taken a formal position on the issue of teen tanning, but the agency is considering modifying regulations for tanning beds to reduce the amount of UV exposures they emit. The FDA, National Cancer Institute and other health organizations advise avoiding indoor tanning entirely. 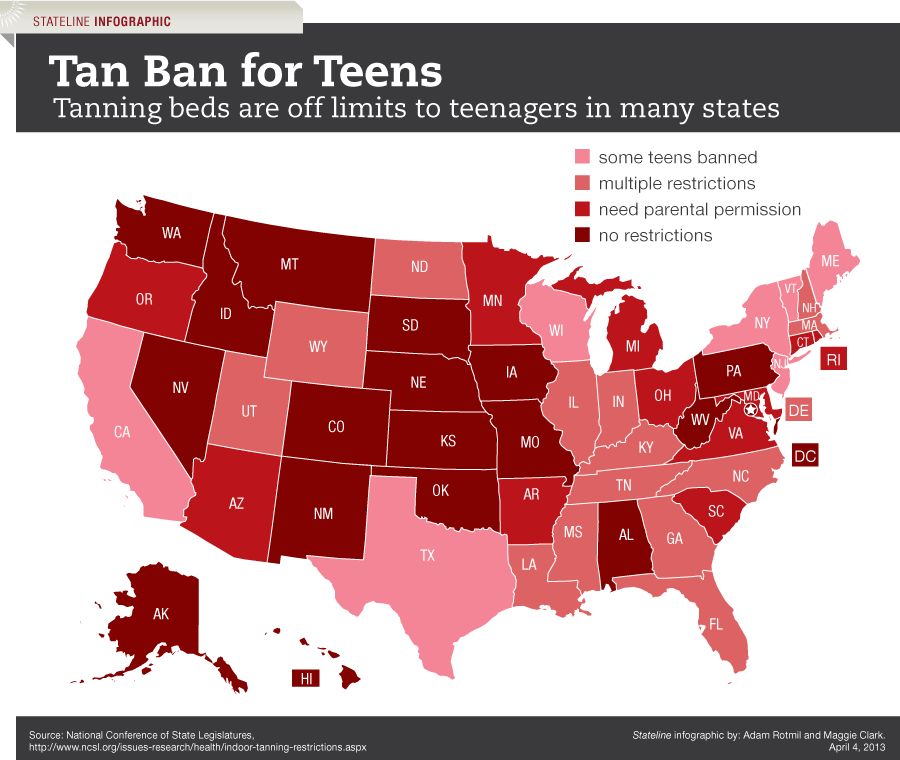 Ex-Felons Are About to Get Health Coverage Should States Get Out of the Booze Business?
RELATED
Topics
Health
Places
United States