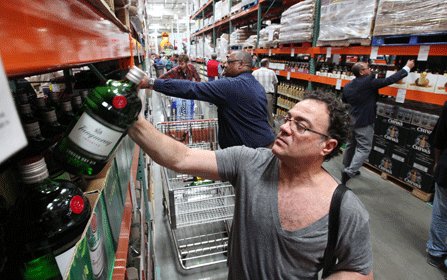 Seattle shoppers peruse a new liquor aisle at Costco in June after retailers began selling spirits for the first time. A voter-approved initiative kicked the state of Washington out of the liquor business and now allows stores larger than 10,000 square feet and some smaller retailers to sell hard alcohol. (AP)

Pennsylvanians love to complain about their state's tangled system for alcohol sales. Consumers can't buy wine at grocery stores and have to go to a state-run store if they want to purchase that or hard liquor. Bars and restaurants are the only outlets authorized to sell six-packs of beer, while beer-specific stores, licensed to sell only by the case or the keg, are the go-to source for variety and volume.

Earlier this month, the Pennsylvania House voted to privatize wholesale and retail liquor sales, bringing the state closer than it's ever been to overhauling a system put in place just after Prohibition. But changing a state's alcohol sales system is never simple.

Seventeen states have an agency charged with overseeing the wholesale or retail sale of liquor or wine, but only Pennsylvania and Utah exert complete control over all such sales. The roster of “control states” (see map below) hadn't changed significantly in decades until last June, when Washington privatized its state-run system, becoming the first state since the 1930s to completely abandon its role in both retail and wholesale liquor sales.

One reason it is difficult to change the status quo is that alcohol sales involve deeply entrenched interests — with even deeper pockets. Liquor stores, grocery stores, bars and alcohol distributors all feel the impact when a state alters its policy. According to the Distilled Spirits Council of the United States, an industry group, the beverage alcohol industry contributes $400 billion to total annual U.S. economic activity, including $90 billion in wages and 3.9 million jobs.

Meanwhile, some advocates complain that debates over privatization often revolve around state revenues and private profits rather than public health and safety. “People have forgotten the primary reasons for regulation and the specific reason for the control system, which was to eliminate the profit motive from the sale of alcohol,” said Pamela Erickson, CEO of Public Action Management and former executive director of the Oregon Liquor Control Commission.

The Community Preventive Services Task Force, an independent body appointed by the director of the U.S. Centers for Disease Control, recommended against further privatization of state liquor operations after a February 2011 review of existing research.

The task force noted that privatization typically results in alcohol being sold on more days for longer hours, a boost in advertising, more outlets selling alcohol and looser enforcement of rules, such as the minimum drinking age. It found “strong evidence that privatization results in increased per capita alcohol consumption, a well-established proxy for excessive consumption and related harms.”

In Pennsylvania, Republican Governor Tom Corbett has made privatization a top policy priority, but it is uncertain how the state Senate will deal with the House-approved privatization measure when it reconvenes April 8.

Few Pennsylvanians love the current system, but most people are so used to it they are afraid of what any changes would do to their bottom line — and their bar tabs. “Any time you try to make a change, other licensees are impacted,” said Republican state Representative Mark Mustio, sponsor of the privatization plan that passed the House. “Because of that, it has always been very difficult even to do anything of a minor nature.”

Mustio said his plan aims for a smooth transition. There are tax breaks and education vouchers to help the 5,000 state store employees who would lose their jobs because of privatization, and the existing beer distributors would be given preference for licenses that would allow them to stock their shelves with liquor and wine. They would be allowed to sell beer in six-packs or even in “growlers,” reusable containers that consumers can bring back and refill.

Mustio said he was strongly influenced by a recent visit to Washington state, where he talked with consumers at retail outlets and met with officials from the Washington State Liquor Control Board. While state stores in Washington had to shut down immediately, Mustio's plan would gradually shutter Pennsylvania's state stores as private sellers get up and running.

Mustio blames higher taxes and fees in Washington state for the rise in average prices that has occurred since privatization there (up $1.60 per liter, according to the Washington Department of Revenue). He said he wants Pennsylvanians to enjoy the convenience, competition and choice he witnessed in Washington.

Still, his bill hasn't earned the support of some key constituencies, notably the union representing state store employees and the Malt Beverage Distributors Association of Pennsylvania. “You go through their laundry list of what they want, and you give it to them,” Mustio said of the Malt Beverage Distributors Association. “But still they're against it. They want to be the only outlet allowed to sell any type of alcohol.”

Mark Tanczos, who heads the Malt Beverage Distributors Association, said the beer distributors he represents already are feeling pressure from new entrants to the marketplace, including grocery stores that have opened up in-house restaurants so that they can sell six-packs of beer to-go. “This change makes our demise even quicker, because how do we compete with these large corporations that have been unfettered for years?” he said.

Even though Mustio's proposal would allow distributors to sell liquor, wine and six-packs of beer — a change they've been asking for since 1937 —Tanczos worries that chain stores and liquor giants from out-of-state would drive them out of business.

In Washington, a variety of outlets have long been allowed to sell beer and wine. Still, a similar battle has been playing out there among large and small retailers. Costco spent about $20 million to promote the November 2011 ballot initiative that privatized hard liquor sales in the state. The initiative allowed smaller retailers to bid for the former state sites that were put up for auction, but allows only retailers with more than 10,000 square feet of space to sell spirits at a new location.

Smaller retailers paid $49,600 to $750,000 in the auction, but many of them have suffered buyer's remorse. “A third of us are already bankrupt or were never able to open,” said David Cho, a board member of the Washington Liquor Store Association. Cho said the liquor store he owns in Tacoma is operating at a loss because of competition from neighboring big-box stores and expensive state fees, including a 17 percent charge on sales to restaurants and bars that he was told wouldn't apply to those sales. “Once the auction happened, they changed the rules,” he said. The Liquor Store Association is lobbying to remove the fee on sales to bars and restaurants.

Cho agrees with privatization advocates that the state shouldn't be in the liquor business, but he wishes Washington had taken a more thoughtful approach. "A free market economy is always a good idea,” he said. “However, it's a state's job to promote competition and to protect small business owners. Eventually in Washington state, you'll only have big-box stores, and the small business owners will be wiped out." 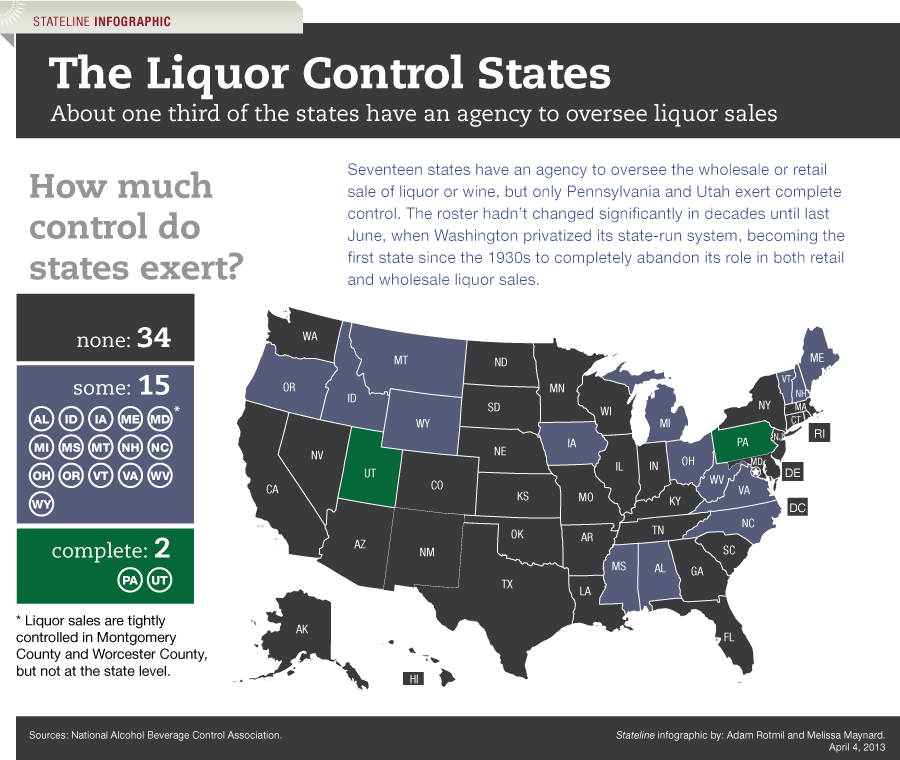