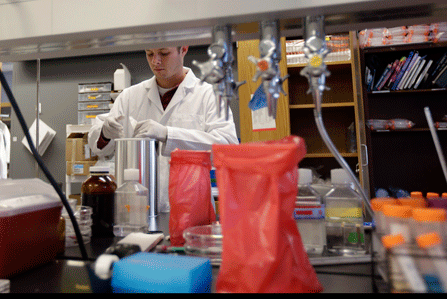 University of Texas graduate student Ryan Stowers works in a biomedical engineering lab on campus in Austin. More than half of the $632 million the university spent on research in 2011 came from federal funding, which is taking a major hit under sequestration. (AP)

Marian Alicea, an engineering student who is slated to graduate from college this spring, needs a doctorate degree to achieve her lofty career goal of becoming a White House environmental adviser with scientific expertise. But the budget battle in Washington is complicating her plans for getting there.

In normal times Alicea, who attends Southern Polytechnic State University in Marietta, Ga., would likely be a shoo-in for a full research stipend. She is an honors student who has snagged several prestigious internships. And as a Latina she belongs to a minority group that is underrepresented among engineers.

But because of the sequester—the automatic federal budget cuts that went into effect March 1—some of the schools that want Alicea can't offer her the financial aid she needs.

Federal agencies pour billions each year into university research, largely through grants that allow student researchers to pay their bills as they work. With less federal money to spend, some Ph.D. programs are delaying admissions decisions, while others have already cut positions amid the uncertainty. 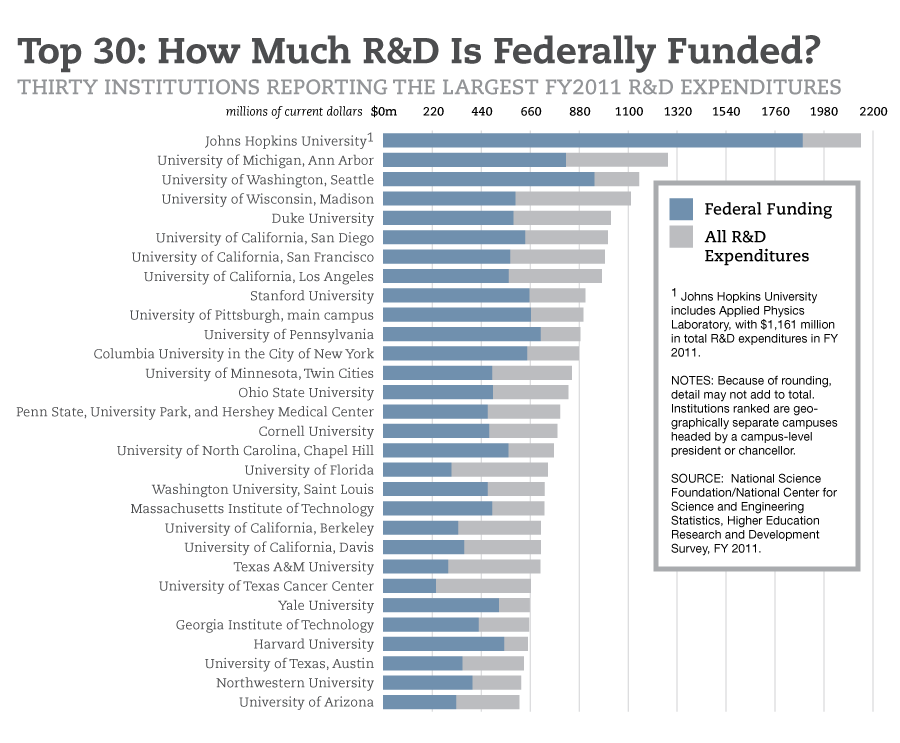 Meanwhile, the National Science Foundation, facing similar cuts, estimates it will give out about 1,000 fewer research grants and awards this year, affecting as many as 3,000 researchers.

Researchers and university officials worry the lost funding will slow or halt research on everything from cancer treatments to contaminated soil and water. They also fear it will dissuade young scholars from pursuing scientific careers.

“It will be profoundly devastating for this generation of students,” said Michael Reid, head of the physiology department at the University of Kentucky's College of Medicine.

Alicea was accepted into four of the dozen programs she applied to, but only two —Virginia Tech and Auburn — offered her financial help. The other universities, Maryland and Illinois, said they could not guarantee her money because the sequester had muddled their budgets.

Enrollment in graduate schools was already lagging amid growing concerns about student debt. Between 2010 and 2011, first-time U.S. enrollment across programs fell by 1.7 percent, following a decade of gains, according to a survey by the Council of Graduate Schools.

“This financial stress on institutions comes at a really tough time,” said Debra Stewart, the council's president. “It has a chilling effect on what was already a chilly situation.”

For all university students, sequestration will mean higher fees on Stafford Loans and reduced payments from some grants, including federal work study. Some educators worry that the prospect of amassing higher debt will scare students away, particularly as institutions hike tuition amid eroding state funding. But the economic forecaster Moody's expects universities as a whole to face only “minimal” immediate effects from sequestration as they turn to other revenues.

For graduate students in the sciences, the impact will be more dramatic.

A lack of federal money prompted the University of Kentucky's College of Medicine to admit about a third fewer students to its Ph.D. program in physiology, according to department head Reid. “There were a number of qualified candidates we had to turn away,” he said.

Reid, who oversees a lab studying how chronic disease, such as cancer, speeds up muscle deterioration, said one of his lead doctoral students will lose his grant if sequestration continues, threatening to halt his education and dramatically slowing down the line of work.

If the politicians in Washington can craft a budget deal that replaces the sequester, Reid's lab could immediately resume some of its stalled research, he said. But when it comes to genetically engineering mice, a process that can take years, it would likely have to start from scratch.

When that type of research is halted, Reid said, “That's it. You're toast.”

Alicea has no qualms about taking the offer from Virginia Tech, but she is frustrated by her constricted choices and troubled by what it says about lawmakers' support for the sciences. Experts consider investment in those areas to be essential for the country's economic competitiveness and ability to improve health and technology.

Consider Lucas Arzola, founder and head of Inserogen, a biotechnology startup that uses tobacco leaves to speed up the development of human and animal vaccines. He originally developed the technology as a Ph.D. student at the University of California-Davis, largely supported by federal grants.

If Congress doesn't act, “how many graduate students will no longer have the support to make that next critical discovery?” Arzola said in a video testimony shortly before sequestration took effect.

Major drug, energy and engineering companies are increasingly relying on universities to build on their research and develop new products, said Robert Duncan, vice chancellor for research at the University of Missouri. Duncan says sequestration “is terrible for U.S. competitiveness,” pointing to a 2010 National Academies of Sciences study that showed the U.S. has begun to lag behind other countries in math and the sciences.

“In spite of the efforts of both those in government and the private sector, the outlook for America to compete for quality jobs has further deteriorated,” the authors concluded. They called for more spending on research and education.

Furthermore, many economists argue it is misguided to curb research spending to address the nation's budget crisis, because several studies have shown such spending spurs economic activity far greater than what is invested.

Last fall, an analysis by the Information Technology and Innovation Foundation, a non-partisan think tank in Washington, estimated cuts to research and development funding under sequestration would reduce GDP by as much as $860 billion over nine years.

“If we want to see our still somewhat lagging economy pick up again, (investing in research) is one of the major ways to achieve it,” said Collins, the NIH head.

At NIH, the cuts follow a decade in which funding stayed static despite inflation, and could result in the elimination of as many as 20,500 U.S. research jobs, according to an analysis by United for Research, a coalition of research institutes and patient advocates.

“It is a paradoxical thing that we are both at a time of remarkable and almost unprecedented scientific opportunity,” Collins said, “and we‘re also at a time in the United States of unprecedented threat to the momentum of scientific progress.”