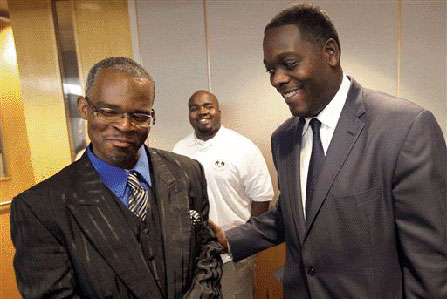 Dallas District Attorney Craig Watkins (right) greets Richard Miles (left), who was found innocent on February 22, 2012 after serving 14 years for a murder he did not commit. Miles was one of the 178 people added to the National Registry of Exonerations in 2012. (AP)

Since 1989, at least 1,089 people convicted of crimes have been officially cleared based on new evidence of their innocence, according to the National Registry of Exonerations annual report released Wednesday (April 3).

That total includes 178 exonerations that researchers at the University of Michigan Law School and Center on Wrongful Convictions at Northwestern University School of Law uncovered in the past year. Sixty-nine of those people were exonerated in 2012, the rest were cleared in earlier years but hadn't been included in the database until now.

The researchers, led by Professor Samuel Gross and veteran journalist Maurice Possley, launched a national registry of exonerations last year. The people included in the report, who come from 45 states and the District of Columbia, were convicted of crimes ranging from murder to tax fraud.

Since 1989, California leads the states with 125 total exonerations, followed by Texas, Illinois and New York. All four states have laws that allow post-conviction evidence testing and encourage police and prosecutors to re-examine cases where a conviction might be in doubt.

Researchers discovered these cases by combing through public records, “scattered in courthouses around the country over three decades,” said Gross in a Twitter Q&A session about the findings of the report.

Gross and Possley attribute the increase to new state laws which facilitate post-conviction evidence testing and the creation of conviction integrity units in the district attorneys' offices in Dallas, Houston, Manhattan, Brooklyn, San Jose, Calif., Chicago and Lake County, Ill., which specialize in reviewing old cases. It also might reflect a growing understanding of wrongful convictions, their causes and the cost of getting convictions wrong, Gross and Possley said.

“If prosecutors and police are more open clearing the names of innocent people, it sends a positive message,” said Gross. “After all, the purpose of law enforcement is to seek truth and pursue justice.”

The vehicle for exoneration also varies. While exonerations using DNA analysis grab headlines, they only made up about one third of all exonerations from 1989 to 2012. Most of the defendants in the database were exonerated because of the belated disclosure of perjury or mistaken witness identification, not DNA analysis. 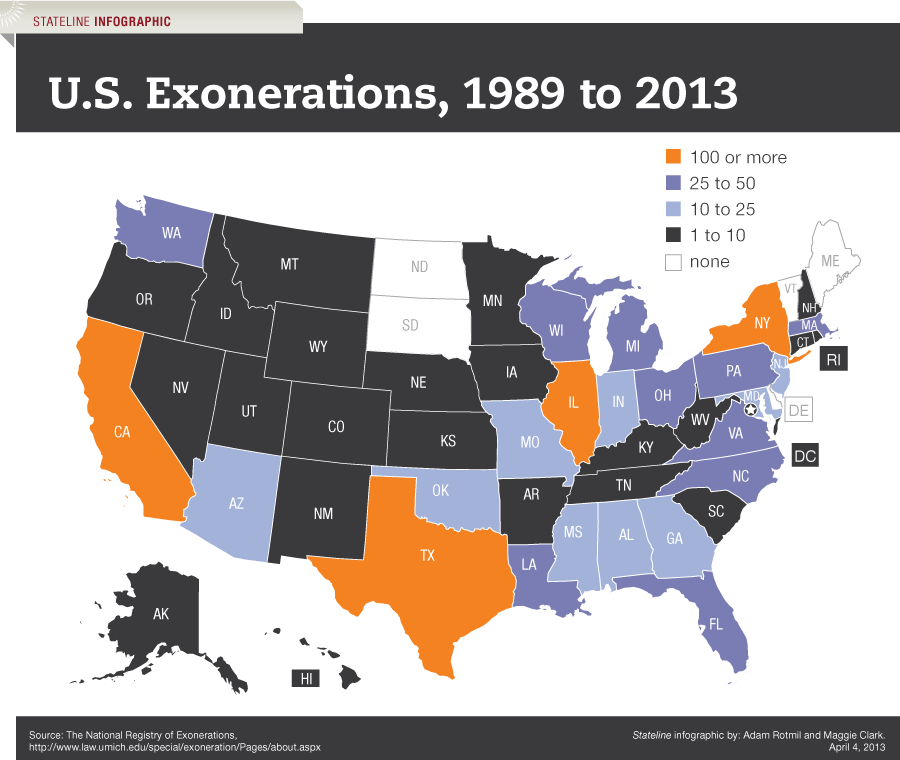