MILLEDGEVILLE, Ga.—State and local drug enforcement partnerships, heavily reliant on federal grants that have been shrinking for years, were teetering on the brink of extinction even before the recent round of automatic spending cuts known as the sequester. Now the latest cuts are threatening to push them over the cliff.

A prime example is the Ocmulgee drug task force based here in this small town of about 17,000. Supported by the Byrne justice assistance grant program, the regional task force budget makes up just one-ten-thousandth of the $448 million that was distributed to all 50 states through the program last year. But the task force is the only law enforcement entity that investigates drug trafficking in the three counties it serves, which are about 90 miles southeast of Atlanta.

Nationwide, the Byrne grants have been cut about 40 percent since 2009. Faced with yet another year of budget reductions and the looming mandatory 5 percent federal cuts, there's not a lot of optimism that the Ocmulgee task force will survive much longer.

For law enforcement agencies all over the country, the federal budget cut put in place under the sequester could spell disaster. Because of partisan gridlock in Washington, these Byrne grants, which states may use to pay for law enforcement, courts, crime prevention programs, corrections and substance abuse treatment, will be cut by at least 5 percent this year and by an additional 5 percent in each of the next nine years. U.S. Attorney General Eric Holder has warned that those cuts may even be deeper to keep federal prisons open and FBI agents on the job.

The diminishing funds could mean that in states that heavily rely on task forces, such as Georgia, Montana, Missouri, Iowa and California, known drug traffickers will walk free.

The Ocmulgee task force has just four officers who work about 30 cases at any one time. They routinely seize crack cocaine, methamphetamine and stolen guns from street-level drug dealers and well-connected drug traffickers throughout central Georgia.

These traffickers carry drugs from stash houses in Atlanta and get their merchandise from all over the world. Recently, a wiretap investigation that began based on information from the streets of Milledgeville led investigators to a cocaine trafficking ring run by a Mexican drug cartel.

“This isn't just a group of local officers just driving around arresting people for buying $10 of dope outside the Dairy Queen,” said Baldwin County Sheriff Bill Massee, who has loaned two of his deputies to work full time for the task force.

States were originally encouraged by the U.S. Department of Justice to set up these multijurisdictional drug task forces in the 1980s to stem the crack cocaine epidemic, which crossed city and county borders and necessitated more collaboration between agencies. The partnerships were especially popular in rural states, where a local county sheriff might only have one or two deputies to patrol hundreds of miles. 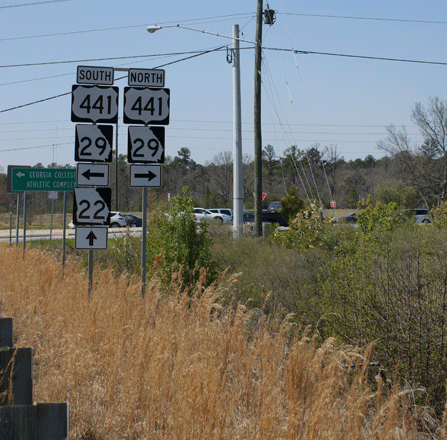 Georgia has long been a major drug distribution point with Atlanta at its hub. The city sits at the intersection of three major interstate highways, making it easy to funnel drugs south to Florida and north to South Carolina. Atlanta investigators have uncovered connections to cocaine and methamphetamine traffickers in Mexico. And prescription drug abuse has gained a foothold in Georgia, thanks to an influx of unscrupulous doctors fleeing Florida's crackdown on pain management clinics, a key source of fraudulent prescriptions.

Georgia still heavily depends on its 19 drug task forces, despite the declining federal support. Except for the one-time infusion of cash the state received from the economic stimulus specifically to buy equipment, the state's Byrne grants are down about 50 percent since 2007.

To the officers patrolling the Ocmulgee region in central Georgia, what's happening with the federal budget really matters. Depending on the severity of the sequester cuts, which have been decried as “dumb” by President Barack Obama, these law enforcement officers could lose their jobs.

“There's no job security (for officers), no health insurance, no guarantees,” said Mildred Braxley, a veteran drug investigator and analyst with the Ocmulgee task force.

“Small task forces are closing over a funding difference of $10,000,” said Lopez-Howard. “A 5 percent cut to the state's Byrne (justice assistance grant) for this year is $295,000 and our largest task force, which serves west Atlanta, costs about $300,000. So a 5 percent cut is a whole drug task force shut down.”

Other states are facing the same dilemma. In Montana, where the Bakken oil boom has brought a corresponding increase in population and crime, drug cases are up 133 percent in the region, according to state criminal justice data. Local police cannot keep up.

Closing the drug task forces there would result in more property crimes, assaults and domestic violence, Tom Allen, Montana's northwest drug task force commander, wrote in a letter to the state board of crime control.

Already, three Georgia drug task forces have shut down. In southern Georgia, the counties hugging the Florida border between Tallahassee and Jacksonville were forced to disband their joint task force last year. The force had received about $80,000 each year in Byrne grants to pay salaries for investigators. By 2012, that award dwindled to less than $40,000.

“The counties just can't make up the difference,” said Clinch County Sheriff Winston Peterson, “and we had to just close down the task force that had been operating for more than 20 years. People lost their jobs, and we just don't have the tools to fight (drug trafficking) any longer.”

Not everyone is a fan of the task forces, which lack clear oversight in some states. The national ACLU and several members of Congress have accused some of them of racial bias in arrests. In an egregious example of misconduct,  a white drug investigator in Tulia, Texas, lied when he testified that he had sold cocaine to more than 40 black residents during a sting. They were then wrongfully jailed. The ACLU secured pardons from Governor Rick Perry for all the accused.

Since the Tulia scandal, Texas has scaled back its use of drug task forces. U.S. Rep. Shelia Jackson-Lee, who represents urban Houston, reintroduces a bill each year to create an oversight authority for drug task forces and penalize states that allow convictions based on the sole testimony of a task force officer. Colorado has also phased out its use of task forces in favor of community corrections and crime prevention programs.

In Georgia, shifting ideas about how best to spend limited criminal justice dollars has led the state to begin assessing the impact of drug task forces. Pending those outcomes, the state could make a move away from the model.

But for the local police and sheriffs here in Milledgeville, the drug task forces are the only thing keeping their heads above water.

“It'll be three or four months before we know for sure how long we can go on before talking about folding,” said Sheriff Massee. “But before we let it die, we're going to do whatever we have to.”