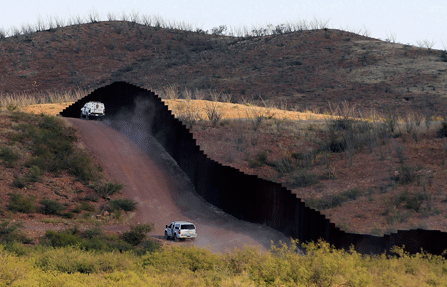 U.S. Border Patrol agents near Naco, Ariz. drive along a fence at the U.S.-Mexican border designed to keep out illegal immigrants. An Arizona state senator says a plan for the state to build its own border fence will be unveiled in a few weeks. (AP Photo/Ross D. Franklin)

After nearly two years of preparation, an Arizona state senator says a plan will be unveiled in a few weeks to build a fence along the border with Mexico to keep out illegal immigrants.

The idea is to plug the gaps that Smith and other Arizona officials see with the federal government's border fence along the state's 370-mile border with Mexico. Private donors have given $275,000 for the effort, most of it in the first few months the fund was set up.

Since then, donations have slowed to a trickle, and the money — except what was needed to pay for office supplies and a website — is still sitting in the state treasury.

In the meantime, border security has become a major point of contention in Washington, as Congress works on an overhaul of its immigration laws. Some Republicans want to include a “trigger” that would let immigrants become citizens only after the border is declared secure.

Four of the U.S. senators in the so-called Gang of Eight that is spearheading the chamber's immigration rewrite visited Arizona's border with Mexico last week. While in Nogales, Ariz., they saw a migrant scale the 18-foot federal border fence.

“Border Patrol successfully apprehended her, but the incident is another reminder that threats to our border security are real,” wrote U.S. Sen. John McCain, a Republican from Arizona, on Twitter.

In the state legislature, Smith says he has used the two years since the state border fence law passed to develop plans. Contractors and manufacturers have offered to donate materials and services to the effort; one defense contractor helped out by surveying the border for eight days, Smith said.

There are several logistical challenges, including figuring out how to build a fence without the help of the federal government. The U.S. government controls everything within 60 feet of the border, which means anything the state builds would have to be set back that far.

The federal Bureau of Land Management also owns several pieces of property, which together account for about 44 miles of land along Arizona's 370-mile southern border. But BLM spokesman Dennis Godfrey said the state has not yet requested any cooperation. “At this point, it is just an academic question,” he said.

Smith said the state has identified state and private land where it has permission to build the new structure, particularly in the eastern part of the state. Once the first portion of the fence is built, the state can kick off more aggressive fundraising efforts. “Once we prove the system works, we can take that story to the American public,” Smith said.

Smith declined to say which agency is doing the legal review or what questions it is addressing. He said the Legislature's Joint Border Security Advisory Committee will likely get a proposal “in the next several weeks.”