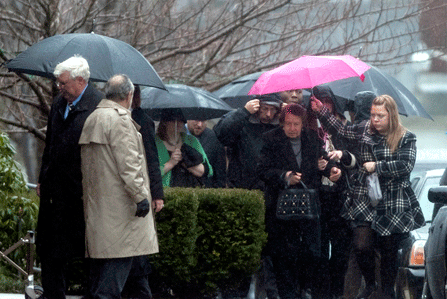 The massacre of 20 children and seven adults in Newtown, Conn., has prompted much of the legislation in at least 23 states on gun ownership and the mentally ill. (AP)

Little noticed in the tough gun control measures that New York Gov. Andrew Cuomo drove through the General Assembly was a provision containing the most expansive language in the United States for keeping gun ownership from people with mental illness.

Most states have laws that remove ownership rights from those a court has involuntarily committed to a psychiatric hospital. But the New York law makes a court determination unnecessary.

Instead, it requires mental health professionals to tell local officials if they believe a patient is likely to hurt himself or herself or someone else. Police officials would then be authorized to seize guns that person might own. The name of the patient would also be entered into state and national registries to prevent future firearm purchases.

“People who have mental health issues should not have guns,” Cuomo said upon passage of the bill in January. “They could hurt themselves. They could hurt other people.”

Many blanched at Cuomo's comments even as states across the country struggle to achieve a balance between public safety and the rights of the mentally ill on this issue. To many, Cuomo seemed to suggest that anyone with a mental illness — a broad swath that includes depression, eating disorders, personality disorders and schizophrenia — is dangerous even though studies have shown that those with mental illness are only slightly more likely to commit acts of violence than anyone else. Research shows that they are more likely to be victims of violence.

In addition, some states, such as Colorado, are considering legislation to make it easier to involuntarily commit people, which, in turn, would made it easier to rescind their gun ownership rights.

Worse, they fear that this law and similar measures around the country could cause some who suffer from mental illness to withhold essential information from their providers or avoid treatment altogether for fear of being reported to the government. And it's lack of treatment that increases the possibility of violence, they say.

“We want people to seek help when they need it,” said Ron Honberg national director for policy and legal affairs with the National Alliance on Mental Illness. “The last thing we want to do is pass a law that ensures that someone who voluntarily seeks help is going to be put on a registry maintained by the FBI and state police.”

Cuomo's office referred questions to the Office of Mental Health, which did not respond to requests for comment.

Not everyone in the mental health community opposes the New York law. D.J. Jaffe, executive director of MentalHealthPolicy.org recently wrote in The New York Times, “(T)he overriding concern must be keeping the patient they are currently seeing alive and those around them safe — not some hypothetical future client. The far greater risk is to know someone has a serious mental illness, believe they are dangerous — despite their being under your treatment — and do nothing about it.”

The flurry of legislation was prompted by disclosures, some sketchy, that Newtown shooter  Adam Lanza, like gunmen before him in Aurora, Colo., Tucson and at Virginia Tech, suffered from mental illness  In Lanza's case, the “mental illness” reported was Asperger's Syndrome, a developmental disorder resembling autism.

Whether legislation under consideration would have prevented all or any of the tragedies is far from certain. Some believe that politicians have simply made the political calculation that targeting mental illness is safer than antagonizing the National Rifle Association.

“To the extent that we believe we are making ourselves vastly safer, I think we are fooling ourselves,” said Paul Appelbaum, director of the Division of Law, Ethics, and Psychiatry at the Columbia University College of Physicians & Surgeons.

“The general concern that I have is that in the wake of horrific events like Virginia Tech and Newtown,” Appelbaum said, “there's been a concerted effort by the NRA to distract attention from questions of the availability of guns and particularly those with high capacity, and instead to point the finger at the mentally ill because it's always easier to do that.”

While opposed to virtually every other legislation regarding gun control, the NRA does support legislation to keep guns from those judged to be a danger to themselves or others, found not guilty in a criminal case by reason of insanity or committed involuntary to in-patient or out-patient treatment.

“We have a mental health system in this country that has completely and totally collapsed,” NRA chief Wayne LaPierre said on NBC's “Meet the Press". “We have no national database of these lunatics.”

Patient advocates say it's also far easier to target the mentally ill than to restore the $4.5 billion in state funding the public mental health system has cut over the last four years, which has vastly reduced access for tens of thousands of needy people with mental health issues.

Federal law prohibits the sale of guns to anyone who has been “adjudicated as a mental defective or has been committed to any mental institution.” States are supposed to report these people to the federal database of those prohibited from gun purchases, the National Instant Criminal Background Check System (NICS).

But compliance is spotty. According to the group Mayors Against Gun Violence, 23 states plus the District of Columbia had submitted fewer than 100 mental health records to NICS as of November 2011. Some states, such as Vermont, Mississippi and Tennessee, have legislative proposals this year to ensure better reporting.

Many states have adopted legislation that hews closely to the federal language regarding gun ownership and mental illness, although without the phrase “mental defective,” which mental health advocates find deeply offensive.

State laws pertaining to gun ownership and mental illness generally piggyback on state statutes governing involuntary commitments to psychiatric facilities or to out-patient treatment. When seeking to commit someone, most states rely on a determination by a court, based on expert psychiatric testimony, that a person is either at high risk for self-harm or for hurting someone else.

Most states rescind patients' rights to gun ownership if they have been involuntarily committed. But some states, including Georgia and Mississippi, restrict gun rights not only to those involuntary committed, but also to those who have voluntarily committed themselves. A few states have laws that allow restoring gun ownership rights after some specified period of time has elapsed after commitment has ended.

But the standard states use for commitment — dangerousness — is considered by many to be suspect. “Our ability for predicting future behavior, violence and suicidality, is highly imperfect,” Columbia's Appelbaum said.

“I understand the desire that is voiced so widely now for someone to figure out who's going to commit acts of violence and to do something to prevent them,” he said. “But the fact is any strategy that relies on the identification of dangerous people as opposed to restricting access to the means of violence is both inherently flawed and not likely to be successful.”

Studies show that the mentally ill as a group are only slightly more likely to commit acts of violence than anyone else in the population, particularly if the person is also abusing alcohol and illicit drugs, has an untreated psychosis, or has a history of violence.

Overall, the mentally ill are responsible for no more than 5 percent of violent crime (and much of it doesn't involve firearms). Rather than focusing on the mentally ill, says Honberg, of the National Alliance on Mental Illness, legislators should look to remove guns from people who have already shown a predilection for violence, for instance, those convicted of domestic abuse or other violent incidents.

But others, such as Joshua Sharfstein, Maryland secretary of Health and Mental Hygiene, insist that it is possible to balance public safety and the rights of the mentally ill. Maryland Gov. Martin O'Malley has proposed a package of gun control legislation, including a measure that would deprive gun ownership from those who have been committed for any amount of time. The law now says only after a commitment of 30 days or more.

“I think we're trying to help the legislature craft a law that focuses on the area of greatest risk without going overboard by creating real disincentives to seeking care,” Sharfstein said.

Which is exactly what critics say the New York law will do. The measure was considered, passed and signed into law in 24 hours. “We weren't involved at all,” said Don Capone, executive director of the New York Chapter of NAMI. “Right after the tragedy in Connecticut, the governor decided he wanted to address gun-control issues. He got together with the legislature and the whole thing was enacted with very little debate.”

The law requires psychiatrists, psychologists and other mental health professionals to report a patient they deemed dangerous, even if that provider believes that the patient would respond well to treatment and have no reason to believe the patient owns a gun.

“This is a massive invasion of privacy for very likely little gain,” Capone said.