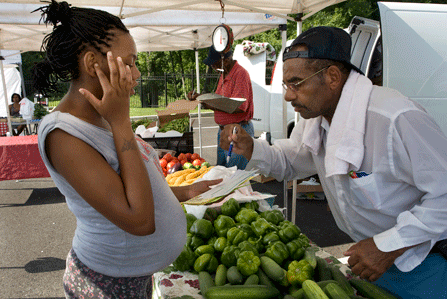 WIC helped an expectant mother to buy food in Washington, DC, in 2012. The March 2013 sequester has cast doubt on the continued funding of programs including WIC. (Getty)

An effort to keep the federal government open also could deliver relief to pregnant women, mothers and young children in need of food.

The U.S. Senate passed a plan Wednesday (March 20) that would soften the blow of the so-called sequester on the Women, Infants and Children (WIC) program. The WIC money is part of a stopgap spending bill the Senate sent to the U.S. House to prevent the government from shutting down when the current federal spending plan expires on March 27. House leaders have indicated that the lower chamber would sign off on the Senate plan.

The Senate's budget writers restored enough money to WIC so that it would be cut by only 2 percent this year, rather than the 5 percent — or $333 million —  cut called for under the sequester.

The automatic spending cuts under the sequester, which took effect three weeks ago, are designed to cut about $85 billion from federal spending in the remainder of the federal fiscal year, which ends in October. About half of that total will come from a 5 percent across-the-board cut in discretionary domestic spending, while the other half will come from an 8 percent cut in defense spending.

The federal government pays for WIC, but states administer the program, which serves pregnant women, infants and children under the age of 5. It provides recipients with food, nutrition consulting and health care referrals.

The Obama administration says up to 600,000 people could lose WIC benefits if Congress does not block the automatic cuts under the sequester. But the exact number of people affected depends on how states respond to the cuts. The sooner states act, the fewer people will likely lose benefits.

To stretch their money further, states might put new applicants on a waiting list or even cull less needy recipients from the rolls to make sure those in greatest need would get food and nutrition counseling.

But it would take months before the full effects were felt, because recipients often receive food packages to last them three months, Greenaway said.

Congress has fully funded WIC since 1997, according to the Center for Budget and Policy Priorities, a group that backs policies that benefit low- and middle-income Americans.

Advocates worry cuts would discourage people from applying, even if they would still be covered.

“You can't make surgical cuts like that,” said Laurie True, executive director of the California WIC Association. “If word gets out on the street, people stop coming in, the caseload tanks. It's really damaging. It takes us years to get our caseload up if word gets out that the program is cutting.”

Officials who work with WIC say states likely would be able to handle a 2 percent drop in funding without denying benefits to anybody. The birth rate is declining, meaning there are fewer babies and new mothers to serve. Even among those who are eligible, fewer are using the program. That could be because the economy is improving or because potential recipients were discouraged from applying by talk of funding cuts, Greenaway said.