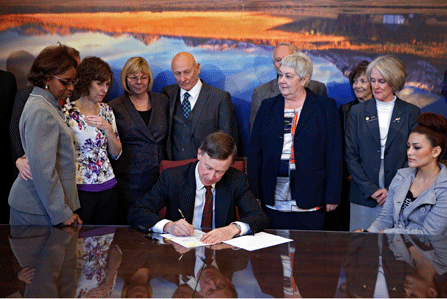 Hickenlooper signed the bills eight months to the day after12 people were killed in a shooting at a suburban Denver movie theater, and just hours after the state's head of the Department of Corrections was shot dead in his home. “It's a solemn occasion,” said Democratic state Rep. Lois Court, referring to the shooting death of Department of Corrections Director Tom Clements.

The mass shooting in Aurora, Colorado, last summer set off a national debate about gun violence and marked a turning point in Hickenlooper's thinking on gun control. Days after the shooting, the Democrat questioned whether tougher gun legislation would have prevented accused shooter James Holmes from bringing an assault rifle, a shotgun and two Glock pistols into a packed movie theater.

But Hickenlooper said he changed his mind after looking at research showing that 30 percent to 40 percent of the fatal shootings of police officers involve guns with high-capacity magazines. He also has noted that 80 percent of Coloradoans support universal background checks and that 61 percent of them support magazine limits.

Hickenlooper made no comments today, but the audience applauded after he signed each of the bills. For the signing of the magazine-limit bill, the relatives of victims killed by guns with high-capacity magazines joined the lawmakers surrounding Hickenlooper at his desk. Some of the relatives spoke to the governor before he signed the measure.

Sandy Phillips, whose daughter Jessica Ghawi was killed in the movie theater, reminded Hickenlooper that Wednesday marked eight months since the shooting.

“You've given us a real gift today,” Phillips said. Phillips also said to Hickenlooper later, “Thank you so much, you're leading the entire country.”

The National Rifle Association and gun rights groups mounted fierce opposition to the new laws. One group, the Rocky Mountain Gun Owners, offered their supporters the chance to win an FNP-40 semiautomatic handgun if they would call the governor's office asking him to veto the bills.  Gun rights advocates have been camped out at the Capitol since the start of the legislative session in January.

No state except for New York has passed as many bills limiting guns and ammunition as Colorado has this legislative session. At least 979 bills relating to guns, both tightening and loosening rules on guns and ammunition, have been proposed in states since January 1, 2013, according to CQ State Track, a legislative bill-tracking service. These bills run the gamut from requiring gun owners to buy liability insurance to making it a crime to enforce federal gun laws that are potentially stricter than state laws.

In response to the shootings at Sandy Hook Elementary School in Newtown, Connecticut last December, federal lawmakers also have proposed background checks for all gun sales. That bill is pending in the U.S. Senate. But state lawmakers in majority Republican states have eschewed new gun restrictions in favor of other measures they say will enhance school safety. As Stateline has previously reported, South Dakota recently enacted a law allowing schools to designate a teacher or other school official as an armed “sentinel” to protect students and teachers from violent intruders.