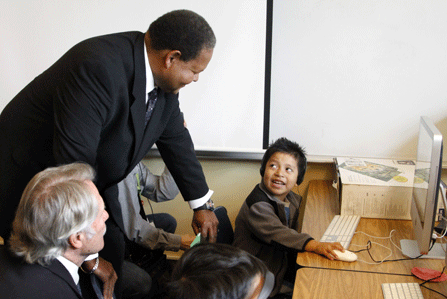 Salem, Ore. -- To improve this state's abysmal dropout rate, Gov. John Kitzhaber wants to make sure students haven't already fallen behind before they even enter a classroom.

Under Kitzhaber's education overhaul, which he launched in 2011, every Oregon student will have to meet academic milestones—kindergarten readiness and reading by the third grade, for example—on the road from preschool to college. To reinforce this unified approach, Kitzhaber pushed to abolish Oregon's K-12 schools superintendent, an elected position, and appointed former New York City and Miami schools chief Rudy Crew as Oregon's chief education officer.

Crew is charged with overseeing every stage of education, from preschool to college, with the goal of boosting Oregon's 68 percent graduation rate—fourth worst in the country—and increasing the number of Oregonians with an associate or bachelor's degree.

Kitzhaber leads Oregon's new Education Investment Board (OEIB), which he conceived to better connect decision makers at all levels of education, making him one of only two governors to sit on a statewide education panel (Alabama is the other), according to David Kysilko of the National Association of State Boards of Education.

This year Kitzhaber aims to go even further. Under his budget proposal, the Department of Education, which currently oversees K-12 schools, would add preschool to its responsibilities. The agency would funnel money to community-based “hubs” – which could be organized by local government officials, education providers or a non-profit organization – that would then distribute it among local preschools, nurseries and child-care providers. And he has proposed creating a new Department of Post-Secondary Education to oversee public universities, community colleges and student aid.

But the goal goes beyond fewer departments.

“This is not consolidation for consolidation's sake,” said Ben Cannon, Kitzhaber's education adviser. “It's about having much deeper levels of coordination and connection in this work.”

Kitzhaber's ambitious goal is to boost Oregon's high school graduation rate to 100 percent by 2025. He wants 40 percent of Oregon adults to have a bachelor's degree, and another 40 percent to obtain an associate degree. It's 30 percent and 18 percent, respectively, now.

He concedes it will be tough to reach those standards, but he is convinced his plan is better poised to succeed than past efforts because it has clear long-term goals, aligns those goals with school performance, and taps the resources of the local community.

“You make this a proposition about the whole community, about everybody,” he said. “We have these huge aspirations and you can't just assume that this is all going to happen in the school building.”

At a recent meeting of the Education Investment Board, for example, Kitzhaber and his colleagues discussed a proposal to require schools and colleges to partner with local politicians, non-profit organizations and the business community.

But some question whether the changes are happening too quickly and can outlive the governor's time in office. Even Kitzhaber concedes that the state will have to spend more on education for the plan to work. Nevertheless, there's a strong sense of enthusiasm in Salem about the changes.

“I think we're in a new era in education in Oregon,” said state Sen. Mark Hass, the Democratic chair of the education and workforce development committee. “And I do have to credit the governor with that.”

Oregon is part of a small but growing number of states trying to improve academic results by better aligning different parts of its education system. In New York, the state's education board and top education official have overseen all levels of education, from preschool through college, for more than a century. That's the case for K-12 education and higher education in Pennsylvania as well.

Last year, Rhode Island lawmakers merged the state's K-12 and higher education boards to better connect education policies in the hope of driving up college-bound rates.  And former Washington Gov. Chris Gregoire called for similar changes to those undertaken in Oregon in an editorial she wrote one month before leaving.

“[We] need to create a seamless, accountable system focused on students and their success,” the Democrat wrote. “We must break down our educational silos.”

Kitzhaber emphasizes that his goal is not to centralize all education decision-making in the state. He embraces what he calls a “tight-loose” model to govern the state's relationship with education providers. All schools and colleges, for example, enter into achievement compacts with the OEIB. The board sets a series of academic milestones, such as graduation rates and student academic progress, that schools need to meet but gives schools the freedom to achieve those goals however they see fit. He hopes that schools will continue to provide feedback to the state on what elements of the plan are working, and which need to be readjusted.

“What we think works and what actually works may be two different things,” he said.

Waiting for a Stick

Schools are still figuring out exactly what those compacts mean for them. It's unclear, for example, what the consequences will be for schools that miss their targets. While the state plans to eventually move to outcomes-based funding, where schools are funded based on how well they meet academic targets, an OEIB report to the legislature in December 2011 said that districts won't lose funding for not meeting their compact goals. The state could intervene in the districts of low-performing schools, though, and take more “direction” over a district's budget.

The compacts are designed to spur conversation in schools about how to improve academic performance, but so far schools have been modest, at best, in their targets. After many K-12 districts submitted plans for flat or even negative growth in their first compacts last year, Crew required one-third of them to resubmit higher goals. Many districts said that the initial, lower goals were partly a function of having to submit compacts before they knew about academic performance for the previous year.

“The relationship between when you have your data and when you set your targets is funky,” said Carole Smith, superintendent of the Portland Public Schools

While Crew characterized the initial back-and-forth on raising compact targets as a “rattling of swords,” he said the compacts will ultimately lead to a different relationship between the state and schools, which have become accustomed to the punitive measures associated with missing targets for the federal No Child Left Behind law.

“There are going to be people who are used to the rules of old, in which they are waiting for a stick,” Crew said. “I'm suggesting that there can be an institutional relationship among committed people where you operate off of commitment as opposed to control.”

The process of setting achievement compacts, and discussing what milestones are most appropriate, represents a “real dialogue about transformation,” he said.

“This really stretches beyond the question of ‘who failed?' to the realm of ‘who will now be responsible?'” he said.

But the success of that transformation is limited by financial constraints.

The state's spending on K-12 education earned it an F in the most recent ranking of state education systems by Education Week and has led to growing class sizes, while it's among the bottom five states in higher education funding per student according to a recent report by the State Higher Education Executive Officers.

Many attribute Oregon's financial woes in education to the passage of Measure 5 in 1990, which cut local property taxes, that had helped pay for education, and shifted most of the burden for funding schools onto the state, which has an income tax but no state sales tax.

Kitzhaber wants to change Oregon's tax system and hopes that his changes to Medicaid and public safety will free up more money in the budget for education.

Until then, even supporters of Kitzhaber's education plans say there's a limit to what the state can accomplish.

“Are educators and parents dedicated to helping students? Yes” said Hanna Vaandering, vice president of the Oregon Education Association and a member of the OEIB. “But can you get 100 percent results with 65 percent funding? I don't believe you can.”

Congress May Reverse Some of Sequester's Cuts to WIC Kansas or Indiana? Not in Basketball, but Population
RELATED
Topics
Education
Places
Oregon