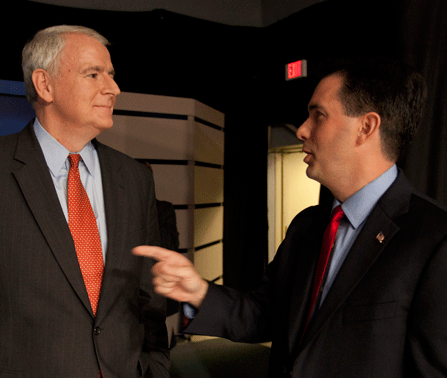 Milwaukee Mayor Tom Barrett (left) and Wisconsin Governor Scott Walker campaigned against each other in the 2010 gubernatorial election and a 2012 recall. Now, they're embroiled in a heated debate over whether cities and school districts should be able to require employees to live where they work. (AP)

Milwaukee Mayor Tom Barrett and Wisconsin Gov. Scott Walker are locked in a heated debate over whether cities and school districts should be able to require employees to live in the jurisdictions where they work.

Walker, a Republican, tucked a provision into his budget proposal that would prevent Wisconsin cities and school districts from imposing residency requirements on their employees. He argues it is an issue of personal freedom and individual choice, and that the residency requirement for Milwaukee teachers dissuades talented applicants from applying.

Barrett, a Democrat, said the state should stay out of Milwaukee's affairs, and has called Walker's proposal “the very definition of big brother government.” He has publicly fretted about a potential exodus from Milwaukee of middle-class public employees –and a corresponding loss in tax revenue.

He used the Michigan legislature's 1999 elimination of residency requirements as a cautionary tale in an interview with the local Business Journal. “Eleven years ago the city of Detroit lifted the residency requirement for police officers and today, 53 percent of officers live outside of the city,” he said. “If we want the tax base of Milwaukee to resemble the tax base of Detroit, this is the way to go.”

Scott fired back in an interview with the Milwaukee Journal Sentinel. “It's a weak argument, or an argument of weakness,” he said. “It's saying the only way we can keep people here is to build a wall.”

Residency requirements in big cities are not as common as they used to be. “It can be pitched as a free choice issue, but on the other hand the whole purpose of residency requirements is to give public employees a real stake in the cities they serve, and of course to capture the revenues that they've generated,” said Peter Eisinger, a professor for The New School for Management and Urban Policy in New York who has studied residency requirements.

Philadelphia police several years ago negotiated a contract provision that allows them to live outside the city after five years on the job. Minnesota repealed the Minneapolis residency requirement in 1999, and Missouri lifted residency requirements for St. Louis police in 2005 and for firefighters in 2010.

The Ohio legislature passed a measure banning municipal residency requirements in 2006, which the state Supreme Court upheld in 2009. Cleveland's City Council fought back earlier this month with a city ordinance that requires all employees to live in Ohio and all emergency personnel to live within Cuyahoga County or six adjacent counties.

“It's primarily to be prepared,” said Maureen Harper, communications chief for Cleveland Mayor Frank Jackson. “Fortunately in the last several years, the city hasn't faced a major crisis. In the event that we do, we need to make sure that first responders can get on the job quickly.” The ordinance comes on the heels of a series of audits that revealed leave abuses and shift-trading among firefighters, allowing some to live as far away as California for months at a time.

Milwaukee's public safety unions have been pushing for an end to residency requirements for years. David Seager, president of the Milwaukee Professional Firefighters Association, said the requirement is archaic and dates back to an age when transportation options were more limited. He doesn't expect many Milwaukee firefighters to leave the city, where about 75 percent of them own homes, but believes they should have the choice to do so.

Seager also dismisses the idea that public safety personnel should live within city limits so they can respond quickly to an emergency, pointing out that a full staff of 232 firefighters is on duty at all times. “There is not a massive disaster that our on-duty staff cannot mitigate,” he said. “I find it very insulting when people insinuate that we would not be part of the community if we do decide to leave the city.”

Many Detroiters blame the end of the residency requirement for accelerating the city's decline. Ken Cole, Detroit's lobbyist in Lansing, pointed out that candidates for public jobs know when they apply that they will have to live in the community where they'll work. “It is the height of hypocrisy that many of the employees fast forward and now say ‘I have no choice where I live,'” Cole said.

A year after the state repealed Detroit's residency requirement, the Anderson Economic Group, a consulting firm, estimated the change would reduce the city's annual revenue by $21 million. But Cole said the actual impact has likely been far greater than anticipated.

For example, many of the public employees who have moved out of the city are police officers and firefighters, and their departure has decimated some formerly middle-class neighborhoods, Cole said. “To the degree that that has compromised public safety, it has a snowballing effect that has precipitated the departure of other city residents,” he said. “You feel safer with cops and firefighters in your neighborhood.”