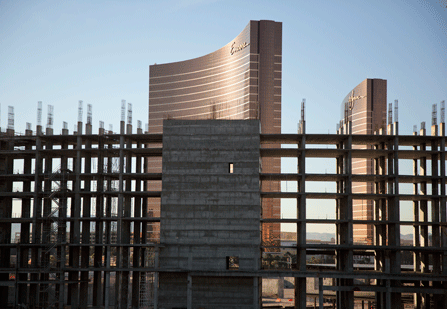 Construction work is on the rise in Las Vegas. (AP)

California and Rhode Island have bumped Nevada from the top jobless spot in the nation with the highest unemployment rates among the states at 9.8 percent each. Nevada dipped to 9.7 percent.

Nevada had been on track to have the country's highest unemployment for three straight years, but in its latest report, BLS revised some of its earlier projections. BLS had earlier reported that Nevada had a 10.2 percent unemployment rate in December 2012, but that figure was tweaked to 9.8 percent.

With the BLS revisions, December 2012 marked the first time since 2008 that all 50 states had single-digit unemployment rates.

Overall, Nevada's unemployment rate has been on a downward path since early 2011 and fell into single digits in December, Bill Anderson, chief economist for Nevada's Department of Employment, Training and Rehabilitation said in a statement.

“Some of the industries which were hardest-hit by the recession, like construction and manufacturing, appear to have stabilized and are on the path to improvement,” Gov. Brian Sandoval said in the same statement.

In total, 24 states reported jobless rates significantly lower than the U.S. figure of 7.9 percent, BLS said, and 17 states and the District of Columbia had rates that were not appreciably different from that of the nation.

Nine states, however, had measurably higher rates. In addition to California, Rhode Island and Nevada, the other states with rates higher than the national average are: New Jersey (9.5 percent), North Carolina (9.5), Mississippi (9.3), Illinois (9.0), Michigan (8.9) and Georgia (8.7)

As Stateline reported in a three-part series, states hit hardest by the collapse of the housing market, such as Florida and Nevada, are slowly bouncing back.

Looking specifically at construction, employment expanded in two-thirds of all states in January as the industry showed signs of emerging from a six-year slump, according to an analysis by the Associated General Contractors of America of the latest BLS figures.