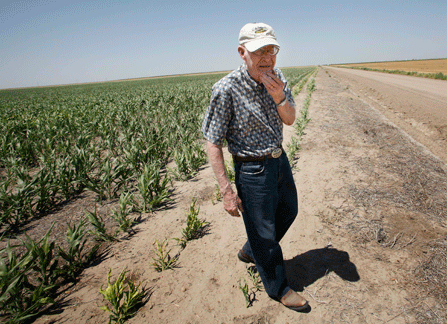 Rodger Funk walks out of a dryland milo field on his farm near Garden City, Kan., that sits atop the Ogallala Aquifer. As groundwater dwindles, officials are encouraging farmers to shift to more resilient, less water-intensive crops, such as sorghum. (AP)

Threatened by another summer of crop-shriveling drought, Kansans are watching a bold experiment unfold in Sheridan County, population 2,556, a sliver of the state's northwest corner. On lands dominated by agriculture, locals have agreed to across-the-board cuts to water use.

The state of Kansas didn't order the cuts, nor did a regional entity. Rather, at a time when states and locals are jockeying for water, stakeholders in the 100 square-mile “high priority” (meaning particularly parched) zone of Northwest Kansas Groundwater District 4 reached a consensus to reduce groundwater pumping by 20 percent over the next five years. They are gambling on short-term wants for a longer-term need — to preserve the aquifer their lives depend upon.

“We're doing it because we think it's right,” said Wayne Bossert, the district's manager. “We have high hopes for it.”

Sheridan's plan is just one of many major efforts to fend off a slow-moving disaster with national implications: The High Plains Aquifer, which feeds some of the world's most productive croplands, is running dry.

The aquifer, also called the Ogallala, is one of the world's largest underground sources of freshwater.  It stretches 174,000 square miles through the middle of the country from South Dakota to Northwest Texas, touching parts of Kansas and five other states, watering more than one-quarter of all irrigated acreage in the U.S. and some of world's largest grain cattle feedlots. The Ogallala also provides drinking water to four of every five people living above it.

Where Water Levels Are Changing 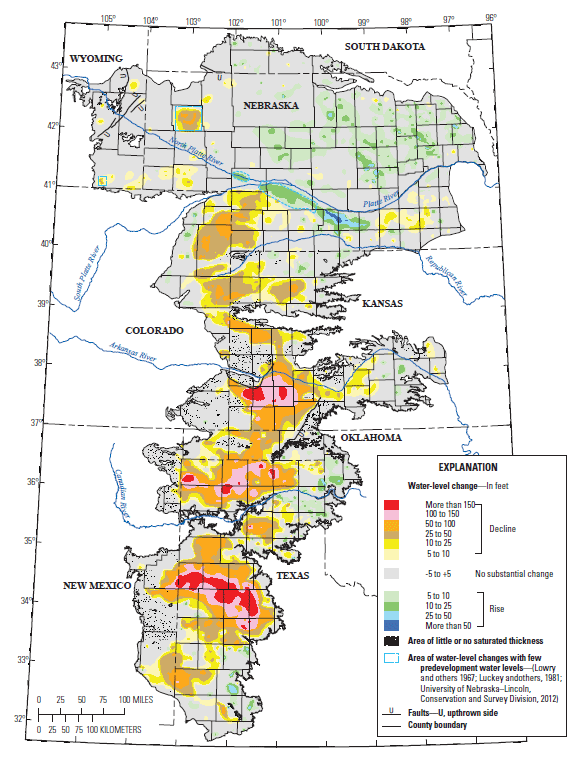 This map gives a geographic snapshot of where and how widespread the impacted places are.

For decades, farmers and others have been slurping up groundwater far faster than nature can recharge it.

Since Americans first began to seriously irrigate the Great Plains, beginning in the 1940s, water levels across most of the Ogallala have fallen at least five feet, according to the U.S. Geological Survey. Almost one-fifth of the area has dropped at least 25 feet, while 11 percent has lost 50 feet or more. In some of the worst-off areas of Kansas and Texas, the water table has declined as much as 200 feet. The most recent drought has compounded the problem, drying up riverbeds and forcing farmers to rely even more heavily on groundwater.

It can take as long as 6,000 years for water to percolate through the thick layers of earth and rock separating surface from aquifer. In most areas, pumping the water is akin to mining iron or copper; once removed from the ground, the resource doesn't come back.

“It's kind of a ticking time bomb, and we kind of know it,” said Kent Askren, a water specialist with the Kansas Farm Bureau. “We're trying to squeeze every ounce of every drop we apply.”

Researchers and officials have been aware of the Ogallala's condition for decades, but the drought gripping the region has put it, and other water issues, into sharp focus.

Groundwater districts are looking for ways to slash water use, and states aim to incentivize and support those decisions.

If the Ogallala dries up? Folks in the region don't mince words. “That would be devastating,” said Nebraska state Sen. Tom Carlson, who has proposed the task force. “We can't let it happen. We won't let it happen.”

“The implications are profound,” said Kansas Gov. Sam Brownback in an interview. “It is time to act.”

Tragedy of the Commons

For more than two decades, that's what Brownback has been trying to do — first as the state's agriculture secretary, where he learned about the problem in the late 1980s, then as a U.S. senator and now as governor in the nation's breadbasket. But conserving such a vast resource is as difficult as it is important, particularly as Brownback looks to expand Kansas' economy, the straightforward goal of any state executive.

But it has been rapid growth — more crops, cattle, industry and people — that has so stressed the Ogallala over the decades. What's more, the expansion of oil and gas drilling throughout the region, spurred by the advent of water-intensive hydraulic fracturing, has brought new challenges. The drilling process, which can use up millions of gallons of chemical-laced water per well, has stirred angst among some farmers. They worry about increased competition and the reality that fracked water can rarely be reused.

Natural resource experts have described the issue as a tragedy, as self-interested water rights holders race to shore up short-term supplies, even if it means eroding the resource in the long term.

The question for policymakers is how to break that cycle. Could states reach across their borders to conserve the shared resource? Not likely, experts say. State water laws differ greatly, complicating such an effort. States have historically worked together to share surface water, setting compacts on rivers such as the Colorado, Republican or Rio Grande (Compact conditions often spark legal feuds, however. Current fights between Nebraska and Kansas, Texas and Oklahoma and Texas and New Mexico have reached or are approaching the U.S. Supreme Court). But groundwater is a different story. It's harder to measure cross-state impacts of withdrawals, so it may not make sense to set regional limits.

On groundwater, “there doesn't seem to be much interest in cooperating,” said Edella Schlager, an expert in natural resource policy at the University of Arizona. “It's really hard.”

That's particularly true around the Ogallala. It's not simply an underground ocean, where sucking up too much water in Wyoming will lower the water table in Texas. It's a geologic formation, with some areas deeper than others, or covered by thicker layers of earth. Though parts of Nebraska are struggling, for instance, its wide and spongy Sandhills region is particularly absorbent, leading to quicker recharge and less dire conditions.

Last year, Brownback pushed several new groundwater policies through the legislature, including amending the state's “use it or lose it” law, which critics said encouraged farmers and others to waste water so they could maintain access to it. He also expanded water-banking markets, allowing water rights holders to sell excess resources — “so it's worth something if you don't use it all up,” Brownback said.

Brownback's most promising effort, experts say, was creating a new way for locals to decide their water future.  The policy, enacted last year, allows districts to create what are called local enhanced management areas (LEMAs) that would hash out conservation goals — and the means to achieve them — all at the grassroots level.

The Ogallala's future may ultimately come down to the collective actions of a checkerboard of tiny jurisdictions like Sheridan, the guinea pig in Brownback's policy.

“You're only limited by your imagination,” Bossert, the district manager in northwest Kansas, said of the policy. In the past, the state was more intimately involved in those plans. Now, it approves or denies a plan, but can only suggest, but not require, any tweaks.

Some compare the system to one in Texas, which encourages districts to set concrete targets for how much water they want to leave in the aquifer in the coming decades. Once the goals are set, the state uses a matrix to show districts how to achieve those goals and may chip in other help.

In Kansas, the state's biggest role is providing that help, Brownback said, by providing new technology and expertise. That includes pushing farmers to shift toward high value crops that use less water such as milo, also known as sorghum. The governor said he is talking to Israel about importing more efficient irrigation systems.

Bossert said his district has already benefited. “Once someone takes that leap of faith, and crafts that new, shiny thing, you're going to get all sorts of help,” he said.

But Sheridan's task hasn't been easy. Though its plan was approved just months after the LEMA bill passed, the area had spent years debating how to reduce water use. And the wider district still has a long way to go. Sheridan is just one of six high priority areas in the district. The others, perhaps waiting to see what happens there, don't yet have a plan. Some fear that worse-off areas could run out of groundwater before they've decided how to save it.

That's the case in parts of Texas, as the legislature considers funding its water plan. Gary Walker, a state legislator turned groundwater district manager in northwest Texas, said building more reservoirs would be a wise move. But construction could take years, or even decades — time those living above Texas' slice of the Ogallala may not have, forcing farmers to abandon irrigation altogether.

“The aquifer” he said, “limits itself.”