At least 10 states are considering raising their minimum wages even as President Obama's proposal to increase the federal standard is stuck in Washington's political quagmire. In one of those states, New Jersey, voters rather than legislators will decide the issue. A measure that will be on the ballot this fall would increase the state's minimum wage by $1, to $8.25.

The New Jersey measure also would take politicians out of future hourly wage increases by including automatic annual adjustments for inflation, known as "indexing."

Obama endorsed indexing when he pressed for a $9 federal minimum wage in his State of the Union address:  “Here's an idea that Governor Romney and I actually agreed on last year—let's tie the minimum wage to the cost of living, so that it finally becomes a wage you can live on.”

If New Jersey voters approve the measure on the ballot there, the state would become the 11th with annual automatic increases to the minimum wage indexed to inflation: Arizona, Colorado, Florida, Missouri, Montana, Nevada, Ohio, Oregon, Vermont and Washington already index. In all of them except Vermont, voters approved the measure with the automatic hike at the polls. 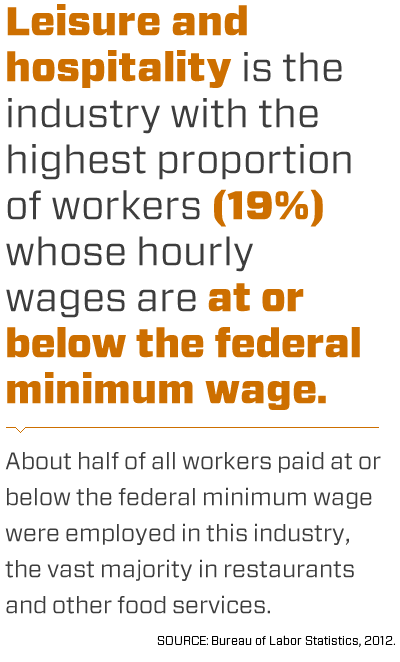 Minimum wage laws generally apply to all employees in the private and public sector, although employees covered by union contracts tend to get higher rates than the state and federal minimum levels require. Some 120 cities have enacted “living wages” that require businesses that receive city contracts to pay more, ranging from $9 to $16 an hour. Maryland is the only state that has enacted a statewide living wage that requires certain state contractors pay wages between $9.39 and $12.49 an hour.

Politically Divisive but Popular Among Voters

Nineteen states  and the District of Columbia already mandate an hourly wage higher than the current federal $7.25 rate, including populous states such as California, Florida and Ohio. The states with the highest minimum wages are Washington and Oregon, which have wage floors of $9.19 and $8.95, respectively.

The federal minimum wage is the law in states that either have a lower minimum or none at all. But states are free to set higher floors than the federal government.

The first federal minimum wage was part of the Fair Labor Standards Act, which President Franklin Roosevelt signed in 1938. The law set a 25-cent-per-hour wage floor and a 44-hour workweek ceiling for most employees. Except for Social Security, Roosevelt said, the law was "the most far-sighted program for the benefit of workers ever adopted."

In recent decades, proposed increases in the federal minimum wage have been politically divisive. But minimum wage hikes at the state level have been popular among voters: Since 1998, proposed increases have been on statewide ballots 10 times in nine states, and all of them were successful. In those elections the ballot measures won an average of 65 percent of the vote, according to the Ballot Initiative Strategy Center, a progressive Washington, D.C., group that advocated for the hikes.

In a February poll of New Jersey voters conducted by Quinnipiac University, 76 percent of respondents supported raising the minimum wage, including 55 percent of Republicans.

New Jersey voters will take up the issue during an election in which all 120 legislative seats and the governor's office will be up for grabs. The current governor, Republican Chris Christie, in January vetoed a bill that would have increased the minimum wage to $8.50. Instead, Christie called for boosting the minimum wage by $1 over three years and giving a 25 percent increase to the state's Earned Income Tax Credit.

Meanwhile, the Democratic governors of Hawaii, Illinois and New York all called for a higher minimum wage in their State of the State addresses this year, although none specifically endorsed indexing.

Obama and other proponents of a higher federal minimum wage say that while companies are making record profits, the lowest-paid workers have seen their purchasing power plummet because the federal wage floor hasn't kept pace with inflation. If it had, the hourly rate would be $10.59.

As supporters in New Mexico point out, the average cost of a gallon of milk in that state cost $2.69 in 2009, the last time the federal rate went up.  Now it's $3.50.  Gas was $2.51 a gallon in 2009, and now it's $3.52. Putting more money into the pockets of working families will boost local economies by allowing these workers to spend more.

“Families are relying on low-wage jobs more than ever. A stronger minimum wage will help restore the consumer spending that powers our economy and that local businesses need in order to grow,” New Jersey Assembly Speaker Sheila Y. Oliver said in a statement. “A robust minimum wage is a key building block of sustainable economic recovery.”

Nevada: If a Nevada employer offers a qualified health plan, the minimum wage is $7.25 an hour.

Leading Democrats in the U.S. House and Senate have introduced legislation that would go even further than the president's plan: It would increase the minimum wage to $10.10 an hour in three steps of 95 cents, and provide for automatic annual increases linked to changes in the cost of living.

But opponents, including Republican House Speaker John Boehner, counter that in a fragile recovery raising the minimum wage would spur employers to let some of their employees go.

“Listen, when people are asking the question ‘Where are the jobs?' why would we want to make it harder for small employers to hire people?” Boehner told reporters in February. “I've got 11 brothers and sisters on every rung of the economic ladder. I know about this issue as much as anybody in this town.”

John Kabateck, executive director of the California affiliate of the National Federation of Independent Businesses, calls increasing the minimum wage is “a feel-good” policy decision that will result in layoffs, higher prices for consumers and fewer opportunities for employees entering the workforce.

A higher minimum wage also disproportionately helps teenagers, not working adults, and does nothing to reduce poverty, says the Employment Policies Institute.  The Washington-based think tank paid for a series of full-page ads designed to combat what it calls the “myths" of the minimum wage.

There is a “large body of economic research on the minimum wage,” David Neumark of the University of California told the Atlantic, “most of which shows that minimum wages reduce employment for the least-skilled workers whom the president's proposal is intended to help.”

The National Restaurant Association has been an outspoken opponent of a minimum wage hike, noting that 46 percent of restaurant workers who make the minimum wage are teenagers. “Policymakers need to focus on expanding payrolls; they should not take steps that hurt employers' ability to hire,” the restaurant group said.

But some prominent businessmen have broken ranks and publicly supported an increase. “We know it's a lot more profitable in the long term to minimize employee turnover and maximize employee productivity, commitment and loyalty,” Costco president Craig Jelinek said last week in a joint statement with other business owners.

Andy Shallal, who owns several restaurants in the Washington, D.C., area, says trade groups are trying to use scare tactics to defeat an increase. “Don't believe it when you hear business will suffer if the minimum wage goes up. It will help our economy grow and thrive,” he said.