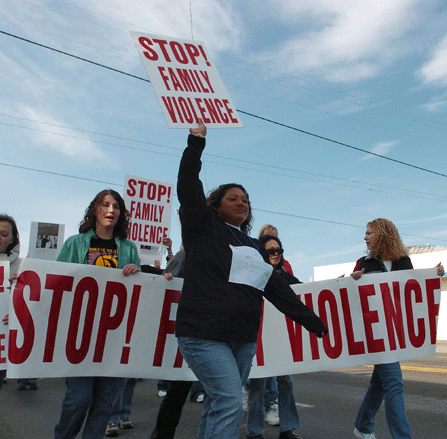 Marchers hold a rally against domestic violence. The Department of Justice announced Wednesday that it will hand out $2.3 million to state and local officials for programs designed to prevent domestic violence homicides. (AP)

The Department of Justice announced Wednesday that it will send $2.3 million to 12 counties and cities in 10 states to bolster efforts to prevent domestic violence homicides, even as Washington remains consumed with budget cutbacks.

Each day, three women and one man are killed by their intimate partners, such as a boyfriend, girlfriend or spouse, according to research from the DOJ.

The new program, called the Domestic Violence Homicide Prevention Demonstration Initiative, is modeled after a successful program in Maryland that trains law enforcement officers and domestic violence hotline workers to ask a series of research-based questions to determine the risk of the victim being killed by their partner. Using the risk assessments, Maryland has reduced its domestic homicide rate by 34 percent over the last five years, according to White House officials.

The $2.3 million grant for the demonstration project comes on top of more than $400 million in DOJ money states received in 2012 under the Violence Against Women Act. That money paid for a wide variety of programs, including sexual violence prevention initiatives on college campuses and transitional housing for victims.

“We know what risk factors put someone in greater danger of being killed by the person they love – and that also means we have the opportunity to step in and try to prevent these murders,” said Biden in a news release.” That's why these grants are so important. They'll help stop violence before it turns deadly.”

Combating domestic violence homicides also aligns with the Obama administration's goal of reducing gun violence. A woman whose partner threatens her with a gun is more than 20 times more likely to be murdered than other abused women, according to research from the National Institute of Justice. And in at least 17 mass shooting incidents—where four or more people were killed— between 2009 and 2013, the shooter killed a current or former spouse or partner, according to analysis of FBI data from the advocacy group Mayors Against Illegal Guns.