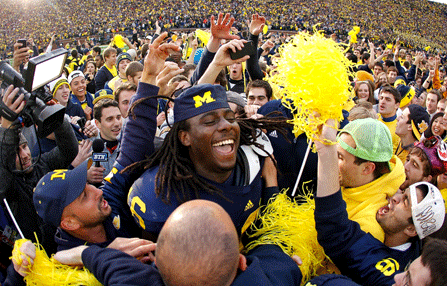 Denard Robinson was one of three potential college recruits asked about their sexual orientation at the NFL national recruitment scouting combine held in February in Indianapolis. (Getty)

Even if the employer is the National Football League, asking about a potential employee's sexual orientation is out of bounds in New York, the state's attorney general warned in a letter dated Thursday (March 14) to NFL Commissioner Roger Goodell.

New York Attorney General Eric Schneiderman was reacting to reports that several NFL teams asked at least three college players at the league's scouting combine last month whether they had girlfriends, were married, or “liked girls.” Schneiderman noted that such questions are illegal in New York, where the NFL offices are located.

Currently, legislators in West Virginia, Nebraska, Louisiana and Utah are debating bills that would bar discrimination based on sexual orientation and gender identity in the workplace, public accommodations and in housing.  Advocates are also pushing President Barack Obama to sign an executive order protecting lesbian, gay, bisexual, and transgender people in the workplace.

Additionally, the outcome of the cases pending at the Supreme Court challenging the Defense of Marriage Act and California's Proposition 8 could affect the landscape for employment discrimination law for federal, state, and local government employees. That will be true especially if the court rules that laws that discriminate on the basis of sexual orientation should receive heightened scrutiny, says Christy Mallory, a law and policy fellow at The Williams Institute, a think tank on sexual orientation and gender identity at UCLA School of Law.

“From the Scouting Combine to the playing fields, everyone deserves equal protection under the law and the right to a fair workplace,” said Schneiderman in a news release. And in the NFL's case, at least 20 of the League's 32 teams are located in states or cities that prohibit employment discrimination based on sexual orientation, Schneiderman said.

Schneiderman has asked NFL officials to schedule a meeting with his office to further discuss the discrimination claims of the three college players, who are Nick Kasa of Colorado, Denard Robinson of Michigan and Le'veon Bell of Michigan State.