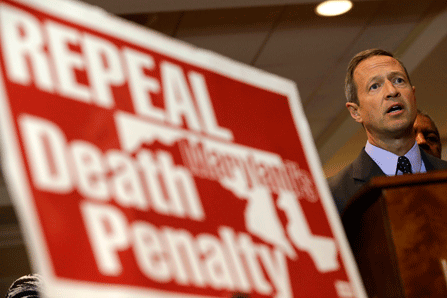 Gov. Martin O'Malley advocates for the repeal of the death penalty. (AP)­

ANNAPOLIS, MD — After a years-long fight, Maryland has become the sixth state in as many years to repeal its death penalty.

Gov. Martin O'Malley, who championed the repeal, says he will sign it into law. The repeal bill makes no provision for the five men sentenced to death, which even after a repeal of the death penalty could legally still be executed, should they exhaust all of their appeals. O'Malley said Friday he will make a case-by-case decision about the five men.

In Maryland, the governor has virtually unlimited power to pardon or commute sentences, and many death penalty opponents have encouraged O'Malley to simply clear death row if he is morally opposed to the death penalty. The Maryland Senate added an amendment to the repeal bill expressing its will that all death row inmates have their sentences commuted to life in prison without parole. The executive clemency decision, however, is solely up to O'Malley.

O'Malley has three clemency options, says spokesperson Raquel Guillory: He can immediately commute all five death sentences, commute each sentence on a case by case basis, or do nothing. He is not expected to make a decision until after the legislative session ends in April.

O'Malley has been notably reluctant to commute any sentences or grant pardons during his seven-year tenure. He's only granted 50 pardons out of 690 requests as of last December, according to The Washington Post. And he's only commuted two sentences, one where an accomplice served three times as long as the shooter, and another where a witness recanted testimony that sent a man to prison for nearly 30 years.

O'Malley's clemency record is in line with his overall stance of being tough on crime, stemming from his background as a Baltimore prosecutor. The majority of governors have broad, nearly unrestricted clemency power to pardon or commute sentences as they see fit. But few exercise that power regularly.

As Stateline has previously reported, governors contemplating higher office—and O'Malley is contemplating a presidential bid in 2016—have been wary of using their executive clemency powers. Well-publicized missteps by Govs. Michael Dukakis of Massachusetts, Mike Huckabee of Arkansas and Tim Pawlenty of Minnesota allowed their opponents to paint them as soft on crime. 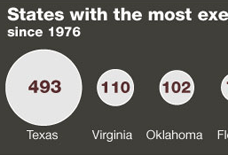 See Stateline Infographic: State of the Death Penalty in 2013

Even though O'Malley's clemency record is less than generous, his support for the repeal of the death penalty has brought him national attention. He's not the only governor who's opposed the death penalty, but he's made it a central part of his political agenda and sold it as a public safety issue, says Shari Silberstein, executive director of Equal Justice USA, which advocates for the abolition of the death penalty.

“I think his actions are symbolic of changing national conversation surrounding the death penalty,” says Silberstein. “It's not the third rail of politics anymore, and politicians aren't going to have to ask themselves if they should take the risk (to oppose the death penalty) because it's not a risk anymore. Politicians are finding that they're not being hurt in polls.”

Nationally, the number of death sentences has continued to trend downward for the last decade. Just 43 people were executed and 77 death sentences were handed down in 2012, according to the Death Penalty Information Center. That's just one more sentence than was issued in 2011, which saw the fewest number of people sentenced to death than in any year since the death penalty was reinstated in 1976.

Legislators in Colorado, Oregon, Kansas and Delaware are currently debating repealing the death penalty, and legislators in Montana gave a hearing to a death penalty repeal bill earlier this session. Colorado Gov. John Hickenlooper, a Democrat, is facing pressure to commute the sentences of two death row inmates nearing execution, and his commitment to the death penalty is wavering.

“From the moment that the governor signed (the repeal) into law, we knew there would be challenges,” says Tyrone Biniarz, a court officer in the Rockville Superior Court in Connecticut who handles death penalty cases.

But Richard Dieter, executive director of the Death Penalty Information Center, believes it is extremely unlikely that Maryland will execute anybody after it abolishes its death penalty.

“There's lots of ways for (death row inmates) not to be executed when the legislature has decided this punishment is not proper,” Dieter says. “It's messy for a time…but it's hard to see that a few years later they'd bring back the execution chamber.”

Conservative legislators opposed to repealing the death penalty want to give voters a chance to preserve it, but so far there is little political momentum for a statewide referendum.