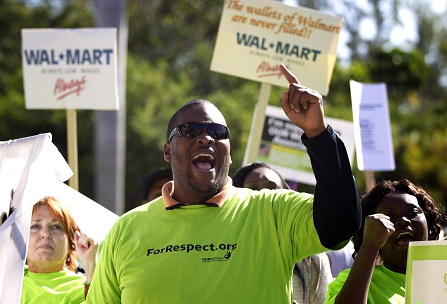 OUR Walmart launched demonstrations and walkouts at hundreds of Walmart stores across the country on Black Friday. The group was among those participating in a conference on “New Models of Worker Representation” at the University of Illinois at Chicago on March 7. (AP)

CHICAGO — In a break from tradition, labor unions this week sat down with community groups to discuss non-union strategies for representing workers.

AFL-CIO President Richard Trumka admitted that even engaging in such a conversation marked a departure from past practice. But Trumka told a University of Illinois at Chicago conference on “New Models of Worker Representation” that the discussion was critically important to the future of the labor movement.

“This subject, new models and ways to represent workers, carries an implicit criticism of the model the labor movement uses today,” he said. “Some people think accepting criticism is a mark of vulnerability, but I'm really not concerned about appearing vulnerable because working people and labor unions have been vulnerable for years. No amount of bluster or head-in-the-sand insistence that everything is fine will change that reality.”

The AFL-CIO is undergoing an intensive 6-month self-examination following high-stakes legislative losses in traditional labor strongholds such as Michigan, Wisconsin and Indiana. In December, Michigan shocked many observers by becoming the 24th state to pass a “right-to-work” law, making it illegal to require payment of union fees as a condition of employment.

The question is whether the labor movement can harness the energy of worker centers and other community groups that provide some of the same services as unions without formally organizing as collective bargaining units. Non-union groups represented at the conference—including Warehouse Workers for Justice, OUR Walmart and the Restaurant Opportunity Center—have successfully negotiated with employers on behalf of workers by leveraging strikes, demonstrations and other actions traditionally associated with organized labor.

“We're seeing people from disparate places in the labor movement coming to some of the same conclusions about what needs to be done here,” says Mark Meinster, campaign director for Warehouse Workers for Justice. “You're seeing some common strategic elements emerge."

“I don't think all of the organizations represented here see unionization as the end goal,” says Emily Twarog, one of the conference's organizers and a labor historian in the University of Illinois Labor Education Program. “But the AFL-CIO realizes that they have to be open to all different ways of organizing.”