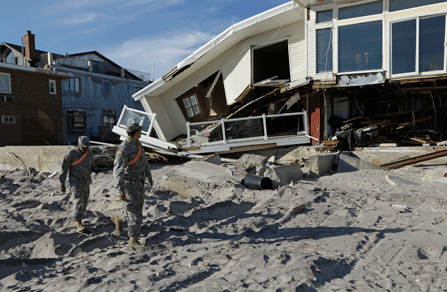 Few U.S. insurance companies are equipped to confront the impact of climate change, a phenomenon stoking severe weather events across the country that have become increasingly costly for the industry, according to a new analysis.

Just 23 out of 184 large companies doing business in the U.S. follow a comprehensive plan to address climate-change risks. Most are foreign-owned and rank among the world's largest firms, says the analysis released Thursday (March 7) by Ceres, a coalition of investors that advocates for sustainable business practices.

Researchers looked at data from a survey administered by insurance regulators in California, New York and Washington — states that require all companies doing business inside those borders and taking in more than $300 million to answer questions about their climate-change strategies. The survey encompassed almost all major insurance companies doing business in the country, because most sell policies in these three large states.

preparedness,” the study said. It did point out, however, that a “small subset” of the industry is changing its business strategies “to remain competitive as the impacts of climate change unfold.”

The analysis comes as weather-related disasters are forcing insurers to pay more claims than ever before. Hurricanes, floods, tornados, droughts and wildfires continue to pummel the U.S. with growing frequency and ferocity, particularly in places with swelling populations. In 2012, the country's warmest year on record, U.S. insurers were on the hook for almost $58 billion in losses, including as much as $25 billion from Superstorm Sandy, according to the Insurance Information Institute.

That reality has prompted advocates for climate policy and a few state regulators to call on industry leaders to update their catastrophe modeling and turn up the volume in their calls for stricter building codes and land-use rules, while pushing for cuts to carbon emissions, the root cause of climate change.

“Climate change could be a game changer for the industry, and we need to make sure we're doing something about it,” Mike Kreidler, Washington's Insurance Commissioner said in a conference call on the report's release.

If the issue is left unaddressed, he said, insurers may have to pull out of risky regions, shifting the burden to struggling publically funded plans or leaving people uncovered altogether, a scenario that has troubled Florida.

Of the companies surveyed, fewer than half said they view climate change as a driver of future losses, despite several studies that have concluded otherwise. Just 39 of the 184 companies said they are motivated to tackle carbon, either through advocacy or investment strategies. Property and casualty insurers were the most active on those issues, Ceres said, though climate change impacts the entire sector.

Jack Ehnes, CEO of the California State Teachers' Retirement System (CalSTRS) and a former insurance regulator in Colorado, said the survey “provides clear, sobering evidence that many in the industry, particularly on the U.S. side, are not giving climate change enough attention.”

That particularly concerns Ehnes, he says, because CalSTRS invests some $3.8 billion of its holdings in insurance companies. The retirement system has recently begun considering companies' long-term climate risks in investment decisions.

Not all insurance experts believe the industry has fallen behind on climate issues.

“Insurers have been protecting people against the risks of climate change since there's been insurance,” Robert Hartwig, executive director of the Insurance Information Institute, told Stateline last month, pointing to the industry's advocacy for more stricter building codes and safer land use.

Hartwig and others say emissions policy falls outside insurers' expertise, and that it would be difficult — if not unworkable — to base risk upon something other than historic trends, which advocates pushing for more action on climate change say are becoming less relevant as weather becomes less predictable.

“Most understand what's going on with climate. If not, they go out of business,” Hartwig says.