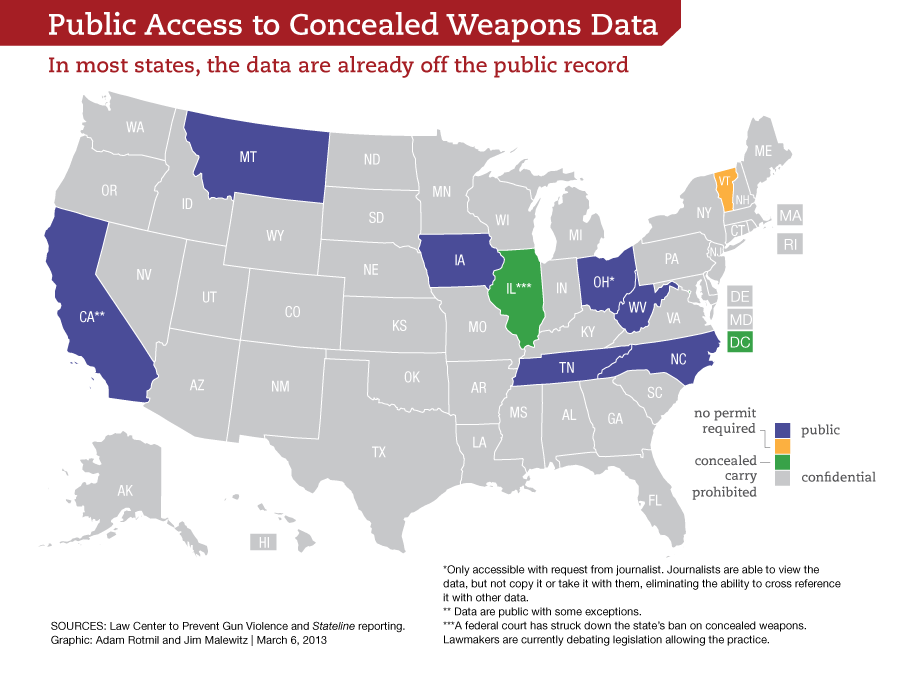 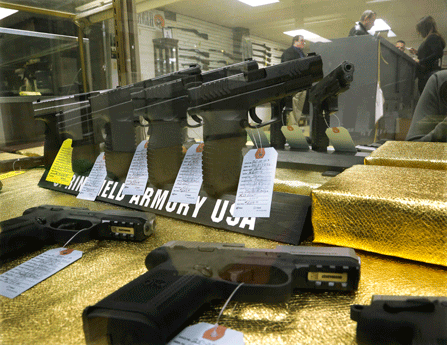 Curious about whether your neighbor is armed? Wondering if local officials are illegally doling out gun permits to convicted felons?  It may be impossible to find out, unless you live in one of a small and shrinking group of states.

Lawmakers in most states sealed such records in past years. (See map.) And this year, many others are rushing to join those ranks, spurred by a suburban New York newspaper's publication of names and addresses of handgun permit holders. Critics said the newspaper infringed on gun owners' privacy and put them in the crosshairs of burglars looking to swipe and swap legally owned weapons.

“Guns, pharmaceuticals and electronics are the primary things burglars are looking for when they rob a house,” says William Lamberth, a Nashville prosecutor-turned Republican state representative who is pushing a bill in Tennessee that would seal personal information about those permitted to carry handguns. “Once the list is out there, there's no way to get it back in the bottle. Technology is the game changer here.”

Four states have blocked public access to gun records in two months since editors at The Journal News drew national attention — and threats of violence — by publishing an online map of permit holders in New York's Westchester and Rockland Counties (the newspaper later removed the names and addresses). Several other states are debating similar measures.

Once the new state laws go into effect, only five states — Iowa, Montana, North Carolina, Tennessee and West Virginia — will give the public unfettered access to information about those who hold concealed carry permits, and similar legislation is pending in most of those states.

California and Ohio provide the data with exceptions. In Ohio, for instance, only a credentialed journalist can request it. In that state a reporter can look at the records but not copy or remove them, making it impossible to cross-reference them with other lists.

The wave of legislation has rankled journalists and other government watchdogs, who say they should be able to scrutinize gun access at a time of heightened concerns about gun violence.

News outlets often cross-reference permitting data with other information, such as a list of felons, to check whether public officials are granting access to people who may be violent. But as lawmakers move to conceal that data, those investigations have become increasingly difficult, if not impossible to complete.

“It just keeps getting worse. Before long, all of these records are going to get shut down,” says David Cuillier, a University of Arizona journalism professor and co-author of “The Art of Access: Strategies for Acquiring Public Records.” “We're all going to lose out in the end. People are going to die because of it.”

“It is a matter of public safety,” says Maine Representative Corey Wilson, a Republican who has authored legislation permanently blocking such requests. “Burglars would have an idea of where the weapons are.”

Gun rights advocates typically argue gun ownership deters crimes. But this situation is different, they say, because burglars would likely break in only when a homeowner is away.

“Burglars are very good at what they do,” says Lamberth.

Lamberth acknowledges there may be good reasons to provide public access to the names of individual gun owners. He says he plans to amend his bill to allow a citizen to check whether a specific felon has received a gun permit in error. “We're allowing for that transparency while protecting this list,” he says. “If you know your neighbor is a felon, you can come in with that name.”

He insists, however, that releasing the information in bulk will put people at risk. Lamberth and Wilson both say women have contacted them to express their fear that making their addresses public would help abusive former partners find them. “If he was intent on coming,” Wilson said, “He'd be coming with a gun.”

Maine's Democrat-led Legislature decided that threat merited emergency legislation that would go into effect immediately, instead of the usual 90 days after passage, temporarily blocking requests as the legislature works on a permanent ban. Maine lawmakers took action after the Bangor Daily News and a person from an anonymous email account requested the information. The newspaper, which later withdrew its request, said it sought the data as part of its long-term reporting on domestic violence, sexual assault and drug abuse and had no plans to publish it as a whole.

But in a state where battles between public officials and the media have been particularly contentious in recent months lawmakers said they didn't trust the newspaper's discretion.

“I have serious concerns that (the Bangor Daily News') request will incite fear among gun owners and non-gun owners alike regarding their safety. There is no reason why these records should be public,” said Governor Paul LePage, a Republican, days before signing the emergency legislation. “If newspapers would like to know who has concealed weapons permits, then they should know the Governor has his.”

Some gun-rights groups have requested the information themselves, in order to fill out their mailing lists. But the leader of one of those groups, Philip VanCleave of the Virginia Citizens Defense League, emphasized that his organization never publicized the names. “We got that list, and we kept it close to our chests,” he says, “We'll gladly give up our access, if they give up theirs.”

Even some journalists questioned The Journal News' publication of the gun records. “People in the news industry are always shedding light on what other people are doing, and they need to be transparent, too,” says Ken Bunting, executive director of the National Freedom of Information Coalition at the University of Missouri. “We should be having discussions about editorial discretion. That is healthy.”

But open government advocates say the legislative backlash has gone too far. "Wholesale closure is not the way to go,” says Cuillier, the University of Arizona journalism professor. “We have to take a scalpel to this — not a hatchet.”

Supporters of greater access note that media outlets have exposed significant problems with local gun permitting over the years.

In 2000, WITI-TV in Milwaukee compared two datasets to show the state had sold deer-gun permits to more than 1,200 convicted felons, people who aren't legally allowed to use or own a firearm.

Three years later, WKMG-TV in Orlando discovered that Florida officials were issuing concealed weapons permits to people who had been involuntarily committed to mental institutions, a group also legally barred from possessing guns.

In 2011, The New York Times investigated five years of permitting data in North Carolina, a state that is now considering legislation that would close access. “More than 2,400 permit holders were convicted of felonies or misdemeanors, excluding traffic-related crimes,” the newspaper reported. “While the figure represents a small percentage of those with permits, more than 200 were convicted of felonies, including at least 10 who committed murder or manslaughter. All but two of the killers used a gun.”

In 2008, the Memphis Commercial-Appeal, which has long angered privacy advocates by maintaining an online database of handgun carrypermit holders, discovered that nine convicted felons in Shelby County had been issued permits by mistake.

And in Nashville, a WSMV-TV investigation found some permit holders in Davidson County had been served protection orders. That's in a state where gun ownership is skyrocketing: The number of handgun permits more than tripled in the past three years.

Past efforts to make the data private in Tennessee have failed, but advocates of such legislation say the controversy over The Journal News investigation has boosted their momentum.

That worries information advocates such as Frank Gibson, who leads the Tennessee Coalition for Open Government. “There has to be some oversight of government, and closing the record removes any possibility of that,” he says.

At least one gun-rights advocate agrees the legislation is a bad idea. Lieutenant Governor Ron Ramsey, a Republican who has gotten stellar marks from the National Rifle Association, told the Associated Press that “having the handgun carry records open actually helps the cause of the Second Amendment, because people can go look at those and realize that they truly are law-abiding citizens.”

“I encourage people like the press to look through these to figure out whether there's something we're missing,” Ramsey said. “When you don't shine light on something, that's when problems are caused.”