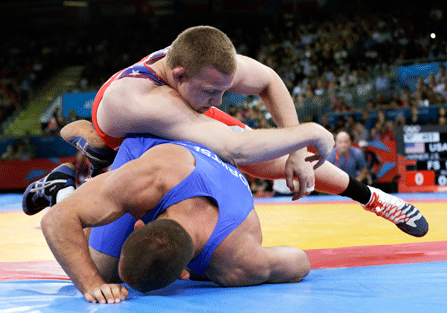 Men wrestle at the 2012 Summer Olympics. Iowa Governor Terry Branstad is leading a group of 33 governors to keep wrestling in the Olympics.­ (AP)

Iowa Governor Terry Branstad is leading a group of 33 governors ­— representing “states with rich wrestling traditions” — in pressing Olympic officials to rethink their initial decision to boot the ancient sport from the 2020 Olympic Games.

In a letter sent to Jacques Rogge, the committee's president, the governors urge the International Olympic Committee to “extend wrestling's long legacy within the Olympic Games.”

“The same spirit of competition that drove ancient wrestlers has transcended generations, and our states are the beneficiaries of this spirit,” the letter said. “Wrestling accelerates character building. At its core, wrestling is an instinct and embodies the human qualities of hard work, discipline, and perseverance.”

Last month, the Olympic Committee's executive board shocked wrestlers worldwide in voting to oust the sport, which has been included throughout the Games' 116-year modern history. The board had reviewed a report analyzing 39 items of criteria, including television ratings, ticket sales, anti-doping policy, and global participation and popularity.

The decision, which is not final, particularly irked lawmakers in Iowa, where wrestling is king. The state's flagship universities have produced at least 10 Olympic gold medalists. Iowa City hosted the most recent Olympic Trials.

Following the vote, Branstad launched an online drive, funded by his campaign committee, to ramp up popular support. As of Tuesday evening an online petition had more than 23,500 signatures.

Olympic officials will hold a final vote in September.