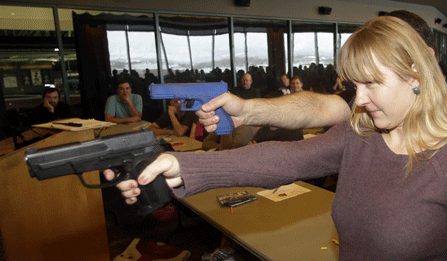 A fourth-grade teacher aims a 40 cal. Sig Sauer during concealed-weapons training for the teachers in West Valley City, Utah. (AP)

In recent weeks, the South Dakota legislature has been rattled over a bill that aims to make schools safer by introducing “school sentinels” — teachers, administrators, security guards or community volunteers who would carry guns to protect their schools.

“If you have not heard about the sentinels bill, it's probably time to come out of hibernation,” state Senator Craig Tieszen joked last week, according to the Argus Leader.

The plan, which school districts could adopt voluntarily, passed both chambers of the legislature, despite protest from the state's school board association and most Democrats, and is headed to Governor Dennis Daugaard.

A month after the tragedy, President Obama called for a mix of gun-control measures and increased security at schools. His plan would ban military-style assault rifles and strengthen background checks, but also would include more money for guidance counselors and school resource officers, who are usually armed and trained to work at schools. He also supported requiring schools to adopt emergency plans and beefing up mental health services to earlier identify students in need of help.

States have pursued a variety of proposals. The day before Obama released his plan, New York Governor Andrew Cuomo signed a new law, which toughens gun laws in schools and requires them to submit school safety plans to a new School Safety Improvement Team. The act also bans assault weapons, puts greater restrictions on ammunition, and requires counselors and therapists to report potentially dangerous patients to mental health officials. In February, Arkansas passed legislation requiring the state to determine whether schools are equipped to respond to acts of violence.

Kathy Christie, who heads legislative research at the Education Commission on the States, says a new trend in school security strategy stresses greater emphasis on training teachers to spot mental health problems in students and refer them for help. “They're looking at what is the first line of defense,” she says.

But the question of beefing up security in schools — particularly allowing teachers and other school staff to be armed — has proved more divisive. Many education leaders criticized the National Rifle Association after it recommended putting an armed guard in every school. After Virginia Governor Bob McDonnell also suggested that the state consider arming teachers, leaders of the country's two largest teachers unions, the National Education Association and the American Federation of Teachers, jointly condemned the idea.

“Guns have no place in our schools.” Dennis van Roekel of the NEA and Randi Weingarten of the AFT said in a joint statement.

In just under a third of the nation's schools, guns do have a place, at least some of the time. According to Department of Education statistics from the 2009-2010 school year, about 28 percent of schools had some armed security staff, with more than 50 percent of middle schools and 60 percent of high schools reporting the presence of armed staff.

Those numbers could increase under the president's proposal, but it could be expensive. Mo Canady, executive director of the National Association of School Resource Officers, estimates that each resource officer costs $50,000 to $80,000, depending on location.

In the early part of the last decade, the federal government helped pay for these officers through its Cops in Schools program, which gave police departments up to $41,666 a year to help hire them. Funding for the program dried up in 2005. Some in Congress have called for it to be renewed, while Obama's plan would give priority to existing Department of Justice grants to police departments hiring school resource officers. Sequestration cuts could affect just how much grant money is available.

To cut costs, some lawmakers are considering retired police officers as potential school security, which Canady says could work if they have the right temperament for a school environment. South Dakota state Representative Scott Craig, who introduced the "school sentinels" bill,  says his plan to arm already employed staff members or volunteers is an even more cost-effective approach for districts and localities, including the small and rural, that aren't wealthy.

“These folks can't afford it,” he says. “They've got one sheriff.”

Craig says law enforcement would approve the sentinels who would receive mandatory training. But while teachers in a few states have flocked to free gun training provided in the wake of the Sandy Hook shooting, some question whether arming teachers actually would make schools safer.

Canady says that armed staff could make things more complicated if police officers were called to a shooting at a school. “In Wild West terms, how would we know who are the good guys and who are the bad guys?” he says.

Francisco Negrón, General Counsel for the National School Board Association, says it could also open up schools to liability in the case of an accident. “A teacher has qualified immunity in performing his or her duties,” he says, “but are his or her duties to carry a gun?”

The South Dakota bill has had more success so far than measures in at least 20 other states that would allow some school employees to be armed, according to the National Conference of State Legislatures. A Virginia bill introduced shortly after McDonnell's suggestion never made it out of committee before the end of session. Similar bills in Tennessee, California and Alaska are also stalled. Some districts have even gone in the opposite direction, with schools in Denver recently reducing the role of police in schools.

Even if states add security and develop better safety measures, Canady says there is always a limit to what they can accomplish. He says the safety protocol followed in Sandy Hook, where many teachers locked their classroom doors and moved students away from them, is in line with the best practices.

“When you have a madman with that kind of weapon, it's hard to defend unless you've got a properly trained and armed professional on the other side,” he says. “You can't have police officers everywhere.”