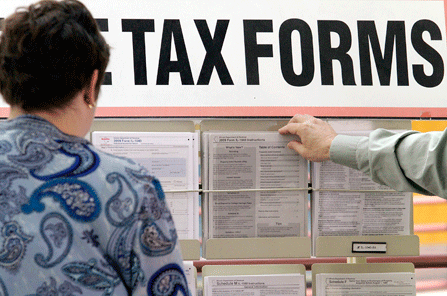 Revenue Rollercoaster Isn't Over for the States

Eye-popping Wall Street bonuses are back. Yet New York still is not collecting as much tax revenue from the financial sector as it did before the recession. When the good times rolled, one in every five state tax dollars came from Wall Street.

Like a bad hangover that won't go away, some states are still suffering from the effects of the recession that technically ended three and half years ago.

To be sure, most state budgets are finally in the black again, and the 50 states collectively are expected to bring in as much this year as they did in the peak year before the recession. That prediction, which comes from experts at both the National Conference of State Legislatures (PDF) and the National Association of State Budget Officers (PDF) , assumes that Washington's belt-tightening isn't too severe.

But state by state, the recovery has been uneven:  Nearly half the states are expected to collect less tax revenue this year than they did before the recession.

In states such as North Dakota and Nebraska, tax revenues remained robust even during the recession because of boom times in energy and commodities. But states such as Nevada and Rhode Island are still struggling with double-digit unemployment and tight budgets.

Revenues Lag Most In Nine States

These nine states saw double-digit declines in tax revenue in fiscal 2012, compared to their peak year before the recession

Source: The Nelson A. Rockefeller Institute of Government.

Nine states ended fiscal 2012 with tax collections that were anywhere between 10 percent and 20 percent lower than their high point before the recession, according to the latest figures (PDF) from the Nelson A. Rockefeller Institute of Government. Topping the list are Arizona and Louisiana, each with revenues a whopping 21 percent below their peak years.

Tax cuts and the impact of the housing slump explain Arizona's drop, which NCSL projects will not return to peak levels until 2018. Factors beyond the recession explain Louisiana's predicament: Energy prices have been up and down, and cuts in sales and income taxes permanently reduced the tax base. The state has yet to fully recover from the 2005 Hurricanes Katrina and Rita. The recession suspended much of the massive rebuilding efforts there.

“Everyone is focusing on Hurricane Sandy, but we're still living with Hurricane Katrina here,” says Greg Albrecht, chief economist of the state's Legislative Fiscal Office who says the state will be remain below its peak revenues for some time. “We're still processing FEMA paperwork” from Katrina, he says.

Volatility of energy pricing is largely the reason for the dips in revenue for Alaska, New Mexico and Wyoming.

Alaska, for instance, has no state income or sales tax, and 90 percent or more of its revenue comes from oil taxes and royalties, which hit a high in 2008 when oil prices reached $140 a barrel, explains David Teal, director of the Alaska Legislature's legislative finance division. He says it's not unusual to have hundred-million dollar swings because of oil prices. “(Fiscal 2008) was an anomaly and the revenue decline has nothing to do with the recession and does not reflect Alaska's economic situation,” he says.

The recession that essentially started on Wall Street is still having an effect there. While New York's overall tax collections are up there, the amount the state gets from the financial sector has dropped significantly. During the financial crisis, then-Governor David Paterson said the state was losing “millions of dollars a day.”

Before the financial collapse, business and personal income tax collections from Wall Street accounted for up to 20 percent of New York state tax revenues. That declined to 14 percent last year, or $8.7 billion, according to the latest figures from the state comptroller.

The securities industry has shrunk. It provides 10 percent fewer jobs in New York City since the 2008 crisis that saw Lehman Brothers go bankrupt and Bear Stearns and Merrill Lynch sold off.

Neighboring New Jersey and Connecticut likewise rely on Wall Street, but not to the same extent as New York.

For these three states, the more immediate concern is rebuilding after Super Storm Sandy—the federal government has sent more than $60 billion in relief.

The states that are doing comparatively well this year cite higher revenues from the personal income tax, which provides some 40 percent of general fund revenue in the 41 states that collect it.

For the first month of 2013, personal income tax collections were up more than 20 percent in Oklahoma and 16 percent in Georgia (PDF). Minnesota (PDF) saw its corporate tax collections go up 50 percent at the end of last year as some companies moved up dividend payments before federal tax increases kicked in. 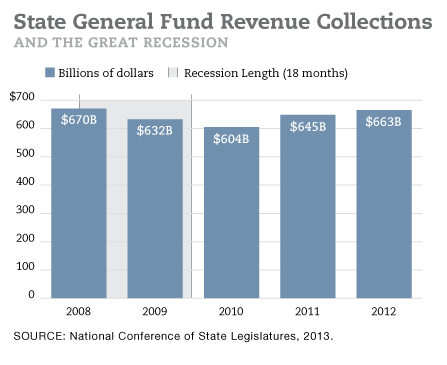 Many states are likely to see their income tax revenue increase for 2012 and then fall in 2013 because taxpayers decided to sell off capital assets before the end of 2012 in anticipation of higher capital gains rates imposed by the federal government. California, for example, predicted that capital gains taken by residents will increase nearly 70 percent in 2012 over the previous year.

“States are on a revenue roller coaster, and there is a bumpy ride ahead,” says Rockefeller's Lucy Dadayan. She says it will be hard for states to know if any increase in income tax collections is a true sign of a recovery or taxpayers cashing in before federal tax rates went up. “It will be tempting to treat unexpected revenue growth as a sign of continuing economic improvement, when it could mean instead that future revenue will be lower,” she says in the institute's latest report, co-written with Donald J. Boyd.

Surpluses for Some, Worry for All

Some states, including Iowa, Indiana and Tennessee, started the new session with surpluses, but none are planning to embark on new spending.  States are saving much of their surpluses for anticipated cuts in federal funding, a critical revenue source for many states; increases in Medicaid costs; or to provide a cushion to cut income taxes.

Overall, Medicaid is still the biggest budget worry for most states in the coming year. Medicaid spending continues to be the single largest component of total state spending at nearly 24 percent, easily surpassing K-12 education at less than 20 percent.

The pressing question is, just how much will Washington cut? The Federal Funds Information for States estimates states could see a $4.4 billion reduction in federal funds for fiscal 2013 if the sequester goes into effect.

Many of the biggest and most costly social programs would be exempt under the sequester, including Medicaid, food stamps and welfare. But grant programs affecting education, Head Start, transportation and Community Development Block Grants would all be cut. As Stateline reported, states with military spending would be hit hard.

“This is just bad,” Connecticut Governor Dannel Malloy, a Democrat, told Stateline. “Everyone's life is made more difficult (if the sequester happens), but we will move forward.” 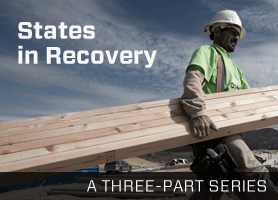 States are worried that the budget paralysis in Washington could jeopardize gains made in recent years. The federal government provides about one-third of state revenue, making it the largest single source of funds for some states. So the question of $85 billion in automatic federal spending cuts is crucial for states.

“The biggest challenge when we look at the economic situation is the mess here in Washington," Republican Michigan Governor Rick Snyder told C-SPAN.