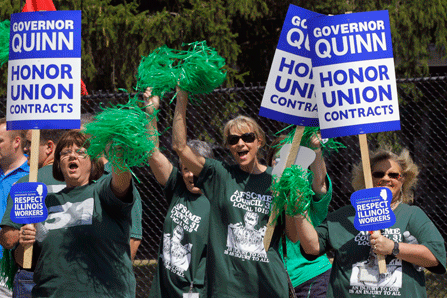 For weeks, the American Federation of State, County and Municipal Employees Council 31 had been threatening to strike and urging its 35,000 members to prepare by setting aside extra cash and stocking up on medical prescriptions. Prison guards and others in public safety roles are legally barred from striking.

Rank-and-file members will have to ratify the contracts in a statewide voting process set to begin next week. The details of the tentative agreement have not been made public.

“At a time when the state is facing unprecedented financial challenges, this agreement is fair to both hard-working state employees and all taxpayers of Illinois," Quinn said in a statement. "I want to thank the women and men who have stayed at the table for more than a year for their commitment to reaching an agreement.”

Union Executive Director Henry Bayer said the union is “very pleased that we were able to reach an agreement that protects our members' standard of living, and is fair to them and all Illinois citizens, even in these very challenging economic times.”

Illinois faces a backlog of unpaid bills that is expected to grow from $7.8 billion in the current fiscal year to $21.7 billion in 2018, according to a report released this week by The Civic Federation, a nonpartisan research organization.

Before the agreement was reached, the state appeared perilously close to what would have likely have been the largest strike of state workers anywhere in the country since the enactment of collective bargaining laws in the 1960s and 1970s, shocking many observers.

“The thought of a statewide work stoppage six months ago just seemed unimaginable,” Bob Bruno, director of the University of Illinois' Labor Education Program, said Wednesday before the tentative agreement was reached.

“No one could imagine this happening with a Democratic governor elected with labor support who had actually worked out some difficult concessionary agreements in the past and has an interest in running for re-election,” he said. “One couldn't imagine that there wasn't a point of agreement that they could come to.”

The reasons the negotiations went on for so long and came so close to a strike have as much to do with the Quinn administration's rocky relationship with AFSCME over the past few years —characterized by high-profile conflicts over pensions, facility closures and other issues — as they do with the actual proposals for wages and benefits that each side brought to the table. In fact, AFSCME is still fighting with Quinn in court about raises he promised at the bargaining table for July 2011 but canceled because of what he called inadequate funding from the legislature.

The only recent state worker strike of similar magnitude in recent history happened in Minnesota in 2001, when about 23,000 workers staged a two-week walkout over stalled contract negotiations. According to an account of the strike from The Associated Press, the state was suddenly left without social workers, driver's exam instructors, psychologists, food workers, fiscal auditors, nurses' aides, animal trainers and janitors, among others.

About 700 National Guard members were called in to help at psychiatric treatment centers, nursing homes and group homes.

The two state worker unions involved were ultimately able to extract concessions from then-Governor Jesse Ventura, but neither side was pleased with the result. Salary increases included in the final two-year contract didn't even make up for the two weeks of wages lost during the strike.

One of the key reasons state-employee walkouts are far less common than teacher strikes is that the absence of teachers in the classroom is a more effective tool for applying political pressure than the absence of workers in state agencies, says Martin Malin, director of the Institute for Law and the Workplace at the Kent College of Law in Chicago.

“Strikes by public employees are political battles, not economic battles,” Malin says. “Some people have jokingly said, ‘If state workers struck, would anyone notice?' It's not as immediately visible by as many people as teachers.”

Still, a strike of state workers would wreak havoc on the state's most vulnerable citizens in ways most people don't realize, Malin says. “At-risk children are going to notice it right away if all the Department of Children and Family Services caseworkers are on strike,” he says, “but they don't have a heck of a lot of political power.”