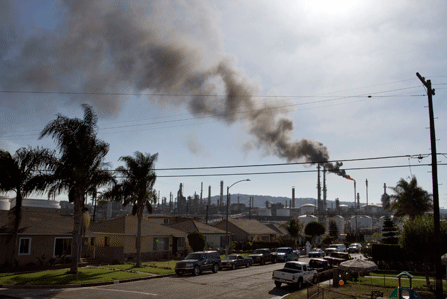 Air and water could get murkier, environmental officials warn, if forced budget cuts deal a heavy blow to state programs that carry out the bulk of inspections and pollution cleanups across the U.S.

The sequester, as lawmakers call it, would require 5 percent across-the-board cuts at the U.S. Environmental Protection Agency, shrinking grants that help fund a range of state programs. These are the functions that address polluted waterways, inspect drinking water for lead and cancer-causing compounds, repair aging wastewater systems and keep tabs on air quality.

“I think any cuts would be devastating to our ability to protect the public health of our citizens,” North Carolina state Representative Pricey Harrison, a Democrat, recently told a U.S. House subcommittee.

All told, states and the District of Columbia would lose $154.5 million for clean air and water programs, according to data released by the White House. That includes more than $12 million cuts in both California and New York, and $8.5 million lost in Texas. Every state would see reductions of more than $1 million.

That's on top of more than $46 million that would be gutted from state fish and wildlife programs.

The cuts would come as resources are increasingly stretched thin for states, which are responsible for most environmental inspections and enforcement. States conduct 96 percent of inspections at regulated facilities and 90 percent of enforcement cases, according to data compiled by the Environmental Council of the States. They also issue nearly all water, air and waste permits.

In recent years, federal funding has stayed the same for those programs, even as states are given new mandates.  New cuts would further strain the system.

Grants to state drinking water programs, for instance, have hovered at about $2 million per state over the past several years, according to Sarah Pillsbury, president of the Association of State Drinking Water Administrators and a regulator in New Hampshire. In some states, federal grants are the only source of funding for water supply projects, Pillsbury says, yet these projects face “an ever-increasing number of emerging contaminants.” That includes toxic chemicals found in hydraulic fracturing fluid, whose use is fueling the nation's energy boom.

The new cuts would jeopardize as many as 100 safe drinking water projects across that country, as well as more than 100 projects on waterways, according to the EPA. It would also mean 2,600 fewer inspections at waste sites, 290 leaking underground tanks left unaddressed and shutdowns of air quality monitors in some states.

For the most part, states — many of which have budget problems of their own — aren't likely to make up the lost federal revenue. Some governors have ordered spending freezes across agencies.

That includes Arkansas, which would stand to lose $1.6 million in federal air and water grants. Its Department of Environmental Quality relies on the federal funding for 38 percent of its operating costs, says Karen Bassett, its chief deputy director.

“At the end of the day, there's going to have to be a conversation between the states and the EPA about reducing our regulatory commitments,” she says. “So far, that hasn't happened.”