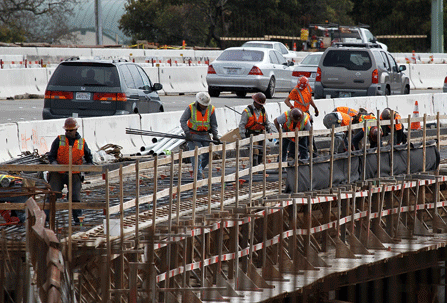 Municipal bonds finance a huge portion of the infrastructure building and repair undertaken throughout the country. (AP)

A panel of top tax policy analysts has warned the nation's governors they face an ongoing risk of increased borrowing costs if President Obama and Congress curb or eliminate the tax exemption on municipal bonds to bring down the federal budget deficit.

At the annual winter meeting of the National Governors Association in Washington, D.C. over the weekend, the analysts told the governors that proposals to tax the interest that investors earn from municipal bonds are a part of tax reform discussions on Capitol Hill and at the White House. Changing the tax treatment of the bonds is not involved in the current sequestration stalemate.

“The threat is very real,” Robert J. Leonard of the Akin Gump law firm told a committee of governors on February 23. “It's going to take vigilance, organization and the involvement of governors to avoid a policy disaster.”

State and local governments are fighting the proposals to cap or kill the tax exemption. Pennsylvania Governor Tom Corbett said the federal government loses about $43 billion a year in revenue from the exemption. But the tax break leverages over $400 billion a year, Corbett argues, in new road, bridge, school, hospital and water and sewer projects. The governors association says that taxing municipal bonds could increase borrowing costs for state and local governments by as much as 2 percent, causing a 25 percent spike in infrastructure costs.

President Obama, who emphasized the need to repair and expand infrastructure in his State of the Union address, has targeted wealthy taxpayers by proposing a 28 percent cap on the municipal bond interest exemption. Others in Congress have suggesting similar limits on the tax treatment of municipal bonds. Their goal is reducing the federal budget deficit by looking at all revenue sources.

Tax-writing committees in the Senate and House are planning to take up comprehensive tax reform, said Leonard, the former chief counsel to the House Ways and Means Committee. “I think it's realistic to say both chairmen appear very intent to move forward this year,” Leonard told the governors.

In his State of the Union address, Obama also proposed a new type of bond program similar to the Build America Bonds that were popular with many state and local governments. Part of the 2009 federal stimulus package, the Build America Bonds offered a federal subsidy on the interest cost of borrowing. The Republican-led Congress that took office in 2011 has not extended the program, citing its costs.

Illinois Governor Pat Quinn, a Democrat, praised Build America Bonds as a useful way to finance infrastructure. At $11 billion, Illinois was second only to California in its issuance of the bonds. “We've got to jump-start the economy with public investment,” Quinn said at the governors meeting.

Correction: The original version of this story incorrectly said that Thomas G. Doe of Municipal Market Advisors said most of the bonds sold as part of the Build America Bonds were refinancing of existing debt, not new projects. He was referring to tax-exempt municipal bonds sold in 2012.