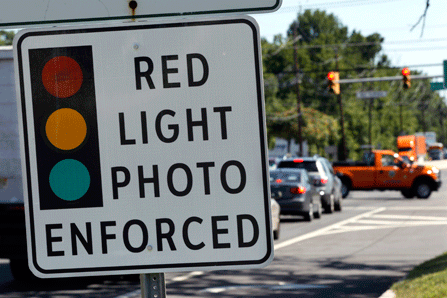 When it comes to red-light cameras, New Jersey Assemblyman Declan O'Scanlon says the people in his state have had enough. Nothing, he says, has generated more feedback in his five years as a legislator than his fight against the cameras.

“People realize the government is institutionalizing a system to rip them off,” says O'Scanlon, a Republican. The public is upset and problems in New Jersey led to a brief suspension of its traffic cameras last summer.

The outcry goes far beyond New Jersey. Traffic cameras spark heated debate nearly everywhere they are considered, and they are on legislative agendas throughout the country. This year, lawmakers in 22 states have filed more than 100 bills dealing with traffic cameras, says Anne Teigen, a senior policy specialist with the National Conference of State Legislatures.

The proposals range from outright bans on either speed or red-light cameras to rules to allow speed cameras in work zones to pilot programs to test the devices.

Where are the Red Light Cameras?

Despite the backlash, traffic cameras keep spreading. As recently as 2000, only 25 communities had red-light cameras, compared to more than 500 now.

Hawaii state Senator Will Espero, a Democrat, hopes to start a pilot program for red-light cameras on his home island of Oahu. He thinks red-light cameras would improve public safety. Espero says he sees cars running red lights all the time, but if there were cameras, he says, motorists would recognize “yellow doesn't mean speed up, it means slow down.”

Anne McCartt, the senior vice president for research at the Insurance Institute for Highway Safety, says that in debates over red-light cameras, not enough attention is focused on the dangers that they address.

“The bottom line is that red-light cameras reduce violations… and we see reductions in collisions, especially serious collisions,” McCartt says. The cameras even reduce red-light running at nearby intersections, where there are no cameras, she adds.

The institute, which is funded by auto insurers, recently studied the effect of red-light cameras in Arlington County, Virginia, a suburb of Washington, D.C. It found that, after enforcement began, half as many vehicles drove through intersections 1.5 seconds after the light turned red. The number of drivers cutting it closer, by going through intersections half a second after a red light, dropped by a quarter.

But O'Scanlon, the New Jersey legislator, says proponents focus too much on violations and not enough on safety. In many intersections, lights for all directions overlap on red for one second, O'Scanlon says, so violators who cross into an intersection within a second of the light turning red are not likely to hit cross-traffic.

At 24 intersections in New Jersey, the number of right-angle crashes decreased during the first year cameras were introduced, but the number of same-direction crashes increased. In both cases, the number of injury-causing accidents increased. O'Scanlon says the numbers show drivers are acting more dangerously around the cameras.

The reason New Jersey briefly suspended use of its cameras, though, had to do with the length of yellow lights that preceded red lights. The lights had not been tested by traffic engineers to make sure motorists had enough time to stop before going through a red light. One of the red-light camera manufacturers agreed to give ticketed drivers a small refund because of the problem.

Opponents of traffic cameras often claim that officials who install them are more interested in revenue for their cities or their campaigns than they are for safety. Two years ago, those concerns led Tennessee lawmakers to prohibit tickets based on photographic evidence for illegal turns during red lights, which led to a 73 percent reduction of tickets in Knoxville during the law's first month, according to The Associated Press.

But makers of traffic cameras have raised their profile in political circles. American Traffic Solutions, for example, contributed more than $450,000 to candidates for state offices since 2008, according to the National Institute on Money in State Politics. The vast majority of that went to candidates in Florida; the company gave money to politicians in eight additional states.

Meanwhile, Chicago Mayor Rahm Emanuel announced he will not renew the city's contract with Redflex Traffic Systems, Inc., because of revelations that the company paid for hotel stays and a Super Bowl trip for the city official who oversaw its contract.

Red-light cameras are explicitly allowed in 21 states, plus the District of Columbia, but are banned in nine states. The rest of the states have not weighed in either way, according to the Governors Highway Safety Association.

Speed cameras, on the other hand, are banned in more states than they are permitted. A dozen states prohibit them, while only two states and the District of Columbia permit them. Seven other states allow them only in certain areas or place other restrictions on them.