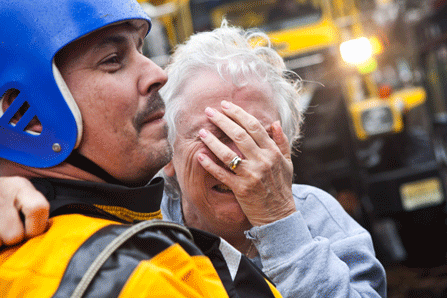 A woman cries on the shoulder of an emergency responder after being evacuated due to flooding caused by Hurricane Sandy, in Little Ferry, New Jersey. (Getty)

Insurers have long tried to encourage safe behavior—and minimize their payouts—by offering discounts to prudent policyholders and by lobbying for new laws designed to minimize risk. These efforts helped spawn widespread use of the most successful safety innovations of recent decades, including smoke detectors and seat belts.

Now some state officials and environmental groups are pushing the industry to tackle another threat to public health: climate change. They want insurers to crank up the volume on their longstanding calls for stricter building and land use rules in disaster-prone areas. But they also want them to go further by pushing for cuts in carbon emissions, which scientists say are causing warmer, more extreme weather by trapping heat in the atmosphere.

“The insurance industry, without a doubt, is in a unique position to influence society in reducing risks,” says Cynthia McHale, director of the insurance program at Ceres, a coalition of investors who advocate for sustainable business practices.

Why would insurers want to wade into that politically fraught debate? Because climate disasters are forcing them to pay more claims than ever before. Hurricanes, floods, tornados, droughts and wildfires continue to pummel the U.S. with growing frequency and ferocity, particularly in places with swelling populations.

So far, few U.S.-based insurers have joined the call for emissions reductions and other comprehensive solutions to climate threats. But the story is different overseas, where the subject of climate change is far less divisive.” For example, German-based insurer Munich Re Group boldly proclaims on its website that climate change is “one of the greatest risks facing mankind,” and boasts that it has “actively supported and advanced climate protection and adaptation to global warming.”

In the U.S., the insurance industry's total claims tab has trended upward for three decades, and the past few years have been particularly costly.

“Losses over the past few decades have become unsustainable,” says Julie Rochman, who heads the Insurance Institute for Businesses and Home Safety, a nonprofit that conducts research for the industry. “Way too many people are suffering irreparable damage…way too many people are losing their lives. We have to do something.”

In 2012, the country's warmest year on record, U.S. insurers were on the hook for almost $58 billion in losses, including as much as $25 billion from Superstorm Sandy, according to the Insurance Information Institute. That storm alone cost nearly as much as the average annual insurance loss in the entire United States over the previous 12 years.

That came on top of a bad year in 2011, when the federal government declared a record number of disasters and insured losses reached about $35 billion.

Although the industry could withstand volatility in the short term, some experts say a long-term continuation of the trend toward climate extremes could erode insurers' ability to underwrite natural catastrophes.

That would further strain public insurers of last resort, such as the National Flood Insurance Program or state-run property coverage programs in Florida and Louisiana. Such programs, designed to fill the gap when private insurers pull out of areas they deem too risky, stand on shakier financial ground. Their costs have exploded in recent years, and in some years they have paid out millions more than they have taken in.

“As long as the plans continue to grow, state finances will remain under threat and ultimately taxpayers, many of whom live nowhere near the coast, will continue to face the prospect of increased assessments in the years ahead,” the Insurance Information Institute said in a 2011 paper (PDF).

A role for states?

With those concerns in mind, a few state insurance regulators are nudging insurers to think more about climate change — in their pricing and in risk-modeling. The industry has long estimated risk by analyzing historic trends. But as the climate continues to shift, some argue, that data may no longer be the best predictor of what's ahead.

“Our principal interest is making sure companies stay solvent and stay in the market when climate change is having a big impact, says Mike Kreidler, Washington's Insurance Commissioner. Kreidler, one of the most vocal state insurance regulators on climate change, says insurers aren't pushing hard enough to respond to threats before disasters hit and damages add up.

Only one in eight U.S. insurance companies has a formal climate policy, according to a recent Lawrence Berkeley National Laboratory (PDF) study published in the journal Science.

That's why Washington State last year joined New York and California in requiring large insurers to tell state officials how they are responding to climate risks. Analysts at Ceres have crunched the data, which will be made public in the coming weeks.

The hope is that publicizing the results will spur companies to think more about the issue and to share best practices. “We are asking insurers to share their views of the risk of climate change so that we can be sure that the industry and regulators are appropriately prepared,” Robert Easton, a top insurance regulator in New York, said upon the announcement of the collaboration.

Several other states have administered a similar survey, developed by the National Association of Insurance Commissioners, on a volunteer basis. But response rates have generally been low.

The reporting requirements in Washington, New York and California applies to insurers that do business in those states and take in more than $300 million in yearly premiums. Commissioners say it will yield a large volume of data that will give states a clearer picture of companies' long term solvency.

Washington's Kreidler says the tremendous damage from Superstorm Sandy may prompt other states to join in.

But in New Jersey, hard hit by Sandy, state officials are unlikely to require disclosure. Marshall McKnight, a spokesperson for the state's Department of Insurance and Banking, says the state is focused on helping those uprooted by the storm get the claims promised in their damage insurance contracts.  At a recent news conference, New Jersey Governor Chris Christie, a Republican, said pondering Sandy's link to climate change is “not a concern to me.”

“Right now I'm dealing with people who are out of their homes, out of their businesses because of the storm and, candidly, I don't have time to deal with it,” he said.

New Jersey compiled a voluntary survey in 2010, an exercise that proved useful, McKnight says. But the department considers another round of questions redundant.

Meanwhile, in Colorado, still smarting from the worst wildfire season in its history, Democratic Governor John Hickenlooper recently launched a task force that will study how insurance policies can incentivize land management that promotes forest health and reduces fire risks.

Some experts contend that insurers' longstanding push for stricter building and land-use rules is sufficient proof they take climate change seriously. They point to the industry's new, $40 million South Carolina research center, where researchers study weather damage to buildings by simulating wildfires, hail storms and hurricanes with wind speeds up to 130 miles per hour.

Modern building codes are almost entirely the creation of the insurance industry. “Insurers have been protecting people against the risks of climate change since there's been insurance,” says Robert Hartwig, executive director of the Insurance Information Institute. “Most understand what's going on with climate. If not, they go out of business.”

Rochman, of the Institute for Business and Home Safety, generally agrees. But she acknowledges there is plenty of room for progress. Thirteen states, for instance, still don't have statewide building codes. Some that have them, such as Texas, don't enforce them uniformly.

Property safety is what Rochman calls the industry's “next great campaign.” Insurers have begun examining property more closely, looking at the sturdiness of roofs or siding, for instance, rather than a building's simple proximity to natural hazards.

But neither she nor Hartwig expects companies to pour resources into research or advocacy on the emissions side of climate change. And they say market realities — not regulators — will spur any other responses to weather threats.

“It's not [insurers'] business,” Rochman says of climate policy. “Though we can't control the weather, we can control the building stock.”