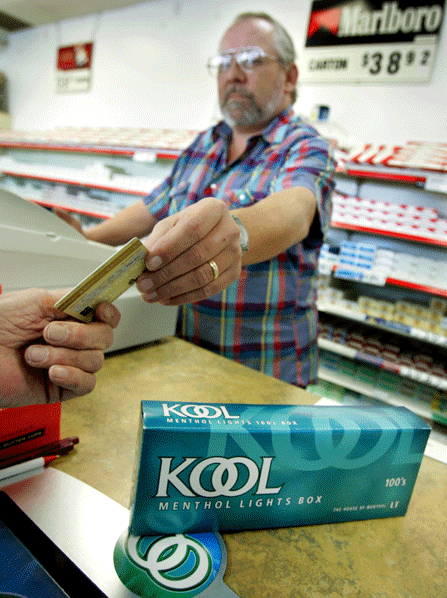 Several governors are looking at increases in the cigarette tax to make up for other tax reductions they want to enact. (AP)

When Minnesota Governor Mark Dayton announced a wide-ranging tax plan last month, he said that the changes would net the state $2 billion over the next two years. That number wouldn't exist, however, if it weren't for a flourish of ingenuity from analysts in the Minnesota Department of Revenue.

Currently, clothes are exempt from Minnesota's sales tax, but Dayton wants to eliminate the exemption for any item of clothing that costs more than $100. There was just one problem, says Susan Von Mosch, assistant commissioner for tax policy in the Department of Revenue. No one knows how much Minnesotans spend on clothing that costs over $100. The data doesn't exist.

The Department of Revenue's method of coming up with an estimate was to extrapolate based on data from New York State, which exempts  from its sales tax clothing that costs $110 or more. The new Minnesota clothing tax, the department predicted, would bring in $55 million in the first year it's fully implemented. That, anyway, is the best guess right now.

The sales tax on clothing is a relatively small piece of Dayton's plan, but it illustrates a much bigger issue: When states make substantial changes to their tax codes, it's often difficult to know how much money they'll end up collecting. States have been burned when they swapped one tax for another, then found themselves with far less revenue than expected.

Numerous governors are in the process of selling their legislatures and their voters on tax cuts, tax increases or revenue-neutral tax reform—with specific dollar figures attached. Yet, to a greater extent than most governors acknowledge, those projections come with significant uncertainty. In places where major tax changes pass, the accuracy of the advance numbers will go a long way toward determining whether or not budgets are balanced in the years ahead.

Already, 2013 is shaping up as the year of the tax swap—or at least the year of the tax swap proposal. Governors in Massachusetts, Ohio and Virginia all have major schemes to cut one tax while raising others. Besides altering the sales tax, Dayton's plan would also make substantial changes to personal income taxes, corporate income taxes, property taxes and cigarette taxes. Perhaps most ambitiously, Republican governors in Kansas, Louisiana and Nebraska are talking about increasing sales tax revenue—by raising rates, cutting exemptions or both—and using the difference to eliminate their income taxes entirely.

In doing so, they'll hope to avoid following in the footsteps of South Carolina or Texas. Prompted by a state Supreme Court ruling, Texas in 2006 traded lower property taxes for a higher cigarette tax and a new business tax. Together, these were supposed to make up much of the depletion in property tax funds. The cigarette tax has brought in the money the state expected, but the business tax has never lived up to its end of the bargain. Instead, it's fallen about $1.5 billion to $2 billion a year short. Part of the problem, explains Dale Craymer, president of the Texas Taxpayers and Research Association, is that that the tax is complicated—businesses get to choose among various exemptions they want to take—which has made accurate forecasts difficult.

The overly optimistic projections were a significant contributor to Texas' deep budget problems in 2011. They're also part of the reason a Texas judge ruled earlier this month that the state's schools have been unconstitutionally underfunded, setting up the possibility of another politically wrenching, court-mandated overhaul of the state's tax structure.

The same year Texas made its ill-fated tax swap, South Carolina approved a swap of its own known as Act 388. For most homeowners, the law ended property taxes for school operations entirely. To make up the difference, it raised the sales tax by one cent per dollar. The changes were supposed to be revenue-neutral. Instead, the sales tax quickly began falling about $100 million a year short of what was needed to make up for the property tax cuts, placing greater stress on the state's general fund.

Act 388 came with other unintended consequences, including more dependence on property taxes paid by businesses. Yet changing the law has proven to be a political non-starter. “Most of our public-policy makers in the state will tell you that they made a mistake,” says Otis Rawl, president and CEO of the South Carolina Chamber of Commerce, “but they don't know how to fix it without getting themselves unelected.”

South Carolina and Texas aren't exactly typical cases, but they do reflect the numerous challenges states face when they project the effects of restructuring their tax systems. For example, Nebraska Governor Dave Heineman's tax plan calls for eliminating the income tax and replacing it with a sales tax that applies to a far broader range of transactions. Nothing would seem easier than projecting the cost of the total elimination of a tax: all the revenue you had been collecting from the tax will be gone.

Yet the Nebraska Legislative Fiscal Office and Nebraska Department of Revenue have two different projections for how much eliminating the income tax will cost. In the 2017 fiscal year, the legislative office thinks the move will cost almost $170 million more than the Revenue Department expects. The reason: The offices have different assumptions for how fast personal income will grow. In percentage terms, the gap between the two estimates is relatively small, but it's the difference between Heineman's plan being revenue-neutral, which is how he's presented it, and turning into a revenue-losing tax cut.

The unpredictability of economic forces in general, of course, can throw off states' forecasts even when their tax structures don't change. But there are much bigger complications when states consider the big swaps governors are talking about this year.

In Nebraska, despite the competing forecasts on the income tax, the portion of Heineman's plan that may be susceptible to the greatest error is the package of sales exemptions he wants to lift. The trouble a state like Nebraska faces is that when it hasn't been taxing a transaction, it often hasn't had a reason to collect data on it.

Nebraska, like most states, regularly produces a “tax expenditure report” with estimates for how much the states' various tax exemptions, deductions and credits cost. These numbers, however, often represent best-guess extrapolations.

For example, Nebraska used data from the federal Department of Health and Human Services to estimate how much it would raise from applying its sales tax to medicine and medical equipment. But when medical groups testified on Heineman's legislation, LB 405, Doug Ewald, the state's tax commissioner, was surprised. “I'll be completely honest with you,” Ewald says, “we learned that we think some of our estimates are low based on the testimony we heard on LB 405.”

Like Heineman's proposal, Louisiana Governor Bobby Jindal's plan—which he is still formulating—will call for removing sales tax exemptions to pay for ending the income tax. He has said the plan will be revenue-neutral. Jindal has good reasons for that: He's pledged not to raise taxes, but a tax cut likely wouldn't fly in the legislature given the state's serious recent budget troubles. So neutrality may be the only politically viable option.

However, achieving even approximate revenue neutrality won't be easy. “Nobody knows exactly what people pay for haircuts in Louisiana. Nobody knows exactly what the beauty salons earn,” says James Richardson, a Louisiana State University economist and veteran member of the state's revenue estimating conference. “The numbers that are out there are very tentative. We'll essentially not know until we actually tax them how much is actually there.”

The estimates also generally don't account for another factor: the way tax changes could alter how taxpayers act. States usually assume that cigarette tax increases will reduce smoking rates because the link is so clear, but when it comes to other behavior-related tax revisions, there often aren't any reliable estimates at all. States also often assume 100 percent compliance with new taxes, even though they are sometimes difficult to enforce or administer. “I don't think there's any state out there that does dynamic forecasting,” says Von Mosch, of the Minnesota Department of Revenue. “Behavioral changes are not part of our estimates.”

This unpredictability isn't likely to stop governors and legislators from proposing big changes to state tax structures anytime soon. Democrats, Republicans, business groups, social service advocates and tax policy wonks all may disagree on what precisely is wrong with state tax codes, but, almost invariably, they all believe that something is wrong. Some uncertainty is the price of improvement.

What the people doing the estimates say is that the uncertainty points to the need for care and caution. Some states are going to great lengths to make sure their numbers are credible. For example, the Louisiana Department of Revenue has hired the consulting firm of Ernst & Young to a six-figure contract to make sure that Jindal's plan is, in fact, revenue-neutral.

In Minnesota, Von Mosch says the Department of Revenue has been working on Dayton's tax plan for months. Yet they're continuing to refine the estimates for the tax on clothing. “We are still working on that number,” Von Mosch says.