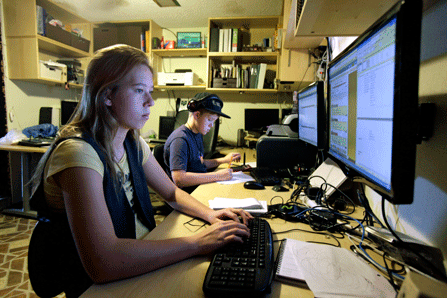 Online classes have exploded in popularity, with more than six times as many students enrolled in electronic K-12 courses now as compared to a decade ago, according to the U.S. Department of Education.

Advocates say online classes offer a more flexible and personalized form of education, allowing students to progress at their own pace and on their own time. Supporters also tout online education as a way to dramatically expand course offerings, particularly at rural schools.

But the rapid growth of online education is raising concerns—especially as more for-profit companies launch online programs. While unscrupulous or incompetent online educators may be rare, there are enough of them that many states are considering ratcheting up their oversight.

“The long and short of it is trying to make sure that as we grow this kind of education in the future,  there is accountability for them like any other school,” says Kelli Gauthier, a spokeswoman for Tennessee's education department.

States ran the earliest online programs, which began in the late 1990s. But individual districts and online charter schools are a growing percentage of the total.  Many of the new programs are operated by for-profit companies, such as K12 Inc. and Connections Education. These companies supply everything from the curriculum to the technology to the teachers on the other end of students' computers.

Florida has nearly 150,000 online K-12 students—more than any other state—and the Florida Virtual School was the first state-run online school in the country. Florida is one of only four states requiring students to take an online course in order to graduate, and it allows students to go beyond their local areas and pick online courses from other districts across the state. But Florida doesn't have much staff charged with overseeing online education.

“Up until a couple of months ago, I was the virtual education office in the state,” says Sally Roberts, who now has the assistance of another full-time worker. Others in Florida's education department do help Roberts vet potential course providers for a state-approved list of districts and charter schools.

Even with a robust staff, though, it can be hard for states to keep pace with rapid changes in the field, says John Watson, founder of the Evergreen Education Group, which puts out the annual “Keeping Pace with K-12 Online and Blended Learning” report. Watson says the challenge for states is striking a balance between encouraging innovation and holding online educators accountable.

“It's very difficult from a policy standpoint to catch that bad apple, while not impeding all the good actors,” he says.

There are enough bad apples that some states feel a growing sense of urgency when it comes to determining the appropriate levels of accountability and oversight needed.

Currently, Tennessee doesn't have anyone assigned to oversee online schools. But state lawmakers there are considering legislation, pushed by Republican Governor Bill Haslam, that would cap enrollment at the state's first statewide online school, Tennessee Virtual Academy. The school, which is run by K12 Inc., performed poorly on state tests in its first year.

Gary Miron of Western Michigan University, who has studied academic performance in online education, published a paper last July in which he found that fewer than one in three K12 Inc. schools reported making adequate yearly progress in 2010 under the federal No Child Left Behind law. Fewer than one in five of the full-time K12 Inc. schools rated by their states were deemed satisfactory. Miron says the results from other for-profit providers aren't much different, though public providers do have somewhat better results.

Online education companies acknowledge that lagging results in some states are an indication that online schools should be doing better. “That scrutiny has been painful, but necessary,” says Mickey Revenaugh, a co-founder of Connections Education.

Revenaugh says schools need to identify the source of their performance problems—whether it is high attrition rates or the academic preparation of incoming students—and adjust their programs to meet those needs. But she points out that with online students coming from a wide variety of schools, some of the problems in student performance could be the result of prior academic deficiencies. She argues in favor of measuring academic performance based on students' growth during the year, a direction in which several states are headed.

Schools operated by the Connections firm emphasize constant scrutiny of student performance data, and Revenaugh thinks states should also be monitoring student performance more regularly for online programs. “If your virtual school isn't graduating anybody, that shouldn't be something you find out once a year,” she says.

With the majority of students taking online courses part-time in conjunction with traditional courses, it's hard to measure student performance in some states even once a year. Florida aggregates the statewide performance of students taking online courses from a particular provider to hand out the same kind of letter grade that traditional schools receive. But in many other states, student results in online classes get folded into the overall performance of their schools, making it difficult to pinpoint differences in performance between online and traditional classes.

Utah is one of a handful of states that allow students to pick online courses from an array of providers. It provides students and parents with information about academic performance in those courses with the expectation that students and parents will gravitate to better-performing courses. “At the heart of this program, there's the idea of market forces,” says Cory Kanth, who oversees the program.

Utah and Florida also build incentives for better performance into their funding structure. In Utah's course choice program, per student funding from the state depends on whether the student completes the course (the funding is deducted from what the state would have funneled to the student's neighborhood public school). Providers are paid based on completion in Florida, too.

But in the majority of states, funding is based on the head count during one or two days, or the average daily attendance. That system incentivizes providers to drive up enrollment, Miron says, even if it means they're taking in students who aren't ideally suited to online education.

Even advocates of online education say that it's not for everyone. It requires a certain degree of self-motivation, and the active participation of a parent or some other adult to help with classwork and ensure that a student is keeping up. Despite the rapid growth during the past decade, only a small fraction of students in the country take even one class online, and observers don't expect digital classrooms to replace the neighborhood school anytime soon.

Many online advocates place their hopes in “blended” learning, which combines the personalization of online instruction with the face-to-face support of traditional classes. The major players in the online sphere have rolled out their versions of a blended system, and startups such as California's non-profit Rocketship Education have been expanding rapidly.

Connections' Revenaugh says that Ohio legislators took an important first step last year in keeping up with “blended” learning: They became the first state to define it.