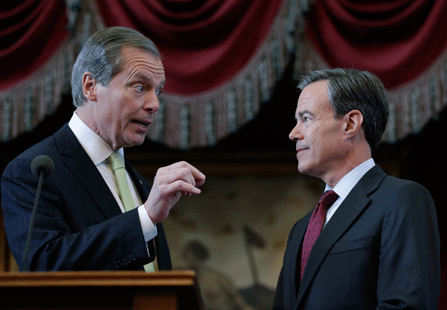 AUSTIN, Texas – Newly elected to his third full term, Texas Governor Rick Perry was at the peak of his powers when the state's last legislative session began in January 2011. Widely viewed as a front-runner for the Republican presidential nomination, Perry "was the man among men,” says Bill Miller, a top lobbyist in town.

That's not the case anymore. Perry's presidential run will perhaps best be remembered for what he didn't remember: the name of the third federal agency he wanted to cut if elected president.

Perry's political standing has been weakened, while his state's financial position has dramatically improved. During the last legislative session in 2011 (the Texas Legislature meets for six months every other year), Texas lawmakers slashed more than $14 billion from the state's $188 billion two-year budget. This time around, state lawmakers may have more revenue than they can spend, since under Texas law they're limited to spending no more than the rate of economic growth – projected at 10.7 percent – above the previous budget level.

Perry, along with leaders in the House and Senate, wants to draw money from the state's Rainy Day Fund to pay for water conservation projects to aid the drought-stricken state and road repair and construction to combat traffic congestion. That spending would require the approval of two-thirds of the legislature. At the same time, he wants to cut taxes further and return some unspent money to Texas taxpayers.

If Perry is able to win support for the new money, it would be a signal that the Tea Party wave that helped elect new U.S. Senator Ted Cruz may have begun to ebb in Texas. If he isn't, it would be a sign that the state's most conservative Republicans have a firm grip on the party and, by extension, Texas politics.

The coming debate also raises broader questions for Texas, a state steeped in the gospel of self-reliance: Should it shrink government even more, or should it spend more money on education, healthcare and infrastructure to meet the needs of its growing, and youthful, population?

Those questions will be settled by legislative chambers whose leaders come into the session with different political goals.

Lieutenant Governor David Dewhurst, the Republican who leads the Senate, returns to Austin determined to prove his conservative bona fides after a bruising run for the U.S. Senate in which he was outflanked on the right by Cruz. He's said publicly that his goal is to make Texas “the most fiscally and socially conservative state in the country.” For Dewhurst that translates into support for drug testing of welfare recipients, a so-called “fetal pain” bill that would ban abortions after 20 weeks, a voucher-like scholarship system for private schools and strict fiscal discipline.

Dewhurst has assigned some of the Senate's more conservative members to chair key committees, but this session has gotten off to a less acrimonious start than the last one. “Everything's kind of mellow,” says Democrat John Whitmire, the longest-serving member of the Senate. “Last session we started out fighting about Voter ID, it was very intense from day one.”

Republican House Speaker Joe Straus, who has held his post since 2009, has survived numerous challenges from conservatives who deem him too friendly to the minority party. But Straus unabashedly defended a bipartisan approach in opening the session this year. “In the Texas House, we don't put the Republicans on one side of the room and the Democrats on the other,” he said. “In our House, there is no aisle that divides us.”

Dewhurst and Straus support Perry's proposal to draw money from the Rainy Day Fund to pay for water and transportation spending. But despite their combined power, it's not certain they will be able to marshal the required two-thirds majority in each chamber required to approve the spending. “Many in the Governor's party have drawn a line in the sand saying 'No Rainy Day Fund, no fees, no spending,'” says Dallas Representative Rafael Anchia, a Democrat. “And that's a hard line.”

On the flip side, Perry's call to cut taxes further and return unspent tax money could be an even tougher sell, even in his own party. “There's a point at which even a good conservative has to say, 'Wait, I do believe limited government has a role, and in that limited role you have to pay for it,'” says state Senator John Carona, a Republican.

Perry will need at least a few Democratic votes to reach the two-thirds majority he needs for the infrastructure spending. Democrats hope that they can use that leverage to restore some of last session's cuts to healthcare, higher education and, particularly, K-12 schools, which saw more than $5 billion cut from their budget in the last session.

That last part is complicated by a series of six education lawsuits currently making their way through the state courts. Democrats and some Republicans would like to restore some of the education cuts this spring, when the money would be in time to help schools next year, but budget leaders say they're inclined to wait until after the cases are decided. School funding advocates won the first round, but the final word will likely come from the state Supreme Court after the legislative session is over.

Many in his own party hope he will not seek a fourth full gubernatorial term in 2014, and instead allow Attorney General Greg Abbott to seek the Republican nomination, which would help open up the pipeline for future Republican leaders and combat what some perceive as voter fatigue with the state's longest-serving governor.

Meanwhile, Texas Democrats—who haven't won a statewide race since 1994—hope that the increasingly Hispanic and urban population of the state will improve their political fortunes. That idea has begun to attract some national attention and Anchia, the Democrat from Dallas, expects his party to achieve gubernatorial success in Texas by the end of the decade.

Republicans and observers throw cold water on that assumption. The only way Democrats can achieve a resurgence, says Mark Jones, chair of the political science department at Rice University, will be if Republicans continue antagonizing Hispanic voters. But even then Democrats would have to do a much better job registering and encouraging Hispanics to vote.

James Henson, director of the Texas Politics Project, says that the emphasis on demographic shifts masks the fact that Democrats currently have limited organizational capacity and fundraising ability and a shallow pool of potential statewide candidates that doesn't go much beyond state Senator Wendy Davis from Fort Worth and brothers Joaquin and Julian Castro, who serve in Congress and as Mayor of San Antonio, respectively. “Demographics have become kind of a security blanket,” Henson says.

State Representative Harvey Hilderbran says that he and other Republicans recognize the need to moderate their tone toward Hispanics. “We got away with admitted mistakes,” he says. But he still thinks Democrats are unlikely to see any real statewide success for at least a decade. “The only way that happens is if Republicans hand it to them,” he says.