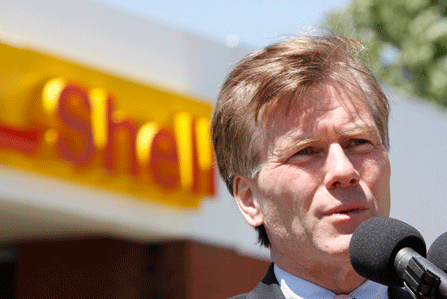 Virginia Governor Bob McDonnell appears at a gas station in May 2011. This year, the Republican governor wants to eliminate Virginia's gasoline tax, while raising other taxes and fees to increase transportation spending. (AP Photo/Steve Helber)

In the search for more transportation money, governors and state lawmakers are largely avoiding one of the most obvious and straightforward funding sources: state gasoline taxes.

Voters hate the per-gallon charges, even when they are rolled into the price at the pump. As Maryland Governor Martin O'Malley said recently, “If you ever put the word ‘tax' in front of the word ‘gas,' you're sure to get a whole collection of boos, hisses, throwing chairs and tables.”

Gas taxes create other headaches, too. The biggest drawback is that states typically levy gas taxes on a cent-per-gallon basis, so the resulting revenue does not rise with inflation.  Plus, drivers buy less gas per mile as cars become more fuel efficient. While environmentalists cheer the reduction in pollution, state budget officials worry about the dwindling revenue. No wonder public officials this year seem to view gas tax hikes as a last resort.

Instead, they have proposed selling bonds backed by higher tolls, tapping reserves or surpluses, taxing miles driven instead of fuel bought or hiking income or sales taxes. In fact, Virginia Governor Bob McDonnell wants to get rid of the gas tax altogether.

“All of these governors are getting creative,” says Marcia Hale, president of Building America's Future, a group that supports more spending on infrastructure. “They think, at the moment, that (the gas tax) is a political non-starter and they need to find ways to do things.”

States and localities are looking for new funds for transportation, in part because the prospect of the federal government coming up with new transportation dollars is slim, Hale says. Congress passed a two-year transportation law last summer, but the agreement did not include a long-term fix for financing the Highway Trust Fund. The trust fund is funded primarily by the federal gas tax, which has not been raised since the early Clinton administration. But several times since 2008, Congress added more money to the trust fund to keep it in the black.

Jack Basso, director of program finance and management at the American Association of State Highway and Transportation Officials (AASHTO), says raising gas taxes is a “political nightmare” because the public thinks the money is being wasted and overestimates how much they pay in gas taxes. “We have to do a lot better job in telling people what they do pay,” he says.

Ideas for new transportation funding reflect the political priorities of their authors.

In Virginia, for example, the main source of money in McDonnell's plan to eliminate the gas tax is a hike in the sales tax rate. Republicans like McDonnell favor a heavier reliance on sales taxes over income taxes. In Missouri, Republican lawmakers are discussing whether to ask voters to approve a 1-cent sales tax for transportation at the same time they are working on ideas to cut income taxes.

But in Massachusetts, Democratic Governor Deval Patrick proposed an income tax hike designed, in part, to shore up transportation funding. His plan also includes a cut to the state's sales tax. Democrats generally favor a heavier reliance on the income tax, because it has less of an impact on people with lower incomes.

“You'll notice they're still picking the least painful options for those particular governors ,” says Joseph Henchman, a vice president of the Tax Foundation. He says the governors in both Virginia and Massachusetts are “playing games” by promising more than they can pay for, while scoring political points as well.

Ohio Governor John Kasich wants to increase tolls on the Ohio Turnpike and use the new revenues to back bonds, which would pay for improvements chiefly in northern Ohio where the toll road runs. His neighbor, newly inaugurated Governor Mike Pence of Indiana, asked lawmakers to divert a part of the state's surplus for roads. And Texas Governor Rick Perry proposed tapping nearly a quarter of the state's $12 billion rainy day fund for water and transportation projects.

To be sure, a few states are also considering gas tax increases. The Wyoming House passed a 10-cent hike, which would be the state's first fuel-tax hike since 1998. A competing proposal in the Senate to use severance tax money has stalled. In New Hampshire, Democrats in the state House are weighing a proposal to hike the gas tax by 12 cents over three years.

Pennsylvania Governor Tom Corbett, a Republican, is widely expected to announce a hike on the taxes gas stations pay for fuel, as the cornerstone of his $1.9 billion transportation funding package. Pennsylvanians are evenly split on the idea, according to a recent Quinnipiac University poll, but four out of five predict they will pay more for gasoline if it passes.

Most of the proposals are a long way from becoming law, as most legislatures have just started getting to work this year.

Still, the most-watched proposal so far is McDonnell's proposal to eliminate Virginia's gas tax. If it passes, Virginia would be the only state without one.

For consumers, it would come with a big trade-off. At the same time he wants to stop collecting gas taxes, the governor wants to raise the sales tax rates. His plan depends, in part, on Congress passing a law to tax more online purchases. It is a long shot, considering the idea has been around almost as long as consumers have been buying products on the Web and has made little headway. McDonnell also wants to hike vehicle registration fees and impose a new charge on owners of hybrid and electric cars. The package would bring in $845 million more a year for transportation.

The plan cleared its first legislative hurdle Wednesday, when a House committee advanced it. But the idea still faces significant opposition. Americans for Tax Reform, the group headed by Grover Norquist that encourages officeholders to pledge not to raise taxes, has been especially vocal.

The reason is simple, says Josh Culling, the group's state affairs manager: “It is a big tax hike.”

The Sierra Club opposes McDonnell's elimination of the gas tax, even though it supports other parts of the plan. “What the governor's proposal does is take away one of the most commonly used, well-accepted user fees we have in our country today. If you drive on the roads, you pay to help build and maintain them,” says David Dickson, the transportation manager for the group's Virginia chapter.

Finding more money for transportation, especially for the traffic-choked Hampton Roads area and the suburbs of Washington, D.C., has been an issue that has dogged Virginia governors for more than a decade. Rural Republican legislators have little reason to raise taxes that will chiefly benefit urban and Democratic areas.

Transportation advocates are watching closely to see whether McDonnell can pull off the deal this year. “I don't know whether he's going to be successful with this,” says Hale, the president of Building America's Future, “but you've got to give him some credit for trying.”