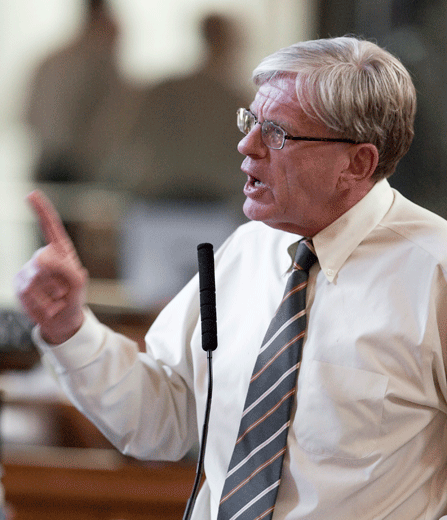 Nebraska state Senator Brad Ashford of Omaha speaks to the legislature in Lincoln.

LINCOLN, Nebraska — If Brad Ashford were a state senator almost anywhere, the step he took in the waning days of 2011 might have foreclosed any hope for future legislative accomplishments. Saying the Republican Party here was no longer the place for moderates, Ashford announced he was becoming an Independent—in a legislature that was heavily Republican.

In other states, Ashford would likely have been stripped of his committee assignments and banished from his party caucus. Lucky for Ashford, though, he's a state senator in Nebraska. “There was no reaction at all,” he says. “None.” Earlier this month, Ashford was reelected the chairman of the Judiciary Committee. No one even opposed him.

This is life in the nation's only officially nonpartisan legislature. In Nebraska, voters pick legislative candidates on ballots that don't say who is a Republican and who is a Democrat. Majority and minority party caucuses don't exist. It's easy enough to figure out which lawmakers are Republicans and which are Democrats, but often it hardly matters, as Ashford's experience shows.

But the same traditions that have produced bipartisan comity within the legislature are a source of partisan frustration outside of it. The state Republican Party's official platform calls for making the legislature partisan and, from what's transpired in Nebraska over the last year, it's easy to see why. The legislature has thwarted the plans of Dave Heineman, the state's popular conservative Republican governor, and has even overridden some of his vetoes on prominent legislation.

Now, the relationship between the Heineman and the legislature is about to be tested again. This month, Heineman proposed making Nebraska the first state in more than 30 years to abolish its income tax. Heineman also is an opponent of the Medicaid expansion under the federal health care law, but some key Republican legislators favor expanding anyway.

The tax and Medicaid debates have large implications for Nebraska's citizens, its businesses and its budget. But they also could say something about the character of the legislature itself. The question Nebraska's legislature may confront this year, and in coming years, is to what extent its nonpartisan tradition can endure in an ever more partisan era.

Nebraska's legislature has been different from every other state ever since 1934, when, inspired by Progressive Era ideas of good governance, voters approved a constitutional amendment that made the legislature both nonpartisan and unicameral, with only one legislative chamber. It's likely, however, that it has never been quite as different as it is now.

Scholars and political observers agree that most state legislatures have become substantially more partisan over the last 10 to 15 years. Party-line votes are more common, fewer minority-party members gain positions of power and collegiality between members of different parties has waned. Perhaps the only thing keeping many state legislatures from being as partisan as Congress is that Congress keeps becoming more partisan, too.

In Lincoln, in contrast, lawmakers continue to experience a body that is nonpartisan not only in law, but in practice. “We don't have majority whips,” says Senator Galen Hadley, a Republican who chairs the Revenue Committee. “We don't have majority leaders. We don't have caucuses. We're 49 independent agents, basically. To me, what's important about that is every time I bring a new bill, I have to develop a new coalition.”

No recent event has better illustrated the extent of the legislature's antipathy to party politics than when it selected new committee chairs by secret ballot earlier this month. Mark Fahleson, chairman of the Nebraska Republican Party, asked legislators to select only conservatives as committee chairs and to not pick Democrats, mentioning Ashford by name as the sort of senator they shouldn't choose.

It's understandable that Republicans believe they should rule the legislature in a state where every constitutional officer and every member of the congressional delegation is a Republican, where registered Republican voters outnumber registered Democrats 48 percent to 32 percent and where, even without the benefit of party labels, voters managed to select a legislature with 30 Republicans and only 17 Democrats. Fahleson's message, though, was totally ignored.

In fact, Ashford's selection wasn't even the most contrary to conservative Republican sensibilities. A former Democratic national committeeman and two former employees of the Nebraska Democratic Party were named committee chairs, including Heath Mello, who will head the powerful Appropriations Committee. In all, the chairmanships were split almost evenly between Republicans and Democrats.

Heineman stayed out of the committee controversy, even though no one likely had more at stake in the decisions — and at stake in the overall direction of the legislature — than he does.  Last year's session ended with the legislature overriding Heineman's vetoes on two prominent bills, one to provide government-funded prenatal care to low-income women, including undocumented immigrants, and the other to allow cities to increase sales taxes.

Heineman's action that irritated some legislators the most, however, wasn't his involvement in elections. It was his opposition to a pay raise for legislators that the legislature itself had placed on the ballot. Lawmakers make $12,000 a year in keeping with a tradition of citizen legislators that Heineman supports. But being a citizen legislator on that salary isn't easy. Senator Amanda McGill, for example, says she has worked multiple part-time jobs, including at Target.

Heineman linked his opposition to the prenatal care bill vote, saying the legislature didn't deserve a raise. Overwhelmingly, Nebraska voters agreed. Some legislators were irked. “The governor over the last few years has adopted the mentality that if you're not with me 100 percent of the time you're against me,” says Senator Bob Krist, a Republican, who wrote an opinion piece with the headline, “Heineman threw Legislature under the bus,” for the Grand Island Independent. “Intelligent people are going to disagree on issues.”

This level of discord has not been the norm for the eight years that Nebraska has been led by Heineman, whose extensive legislative accomplishments include the largest tax cut in Nebraska history in 2007. Nor might it become the norm going forward. With a new year, legislators and Heineman say they're ready for a fresh start.

Independence from the governor has been a hallmark of the Nebraska legislature ever since it became nonpartisan, says Charlyne Berens, a University of Nebraska professor who has written two books about the state's legislature. Conflicts between the legislative and executive branch happen in every state, but it's harder for governors to win these fights in Nebraska.

Just last year, Kansas Governor Sam Brownback used primary challenges to turn out the moderate Republicans who led his state's Senate, replacing them with conservatives who are more supportive of his agenda. But Nebraska governors don't have any partisan legislative primaries in which to mobilize their supporters. All candidates run on a single ballot, with the top two advancing to the general election. Nor do they have the benefit of legislative party caucuses that impose discipline elsewhere.

As a result, even a governor as popular as Heineman — he sported a 74 percent approval rating in one poll last fall — can't always get his way. “I think you're going to continue to see the legislature be more independent,” says Senator Kathy Campbell, who sponsored the prenatal care bill. “I do, without a doubt.”

To Campbell, that would be a good thing. Heineman, like many other Republicans governors, opposes the Medicaid expansion in the federal health care law. Campbell, who also is a Republican and chairs the legislature's Health and Human Services Committee, is the expansion's leading backer in Nebraska. She says she's close to securing the 25 votes needed to pass the expansion, but that it's not clear yet whether she can get the 30 votes to override Heineman's expected veto.

Meanwhile, Heineman has big plans of his own.  His agenda includes ending both individual and corporate income taxes entirely. Heineman pushed for tax cuts last year, but got a only small part of what he wanted. This year, he's trying a different approach.

Though the income tax accounts for more than half of the $4 billion or so in taxes Nebraska collects each year, what Heineman is proposing isn't really a tax cut at all. He wants the state to still bring in as much money as it does now. To achieve this revenue neutrality, his plan would greatly reduce exemptions in the sales tax. Exemptions that long have been considered politically sacrosanct — on prescription drugs, hospital beds, dorm rooms, purchases by churches and inputs for agriculture and manufacturing — would be gone.

Heineman's case is that for entrepreneurs, it's the income tax that matters most. “If everybody says I won't give up my exemption, then I'm going to tell them you're for the status quo,” he says. “You're for losing our sons and daughters to other states that are going to give them better-paying jobs. You can't have it both ways here.”

So far, key legislators like Hadley and Greg Adams, the new Republican speaker, say they're keeping an open mind and credit Heineman for beginning an important discussion. Still, many legislators don't expect Heineman will come close to getting all of what he wants. The governor acknowledged that possibility by putting forward a second version of his plan that targets fewer sales tax exemptions and focuses on eliminating corporate income taxes and cutting taxes on retirees.

But Heineman did gain at least a few enthusiastic backers in the legislature when he laid out his plan in his state of the state address, including the new senator he helped elect, Bill Kintner. “If it wasn't a formal setting,” says Kintner, whose campaign website was www.kintnercutstaxes.com, “I would have done a cartwheel I was so happy.”

No matter how this year's debates play out — even if lawmakers continues to cross their popular governor — a groundswell of opposition to the legislature as it exists today is unlikely. No one expects the changes that would formally alter the legislature's nonpartisan character, such as party labels on ballots and party caucuses in the legislature. Heineman isn't pushing for those steps.

But, some close observers of the legislature, such as Berens, wonder whether the legislature's nonpartisanship could erode more subtly. The campaign experiences of legislators today aren't like their counterparts a decade or two earlier. Both major parties have become more active in supporting their preferred candidates. Independent groups on the right and left are more active in elections, too.

It's possible that the next generation of legislators will be more loyal to these groups. Even without any legal changes, a legislature that's less welcoming to someone like Brad Ashford is easy to imagine. In Nebraska, this new generation could come quickly. Nebraska has some of the strictest legislative term limits in the country, with legislators limited to two four-year terms consecutively.

“There's a possibility with that turnover that you lose some of that respect for the heritage of the legislature, a nonpartisan, unicameral legislature,” Speaker Adams says. “Do I see it? Not necessarily. Is it a concern to me? Yes.”