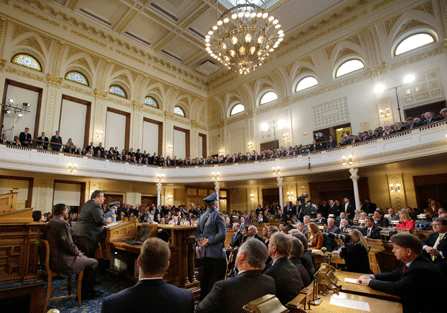 Governor Chris Christie delivers his 2013 State of the State address to the New Jersey Legislature. (AP)

With the national economy picking up and the housing market improving, states are poised in 2013 to finally rebound from the recession's lingering revenue crunch. But continued budget delays in Washington may dampen that prospect. (See Stateline infographic.)

For all the talk about the fiscal cliff, states already know what a free-fall in revenue feels like; they experienced one in the 2008-2009 recession. Back then, Washington bailed the states out, sending billions to help back-fill the massive deficits. Now states face the prospect of digging out of new budget holes created by belt-tightening in Washington.

“We fell off the cliff and we are limping our way back up,” says Donald J. Boyd, senior fellow at the Nelson A. Rockefeller Institute of Government in Albany. The latest figures from Rockefeller suggest that state tax collections are back at the levels they reached before the recession. But adjusted for inflation, taxes are still below their 2008 peak.

“We're not yet back where we need to be,” says Scott Pattison, executive director of the National Association of State Budget Officers. NASBO's latest survey predicts total general fund revenues will surpass peak pre-recession levels this year for the first time since the onset of the recession. Still, Pattison warns, “money is going to be tight for the foreseeable future, for several years at least, no matter what happens.” 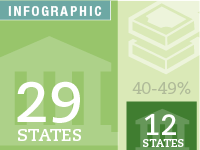 See Stateline Infographic: How Federal Funding to States Has Changed. Federal money on average accounts for about a third of state budgets, but the amount varies widely among the states.

Several crucial deadlines looming from Washington will have huge consequences for the budget year that begins July 1 in most states. The deal that Congress and President Obama reached in early January averted the most severe tax increases expected from the fiscal cliff, but put off the question of $85 billion in spending cuts for fiscal 2013 until March 1, a crucial question for states since the federal government provides about 30 percent of their revenue. For some states, that amount is even more (see chart).

And while House Republicans agreed recently to extend U.S. borrowing authority until later this spring, states could still get ensnared in the debate over whether to raise the debt ceiling, the legal limit on how much the United States can borrow. The last time that the U.S. government nearly defaulted, in 2011, five states (Maryland, New Mexico, South Carolina, Tennessee and Virginia) faced seeing their top credit ratings downgraded because they rely so heavily on federal spending or borrowing. A federal default would have made it more difficult for the states themselves to borrow.

The current set of fiscal deadlines could open broader deficit reduction talks, putting policies important to states on the table. A deficit reduction deal could include major changes in entitlement programs, such as Medicaid, and the tax-free treatment Washington gives to state and local government bonds to help market them.

States are unsure how any of these talks will turn out. “All this uncertainty really puts a crimp on the potential for companies, individuals and states to embark on serious planning for the future,” says Sujit M. CanagaRetna, a senior fiscal analyst at the Council of State Governments. “We're lurching from one crisis to another and not having any set plan.”

Advocates for smaller government counter that states shouldn't rely so much on money from the federal government in the first place. “Federal bailouts -a.k.a. 'stimulus,' have created a disincentive for the states to pursue spending reforms,” says Tad DeHaven, a budget analyst at the Cato Institute, a libertarian think tank in the nation's capital.

While state revenues are gradually recovering from the dramatic recession-period decline, they are still not growing quickly enough to keep pace with Medicaid costs, looming pension bills, and increased expenditures for education and infrastructure.

The recovery has also been uneven. States such as North Dakota and Nebraska have been flush during the recession because of boom times in energy and commodities, while Nevada and Rhode Island still face double-digit unemployment rates and tight budgets, in part because of the housing bust.

Provided the hit from Washington this year isn't too great, a group of states including Iowa, Indiana and Florida will spend much of this year debating what to do with budget surpluses. Even California, which every year for the past decade has had to dig out of a multi-billion-dollar deficit hole, now has a budget that is roughly in balance and talk is of surpluses. Governor Jerry Brown's budget assumes a $1 billion surplus by the end of 2013-14, while the state's independent analyst projects a $1 billion surplus in 2014–15. This dramatic turnaround is due in large part to voters approving Governor Brown's temporary tax increase last November.

But revenues are tight and deficits are still showing up in unlikely places. Alaska, which has stashed away $16 billion in reserves, the most of any state, is looking at a possible deficit for the first time since 2005, pegged at $400 million, because of fluctuations in oil prices. Kansas has $700 million less in revenue after a massive income tax cut last year. “We're facing a huge hole,” says Kansas State Senator John Vratill, who sits on the chamber's Ways and Means committee.

The hard dip in revenues from reducing the personal income tax in Kansas has not dissuaded Republicans from pressing for similar income tax cuts in other states. Proposals to cut or outright eliminate the income tax are already flaring in Arkansas, Indiana, Iowa, Louisiana, Nebraska, North Carolina, Oklahoma and Wisconsin.

Lawmakers in Washington State will be figuring out how to make up a $900 million shortfall in the next biennium while at the same time dealing with a recent court ruling that declared the state's K-12 school funding inadequate. State Representative Ross Hunter, who sits on the Ways and Means panel, estimates the ruling could cost the state $1.5 billion. At least nine other states have school finance challenges working their way through the courts that could affect budgets this year.

In Illinois, Governor Pat Quinn has called the state's pension debt, the country's largest at $95 billion, “our state's own fiscal cliff,” but efforts to make sweeping changes failed again in early 2013. Illinois already has the lowest credit rating of any state from Moody's Investors Service and it could go even lower because of the state's pension debt.

And New York and New Jersey, still struggling to recover from Hurricane Sandy, both face $2 billion shortfalls. Congress did not aprove the $60 billion in storm relief states were asking for at the start of the year. The package now seems to be moving forward, but the delay outraged Northeast governors. “This is why people hate Washington, D.C.,” New Jersey Governor Chris Christie said when politics prevented a vote on the plan.

With Congress unlikely to spend more money to fix long-neglected roads and bridges, look for states to consider new ways to fund transportation projects. The Republican governor in Virginia, Robert McDonnell, has already unveiled a sweeping proposal to eliminate the state's gas tax and pay for road and infrastructure upgrades with an increase in the sales tax. Massachusetts Governor Deval Patrick, a Democrat, wants something very different for transportation: a higher income tax and a lower sales tax, with revenues going into a new public works fund.

Overall, though, Medicaid is still the biggest budget worry for most states in the coming year. That's because Medicaid spending continues to be the largest component of total state spending at nearly 24 percent, easily surpassing K-12 education, which takes up less than 20 percent.

Ten states are already reporting spending overruns for Medicaid and other health care programs for the current fiscal year, compared with six at this time last year, according to the National Conference of State Legislatures. Maine, for example, is seeing costs continue to go up even as Medicaid caseloads go down. But nowhere is the deficit higher than in Texas, which faces a staggering $4.3 billion hole in its Medicaid budget. The state has some $8 billion in its rainy day fund, but lawmakers are reluctant to tap that fund to make up the entire difference. 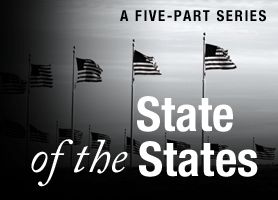 See Stateline's 13th annual State of the States report, on key issues with a particular emphasis on the relationship between states and the federal government.

One of the reasons many states are doing comparatively well is because of higher revenues from the personal income tax, which provides some 40 percent of general fund revenue in the 41 states that collect the tax. But the problem with relying on the income tax is that it's very volatile. It depends on the markets, consumer confidence and when people decide to sell investments and pay a tax on the proceeds. Many states are likely to see their income tax revenue increased for 2012 and then reduced in 2013 because taxpayers decided to sell off capital assets before the end of last year in anticipation of higher rates being imposed by the federal government. California, for example, predicted that capital gains taken by residents will increase nearly 70 percent in 2012 over the previous year.

Sales tax collections, on the other hand, have been somewhat lackluster, primarily because so few services are taxed and because of the difficulty of collecting taxes on items bought online. The sales tax accounts for about 30 percent of general revenue for the 45 states that have a sales tax.

States were hoping that Congress would approve legislation last year requiring online retailers to collect sales tax, thus providing as much as $23 billion for states and localities. That did not happen. Instead, the issue is more likely to come up as part of a broader tax reform debate in the Congress in 2013. “That's another year lost,” Dan Crippen, executive director of the National Governors Association, said in December. In the meantime, states will continue to work out separate deals with on-line retailers, as many have done with Amazon. That company's latest agreement came in December with Massachusetts, where it will start collecting sales taxes November 1, 2013.

In the meantime, U.S. companies are sitting on nearly $2 trillion in cash and other liquid assets, waiting for the economy to reach more solid footing before they hire or invest in capital. Once they do, that activity would boost national and state economies. But businesses continue to hold off in large part because of the uncertainty from Washington. “All these self-inflicted wounds put a lot of pressure on this fragile recovery,” says Sujit CanagaRetna of CSG.