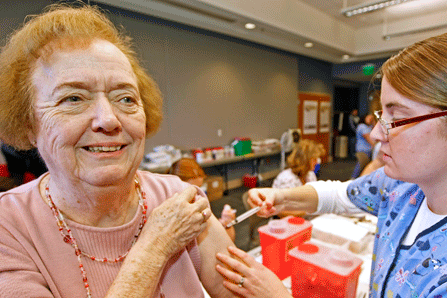 Since the Affordable Care Act became law in 2010, states have known they would have a choice about whether to run their own health insurance exchanges or let the federal government do it for them. But with only eight months left before those online marketplaces are expected to open to the public, Utah hasn't made up its mind.

Utah is one of several Republican-led states weighing an eleventh-hour decision about whether to set up a state-run exchange. But it is a special case because it is one of only two states, the other being Massachusetts, that already has a functioning insurance exchange. In both states, the exchange was the brainchild of a Republican governor eager to promote free market competition.  But once the concept became integral to the success of President Obama's federal health law, Utah and many other Republican-dominated states resisted it.

The Obama administration has a strong interest in convincing red states to establish their own, tailor-made insurance exchanges keyed to their particular needs. To that end, the U.S. Department of Health and Human Services has vowed to give states as much leeway as possible. Utah is a test of that commitment.

As soon as the federal health law was enacted, Democratic governors jumped at the opportunity to set up their own exchanges, which are expected to serve 30 million Americans. Their states have received millions in federal grants to create the online marketplaces and call centers where individuals and small businesses will be able to choose between competing insurance plans that meet federal coverage standards.  Individuals also will be able to sign up for federal insurance premium tax credits and enroll in Medicaid through the exchanges.

GOP governors put off the decision on whether to launch state-run exchanges in hopes that either the Supreme Court would strike down the health law or Republican Mitt Romney — ironically, the Massachusetts governor who championed the exchange in that state — would become president and repeal it. Once those possibilities evaporated, most Republican governors decided to let Washington run their exchanges. A handful of states, some headed by Republicans and others by Democrats, elected to create joint state-federal exchanges.

Utah's Republican Governor Gary Herbert asked Washington right after the elections to accept his existing state exchange as compliant with the federal health law — pretty much as is.  In response, Utah received “conditional” approval from the U.S. Department of Health and Human Services last week. But the conditions include changes to Utah's exchange that state officials say the governor may not be prepared to make.

That leaves Utah's decision about whether to run an exchange up in the air. But even if the governor were in full agreement with Washington, he would need final approval from the state legislature, which meets January 28.

So far, Utah lawmakers have been solidly against a state-run exchange. In fact, a law was enacted in 2010 preventing the state from seeking any federal money for the project.  And despite the governor's recent request for the flexibility to convert its existing exchange into a health law-compliant exchange, many in the legislature still oppose the idea.

One influential lawmaker, however, has an alternative. Republican Representative Jim Dunnigan, the  chair of Utah's Health System Reform Task Force, says it's clear the federal government isn't going to give Utah the leeway it needs to run its own exchange. Instead, the state should maintain its existing small business exchange and let the federal government build a new site for consumers.

One thing working in Utah's favor, at least from Herbert's point of view, is that the state's existing exchange has been a success. It includes 140 health insurance plans and has sold coverage to 326 small businesses employing 7,890 individuals. The site uses what it calls a “defined contribution” approach that allows employers to decide how much they want to contribute to their employees' health insurance and then select a list of policies employees can choose from.

Of the companies served by the exchange, 67 percent had no prior coverage for their employees, and 92 percent renewed their policies after the first year. The exchange is working with 789 insurance brokers across the state to expand the number of businesses it serves, according to the governor's office.

But the site has its critics. Unlike the one in Massachusetts, the Utah exchange — now called Avenue H — does not vet insurance policies or negotiate for the lowest prices. Built in 2009, the website was designed to let all insurance carriers offer their policies to small businesses as a way to promote competition.

As a result, critics say, many small businesses that have visited the site find the policies too expensive and look elsewhere. Utah has about 60,000 businesses with fewer than 500 employees, according to the U.S. Small Business Administration. Covering 326 businesses after two years of operation is hardly an achievement, they add.

So far, Avenue H does not offer comparison shopping for individuals, but Herbert says the state always planned to extend the service to consumers. In fact, the plan also envisioned a tool that would allow people to pull together funding from various sources —which could include federal tax credits — to purchase their policies.

Since November, Herbert and the Obama administration have been swapping letters about whether Avenue H will pass muster under the health law.  If Washington agrees to approve Avenue H in its current form, Herbert has said he would join three other Republican-led states, Idaho, Nevada and New Mexico, in creating a state-run exchange.

“I want the Utah exchange to survive and thrive as we originally envisioned it,” Herbert wrote to President Obama ;ast month. “In fact, I hope it becomes a model for other states to use as a platform for their own versions regarding health care reform.” In subsequent letters, Herbert outlined his plans for expanding Avenue H to serve individuals and larger businesses.

HHS Secretary Kathleen Sebelius promptly replied to his letter, promising that her staff would work with the state to expand its existing exchange. Herbert thanked her, but made it clear what the state would and would not do to comply with the health law. Within days, Sebelius gave the Utah exchange a conditional stamp of approval. The state is expected to give HHS more details on its plans on February 1.

The problem for Utah is that the agency's approval came with a long to-do list. “That wasn't what we wanted to hear,” says the governor's exchange chief, Patty Conner. “We wanted to hear that they would approve the exchange that we have. I think we have a different definition of flexible.”

Conner says she and her staff are committed to dramatically expanding Avenue H according to their own plans, not the check lists and timelines forwarded by HHS. She says she's confident the site will be ready to receive consumers by October 1, and will provide most of the services outlined in the federal health law. She intends to use a seamless software patch to link Avenue H to federal premium credits and Medicaid forms.

Behind the scenes, officials in the governor's office say they're mystified by Washington's approval letter. “Utah's position on our state health exchange has not changed and it will not change,” wrote deputy staff chief Ally Isom in an official response. “Of course we'll review the HHS announcement and determine if the conditions are acceptable or reasonable for our state exchange — and that includes sitting down with legislators — but there is nothing about Utah's path that changes as a result of today's announcement.”