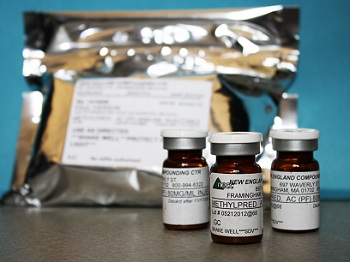 Vials of the injectable steroid product made by the New England Compounding Center and implicated in a fungal meningitis outbreak.

Far from triggering a quick fix, the deaths or illnesses of 620 people in 19 states that have been linked to a Massachusetts pharmacy have only underscored confusion over how to regulate the various types of drug-makers in the United States. All that's clear at the moment is that the present federal-state regulatory divide isn't working.

“This is the time that we have to get this right,” Cody C. Wiberg, executive director of the Minnesota Board of Pharmacy, said last month  after attending a hearing convened by the U.S. Food and Drug Administration. One of the ideas the FDA floated at that hearing was a bigger role for states in the regulation of drug-making, a role for which some believe they are ill-equipped.

The Centers for Disease Control traced a rare form of fungal meningitis to contaminated steroids made and sold by the New England Compounding Center, a now-shuttered pharmacy in Framingham, Massachusetts. That word “compounding” in the company's name is at the heart of the ongoing debate over who is best equipped to ensure the safety of the nation's drug supply.

Federal law divides drug-making into two categories: manufacturing, which requires federal oversight, and compounding, which falls under the authority of state pharmacy boards.

Manufacturing refers to the mass production of drugs for far-flung markets. Compounding, as the term has traditionally been used, refers to the practice of licensed pharmacists customizing medications to the needs of a specific patient at the direction, via prescription, of that customer's doctor.

A pharmacist might, for example, add cherry flavoring to a medicine to coax it down a child's throat or remove a dye or preservative to which a patient is known to be allergic. In the words of Sarah Sellers, a consultant on drug safety and former member of the FDA's Oversight Committee on Pharmacy Compounding, “The traditional role of compounding is a problem-solving process that is undertaken when a patient cannot receive an FDA-approved product.”

Compounding has been a component of pharmacology since the profession's beginnings, but it receded to the background as large scale drug manufacturing took hold in the 20th century. In the United States, the Food and Drug Administration became the regulator of mass drug manufacturing while leaving it to the states, which license pharmacists, to keep an eye on the limited compounding performed by drugstores.

But in the last decade or so, compounding has grown beyond its traditional function of addressing the needs of individual patients. Much of the change was spurred by the emergence of so-called “bioidenticals,” anti-aging products that are claimed by their makers to be superior “natural” alternatives to FDA-approved hormone-replacement products. The FDA and a number of medical organizations dismiss those assertions as unproven, notably because these new “naturally occurring” products have not been subjected to the sort of rigorous FDA testing performed on conventional hormonal preparations.

Through lobbying and some favorable court decisions, the makers of these new products have successfully argued that they are not manufacturers but compounders and therefore are not subject to the lengthy and costly requirements of FDA oversight. Today, according to Global Industry Analysts, anti-aging products, of the sort promoted by celebrities such as Suzanne Somers and Linda Evans, represent an $80 billion industry in the United States.

The success of the anti-aging industry paved the way for thousands of pharmacy compounders to expand their activities far beyond the old, one-patient, one-prescription standard. They have developed products in bulk and shipped them to hospitals and clinics all over the country. Because they do not submit their products for FDA testing and approval, these compounders are seen by some as very nearly heroic for providing drugs at a fraction of the price pharmaceuticals would charge.

One example is a synthetic form of the hormone progesterone, produced by compounders for pregnant women to help them avoid preterm births. The cost to consumers charged by compounding companies was about $10 to $20 a dose or about $400 for an entire pregnancy. When KV Pharmaceutical finally put an FDA-approved version on the market in 2011, the initial price was $1,500 a dose or a total of $30,000 per pregnancy, an amount that caused an outcry among patients, obstetricians and even members of Congress. Under enormous pressure, the FDA issued a statement saying that it would not seek enforcement action against the compounded synthetic progesterone, though critics argued that the scale of production meant it should have been treated as a traditional manufactured drug.

Moderate prices aren't the only public good compounders say they provide. Because compounders have the same access to ingredients as pharmaceutical companies, when flash drug shortages occur, hospitals and clinics often turn to compounders to keep vital medications on their shelves.

But many consumer advocates say compounders, particularly those producing products in large quantities, are circumventing safety standards that were put in place for essential public health reasons. “When someone is manufacturing for a wide population,” says Sellers, “and the FDA hasn't done a risk assessment and the doctor hasn't done a risk assessment for individuals, then what you have is a reckless disregard for public health and safety.”

Many blame the FDA for giving a wide berth to compounders who are clearly producing medicines on a large scale for delivery to multiple states. By any definition, they say, the New England Compounding Center was operating as a manufacturer and should have been shut down long ago by either state or federal regulators.

“It has been a regulatory failure that allowed [large compounders] to grow unfettered to the disadvantage to the public health,” says Randy P. Juhl, professor of pharmacy at the University of Pittsburgh and former chairman of an FDA advisory committee on compounding.

Public Citizen, the consumer advocacy organization, has detailed many cases in which the FDA issued warning letters to compounders for mass production of products without individual prescriptions and for introducing into the market medications that resulted in deaths or illnesses.

Yet after these warnings, says Michael Carome, deputy director of Public Citizen's Health Research Group, the FDA did not follow up.

Can States Handle It?

The FDA's reticence is partially the result of lawsuits brought by compounders challenging the agency's statutory authority to regulate them. In one of the most prominent cases, in 2002, the Supreme Court ruled that prohibiting compounders from advertising was a violation of their First Amendment rights. The compounders claim that decision prevents the FDA from any oversight of their activities. But others, including Public Citizen, say the ruling does no such thing.

“The FDA definitely has the authority to regulate drug manufacturing that's conducted under the guise of compounding,” says Carome.

For their part, compounders say that the states are best suited to regulating their industry. In a prepared statement, the International Academy of Compounding Pharmacists wrote that it “believes that state boards of pharmacy are the appropriate authority to regulate pharmacies, in that it is the states that regulate all other medical professions and providers, such as physicians, nurses, and hospitals.”

But critics maintain that states are not equal to the task of regulating big compounders. “State boards are not trained in public health and there's no evidence they are proactively overseeing these practices,” says Sellers. “The second point is the state boards are licensing entities. They aren't public health entities with the authority to enforce public health laws.”

Few if any states have suggested they'd like the added responsibility of overseeing large-scale compounders, even if they have faith in the expertise of their staffs to do so. And many do not have that expertise. “Some states are equipped to do it, and others aren't,” says Minnesota's Wiberg.

Her proposal involves dividing drug-making into three categories: manufacturing, traditional compounding, and non-traditional compounding.  Compounders in that last category would be able to produce medicine in larger quantities, to ship across state lines and to bypass certain federal regulations, but would be required to observe yet-to-be-determined manufacturing safety requirements. Under her proposal, large-scale compounders would have to register with the FDA but inspection responsibilities would fall to the states.

Carmen A. Catizone, executive director of the National Association of Boards of Pharmacy, says the states are not opposed to such a plan, providing the requirements are clear and the states have the necessary expertise.

Consumer advocates, including Public Citizen, have reacted harshly to the proposal. Carome says he suspects the FDA is trying to unload a labor-intensive responsibility onto the states while also seeming to address the issue of drug shortages.

Carome and other critics insist the conventional line between compounding and manufacturing ought to be  perfectly clear: If medication isn't produced for one patient with a prescription from a licensed medical provider, then it is by definition manufactured and therefore subject to FDA regulations. To these critics, nothing – not the risk of drug shortages nor high drug prices -- justifies lowering safety standards. That just invites another New England Compounding Center disaster.

“If the FDA would just say we want to regulate manufacturing and these pharmacists are manufacturing, you're home free,” says Juhl. “That's the easiest way to approach this.”

No legislative correction seems imminent. Many members of Congress are unlikely to be friendly to any FDA compounding proposals when they believe FDA failures contributed to the New England Compounding Center debacle. The regulatory muddle will continue.