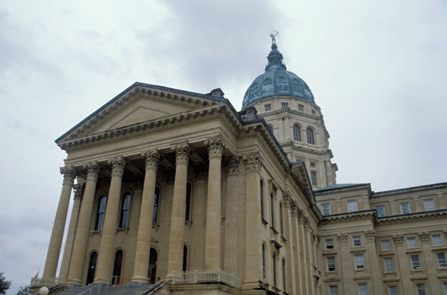 In 2012, Kansas Governor Sam Brownback succeeded in winning large income tax cuts for individuals and small businesses, a victory that conservatives nationally hailed as a model for fiscal and economic policy. In 2013, Brownback might well ask for a tax increase — or at least something that looks a lot like one.

Brownback hasn't changed his small government philosophy. Instead, he has indicated he wants to make up for some of the revenue that last year's tax reductions will cost the state.

Brownback had wanted to make a temporary sales tax increase permanent and end major tax credits, deductions and exemptions as way to offset some of the lost revenue from the income tax cuts. Those ideas failed to survive last year's legislative process. Now, Brownback has signaled he will bring them back in some form.

What's not clear yet is what Brownback intends to do with the money the state would take in. Kansas faces a budget shortfall in the fiscal year that begins July 1 and Brownback has said he wants to protect funding for major parts of state government, including education and public safety. New revenue would help achieve that goal.

Yet some of Brownback's closest allies insist that, if the state is going to raise additional revenue, it use the money for a new round of income tax cuts. That would bring the state closer to Brownback's goal of eliminating the income tax entirely. But it would also force deep and politically controversial spending cuts.

This decision will help shape the future of one of the most consequential state fiscal experiments going on anywhere in the country. The belief of Brownback and other conservatives is that the income tax cuts will ultimately lead to economic prosperity and revenue growth and, in doing so, set an example for other states. But no one expects that to happen overnight. In the meantime, the state could face several years of significant fiscal shortfalls.

Last year's measure cut the state's three income tax brackets (6.45 percent, 6.25 percent and 3.5 percent) to two (4.9 percent and 3 percent). It eliminated income taxes entirely for nearly 200,000 small businesses. It also included some measures to compensate for the cost of the cuts, such as the elimination of a child care tax credit, a food sales tax refund and a property tax refund for renters. But it didn't touch many of the large credits and deductions Brownback had targeted, including the mortgage interest deduction, the charitable contribution deduction and the earned income tax credit that benefits low-income workers.

What these changes will mean for the Kansas economy over the long-term is a matter of intense debate. A study by the state Department of Revenue predicted 23,000 new jobs for the state by 2020, above and beyond the job growth Kansas otherwise would have experienced. Others are skeptical. A forecast from the Kansas Legislative Research Department, which didn't account for any economic benefits from the tax cuts, said that they will result in a series of shortfalls that add up to $2.5 billion through fiscal year 2018.

Short-term, though, there's no debating that the tax cuts will blow a major hole in the state's budget. The tax cuts only went into effect yesterday, on January 1. While supporters hope that some mobile small businesses will come across the Missouri border quickly to take advantage of the business tax reduction, larger shifts will take time. “There are a few businesses where it's relatively easy to pick up and move,” says Dave Trabert, president of the conservative Kansas Policy Institute.  “It just takes longer to pick up a plant. That's going to be a two, three, four-year process.”

Brownback hasn't yet announced his plans for closing that shortfall. Nor has he formally announced his support for extending the sales tax or eliminating credits and deductions. “The governor is still finalizing his 2013 agenda and budget,” Sherriene Jones-Sontag, Brownback's communications director, said in an e-mail message. Still, Brownback and his administration haven't exactly been shy about speaking on the subject.

Steve Anderson, Brownback's budget director, said in December that the governor will ask for the sales tax to stay at 6.3 percent instead of falling to 5.7 percent on July 1 as scheduled, then use the money for a new round of income tax cuts. Yet when Brownback spoke in December about maintaining the higher sales tax rate or going after credits and deductions he “vowed to support funding for education, public safety and medical services for the poor,” according to the Kansas City Star. “I am going to do everything I can to protect those three categories,” Brownback said.

The few Democrats in the Kansas legislature, most of whom voted for the sales tax increase and promised it would be temporary, say they aren't going to support keeping it regardless of where the revenue will go. “If they make the current sales tax permanent,” says Nile Dillmore, ranking Democrat on the House Taxation Committee the last two years, “that is in effect a tax increase and it's a regressive tax.”

For some Brownback allies, however, whether the money goes to new income tax cuts or to support spending is a key distinction. Kent Eckles, vice president of government affairs at the Kansas Chamber of Commerce, notes that many Republican legislative candidates won in 2010 pledging to repeal the sales tax hike. He says his group would be open to keeping the higher sales tax rate only if it were used for new income tax cuts.

Trabert, who was on hand at the signing ceremony for the tax cut last year, draws a harder line. “There's no need for a sales tax increase. There's no need for changing deductions or anything like that,” he says. “We have to get our tax burden down and you just shift it if you reduce one tax and increase another.”

Arguments like that raise the possibility that Brownback, the conservative hero of 2012, could face strong opposition from conservatives in 2013. But most people in Kansas don't seem to think that's likely.

For one thing, Brownback may find a creative way to deal with the budget shortfall in the absence of new revenue. The governor is asking legislators to switch from annual to biennial budgeting. A two-year time frame could change the outlook.

Plus, many legislators owe Brownback a lot. He was instrumental in conservatives' legislative victories in 2010 and 2012, especially in Republican primaries last year that ousted eight moderate senators, shifting control of the chamber to the right.

Even if it means voting for something that could be interpreted as a tax increase, loyalty to Brownback may trump ideological purity. “He has little to no impediments,” Dillmore says, “to driving his agenda as quickly and efficiently as possible.”