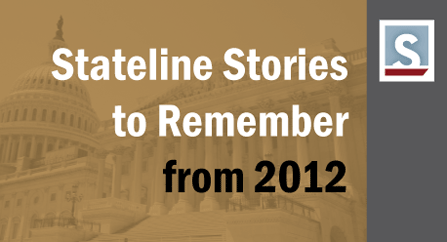 Stateline reporters traveled to states all over the country in the past year covering issues ranging from right to work legislation in Indiana to the expanding role of nurse practitioners in Virginia. They reported on general election contests for governor, recall elections in Wisconsin and ballot measures in North Carolina and elsewhere that will shape state policies for years to come. The following are some highlights from Stateline's reporting this year.

Some 11 states held gubernatorial elections, and Stateline visited all the close campaigns. In Montana, the election was shaped as much as anything by the state's recent oil boom and the challenges it has created. The state already faces difficulties in meeting the infrastructure and service needs created by the boom. Among the larger issues is the question of how to ensure that the Montana economy is sufficiently diverse that it doesn't rise and fall with the price of a barrel of oil.

Most states did not have gubernatorial elections, but nearly all had tumultuous legislative sessions generated by the Republican landslide of 2010. The landslide gave Oklahoma Republicans full control of the legislature and the governor's mansion, a concentration of power they had not achieved in state history. During the legislative session that followed, as Stateline reported, the new Republican majority ushered in changes to workers compensation and civil lawsuit rules, passing legislation the business community had prioritized for decades.

Indiana's brief legislative session took center stage early in 2012, when Republican majorities in the legislature passed right to work legislation, making it illegal for companies to require their employees to pay union fees.  Statelinelooked at how the legislation would affect companies such as auto manufacturer Remy International, which said its plans for a new factory in the state were contingent on enactment of the legislation. Republican Governor Mitch Daniels signed the measure into law in February. In December, Michigan followed suit, adopting the legislation over fierce union opposition.

For an illustration of the impact different tax policies can have on a state – and its neighbors – Statelinetraveled to Vancouver, Washington, where businesses charging an 8.4 percent state and local sales tax rate face competition from businesses in nearby Portland, Oregon, where there is no sales tax. While economists estimate that the Vancouver area loses about $100 million a year in sales tax revenue, they say the benefits of proximity to bustling Portland outweigh the dollars foregone.

In some towns in Michigan's Upper Peninsula, residents are weighing different sorts of costs as mining picks up in the areas where it began 150 years ago. That 19th century mining boom left environmental byproducts – such as polluted lakes – that towns are still recovering from, and some environmentalists worry that the current boom will create similar problems.

Legislators everywhere are grappling with the problem of how to improve schools, but growing numbers in a few states are bringing to the table a special kind of experience. Alumni from the national Teach for America program, which places recent college graduates in struggling schools for two-year teaching stints, are starting to find their way into statehouses and onto state boards of education. Many have strong ideas about how schools should change, ideas which aren't always welcomed by other legislators and some teachers unions.

The fate of poorly performing schools is often intertwined with that of poorly performing cities, and one program in Pennsylvania, known as Act 47, aims to help those cities improve. It's had a mixed record so far. The program has helped six cities improve their fiscal status sufficiently to be removed from the danger list, but most haven't shown the same success. Two cities, Aliquippa and Farrell, have been in the program since it first began 25 years ago. These cities have been battered by recessions, but have also taken on specific problems of their own, struggling with employee pension costs and other debt obligations that they can't afford.

One of the most important events of 2012 could create a wedge between states and the federal government. Months before Washington and Colorado voters approved legalizing marijuana for recreational use, Stateline looked at what approval could mean in those states, and some of the complications that it will present.

One state is entering new territory when it comes to the services, and rights, it provides its residents. Rhode Island became the first state to pass a Homeless Bill of Rights, which protects the homeless from facing job and housing discrimination and affirms that they have as much right as anyone to be in public spaces such as libraries and parks. Most states in recent years have gone in the opposite direction, cracking down on loitering and panhandling, and Rhode Island advocates for the homeless say they hope to spread their idea to other states in the future.