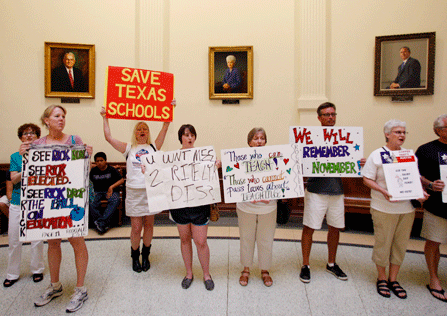 Next month in an Austin courtroom, two-thirds of the school districts in Texas will resume their argument that the state's school finance system is inadequate and inequitable and that it creates a de-facto statewide property tax, forbidden by the state constitution.

The school districts filed their lawsuit in October 2011, but Texas has been here before: Since 1984, the state's school finance system has been challenged six times, most recently in 2005. In that case, the Texas Supreme Court ruled in favor of the state, but schools have won earlier rounds of litigation.

Lynn Moak, a lobbyist for school districts and former executive deputy commissioner at the Texas Department of Education, has been a witness in all six trials.

“It's sort of a personal history of my last 30 years,” he jokes.

While the arguments in the current case aren't new, Moak says that the case—which is actually the combination of six separate lawsuits—represents a broader coalition of plaintiffs than in the past.

“It's a relatively united public education community,” he says, “which has been rare.”

Texas isn't the only state facing a legal challenge to its school-funding system. Next month, a three-judge panel in a Kansas District Court is expected to rule on a lawsuit arguing that that state isn't spending enough on education. And next spring, the Colorado Supreme Court will review last year's District Court ruling that the state's funding system is “unconscionable” and does not meet the state constitution's requirements for a “thorough and uniform” education system. If they lose in court, Colorado and Kansas might have to spend billions more on education.

Overall, ten states have school finance challenges working their way through the courts, according to the National Conference of State Legislatures (NCSL). Four other states recently wrapped up legal challenges.

But school-funding advocates have found that winning a lawsuit doesn't necessarily improve the quality of education—or even boost funding over the long term, as funding formula changes and budget cuts can eat into court-mandated increases.

“Some argue that the status quo before the litigation eventually comes back into place,” says Dan Thatcher, an education finance expert at NCSL.

In 1973, the U.S. Supreme Court held that San Antonio's financing system was not an unconstitutional violation of the 14th Amendment's “equal protection” clause because education is not a constitutional right. But a footnote in Justice Thurgood Marshall's dissent in the case made clear that there was no obstacle to challenging school finance plans at the state level. Since then, all but five states—Delaware, Hawaii, Mississippi, Nevada and Utah— have experienced school funding lawsuits.

Broadly speaking, the legal arguments in school-funding cases have evolved from equal protection claims in the 1960s and 1970s to lawsuits that focus on the states' responsibilities under the education clauses in their constitutions. “All states have a provision for education as a positive right,” says Molly Hunter, director of Education Justice, the national arm of the Education Law Center which has successfully argued cases for more funding in New Jersey.

The education-clause argument has been far more successful than the equal-protection argument, Hunter says. Advocates for more funding have focused on “equity,” or whether state funding laws favored some districts over others, and more recently on “adequacy,” or whether the state provides sufficient resources for all students to meet state or federal education standards.

Some argue that in most of the “adequacy” cases courts are still using an “equity” lens to determine whether disparities between districts are evidence that some students haven't been given an adequate education. But the increasing emphasis on ratcheting up standards could make “adequacy” lawsuits more prevalent, experts say.

What's harder to say is whether that's a good thing, and whether students actually win when these lawsuits are successful.

Jim Ryan, a law professor at the University of Virginia, has argued that trying to prove the inadequacy of school funding through test results could provide perverse incentives for states to water down standards.

“One way to make education cost less is to lower the goals of education,” he says.

It also might prompt states to maintain funding disparities if testing results are comparable, or to “fund to the test,” rather than trying to meet broader educational goals. That could improve under the national Common Core academic standards that 45 states have adopted, but Ryan says there are other ways to demonstrate inadequate funding without relying on test scores.

What Happens After a Ruling

Washington state, one of only two states entering 2013 with a budget deficit, lost its own school-funding case a year ago. But the state Supreme Court didn't mandate a required level of funding or a way to achieve it.  That's not unusual.

“The problem with these cases is that the courts don't provide a clear way forward or a remedy,” says NCSL's Thatcher.

While declining to prescribe a specific remedy, the Washington the Supreme Court is requiring that legislators provide an annual progress report for the next six years. Courts in New Hampshire and New Jersey also have remained actively involved in school funding decisions years after lawsuits were resolved.

“These school finances cases never end,” says Michael Griffith, a school finance consultant for the Education Commission of the States.

But courts typically don't specify how states must raise additional money for schools, which could present problems if they mandate increases in tax-averse Colorado and Texas. Colorado's constitution includes  a “Taxpayer Bill of Rights,” or TABOR, which limits budget growth.

The different paths taken by Wyoming and Kansas, where courts ruled against the state, illustrate the funding challenge.

Through a series of decisions from 1995 to 2008 known as the Campbell rulings, the Wyoming Supreme Court played an active role by mandating minimum teacher salaries and laying out policies for equitably funding school facilities across the state. Those mandates have made the state among the most generous in the country for teacher salaries, which has drawn teaching candidates to Wyoming schools from across the country. School funding increases in Wyoming have been helped by the state's abundant natural resources.

In Kansas, funding court-mandated increases has been more of a challenge. After a protracted battle between courts and the Kansas legislature, in 2006 state lawmakers increased funding overall and funneled a disproportionate amount of the new money to needy districts. Those changes prompted the Supreme Court to finally close the Montoy school-funding case.

But that was before the recession, which spurred Kansas to cut hundreds of millions of dollars from education. As a result, this year's state education budget is 13 percent less, when adjusted for inflation, than in the 2007 school year, according to the Center on Budget Policy and Priorities. The cuts triggered the current school- funding lawsuit.

It will be a while before schools in Texas, Colorado, Kansas and other states see any change in funding related to these lawsuits.

The Texas budget that will be introduced next month by Governor Rick Perry won't reflect any change in education funding related to the threat of court action, says his spokeswoman Lucy Nashed.

“We don't make decisions based on things that haven't happened yet,” she says.

What Texas and other states can likely count on is future school-funding litigation.

“It will be a continuing option for schools to continue going back to the court,” Moak says of school funding in Texas. “The court has become a part of the process.”